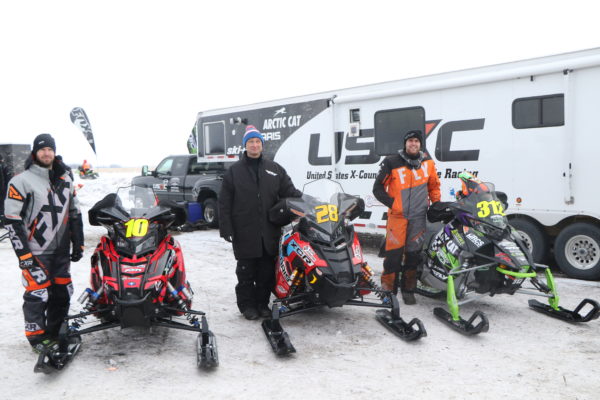 After four rounds of racing action in the USXC circuit, this marks the halfway point of the 2020 USXC season. This past weekend’s racers made their way to the Goodridge/Grygla area for the coveted I-500 race on February 8th& 9th. This event is a favorite for a lot of the racers that compete on the circuit. It is also known to draw in racers from all directions to try and add their name to a short list of racers who have claimed this title. One competitor, Silas Neeposh from Mistissini, Quebec, Canada, drove 24 hours one way to compete! Unfortunately, he blew a shock before completing lap 1 and had to make the long haul home on Sunday morning with a broken sled.

On day one, riders were let off in groups of two 10 seconds apart and according to their highest entered class. Ben Langaas (Arctic Cat) and Justin Tate (Polaris) were the first two sleds off the line. Current points leader Aaron Christensen (Polaris) started eighth and defending I-500 champ, Zach Herfindahl (Arctic Cat), started ninth. Sleds made their way towards the first of 3 fuel stops which was about halfway through the 125-mile loop. Zach Herfindahl showed his speed early and made his way from ninth all the way up to first before the first fuel stop. Justin Tate trailed him staying a consistent second. Bunke (Polaris), Christensen (Polaris), Langaas (Arctic Cat), and Selby (Arctic Cat) came in behind Tate to fuel and continued on their way trying to keep up with Herfindahl. By the end of day one, riders had put on 250 miles with 3 fuel stops as their only breaks. Herfindahl came across the line first with a time of 3:35:22. The Eagle River driver already had over a six-minute lead after day one. Selby made his way past Tate and come across 2ndat 3:41:43. Selby had a solid day making up 12 positions throughout the 250 miles. Polaris riders Justin Tate (3:43:51), Aaron Christensen (3:45:50), and Taylor Bunke (3:46:33) rounded out the top five for day one. Semi Pro and Pro rider Cale Anseeuw had a good day coming across the line eighth leading the pack in Semi Pro. Other Semi Pro riders who made their way through the pack were Marshall Busse (Polaris) passing 15 sleds, Thomas Junglen (Ski-doo) passing eight sleds, Dustin Dohrn (Ski-doo) passing 10 sleds, and Boe Bunke (Polaris) passing 16 sleds. 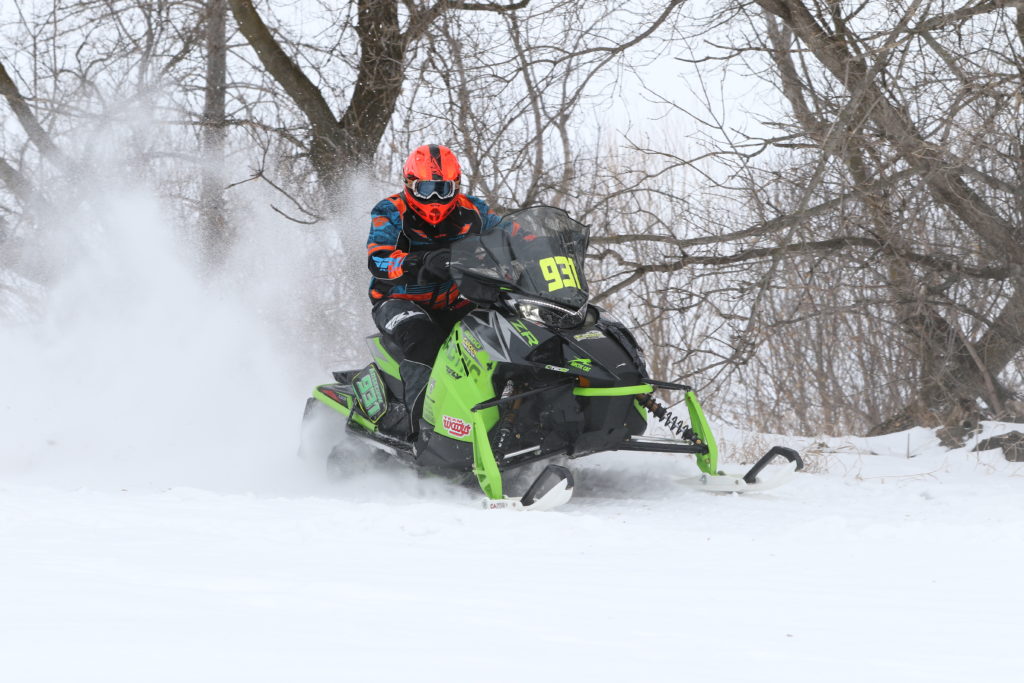 At 3:00 pm on Saturday, riders were given the chance to take an hour work period to tune up their sleds. This took place in a supervised area, so teams had to bring out tools from their trailer to tune up their sleds. Another work session started at 4:15 for sleds that hadn’t yet completed day one of racing. After getting their hour in the work area, sleds had to be staged and teams couldn’t touch their sleds until it was time to fire them up on Sunday morning. 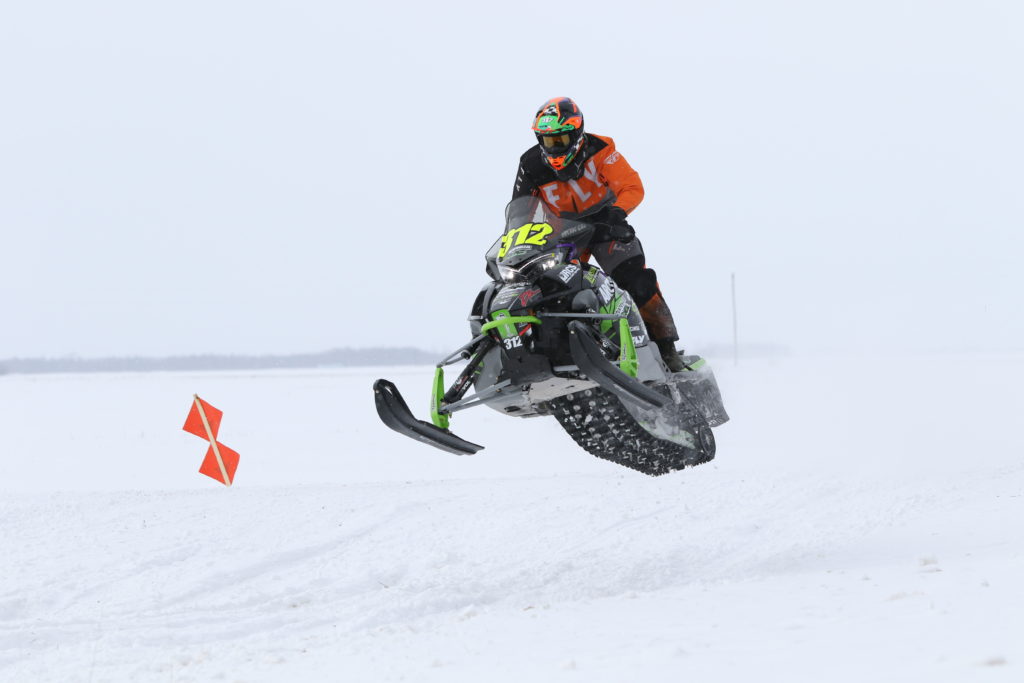 On day two, riders were sent out according to their finishing time from day one. Zach Herfindahl was the first sled off the line. Wes Selby, who was sitting in second, had to wait a full 6 minutes and 21 seconds before given the green flag. After another 2:07, Justin Tate was sent on his way. Aaron Christensen waited 1:59 before given the chance to chase the field. After Christensen, Bunke waited 45 seconds and he and Brown left the line together. Starting at these two drivers, riders were then let off in groups of two 10 seconds apart. Coming into the first fuel stop, Herfindahl stretched his lead out to 7 minutes and 59 seconds. Wes Selby (Arctic Cat) was the driver in second and Justin Tate (Polaris) still in third. Before we knew it, Herfindahl was completing lap one, fueled, and was on his way to complete his final lap of the 500 mile race. Justin Tate came through second after getting around Selby. Sometime during lap one, Selby started having mechanical issues with his sled and when he came in for lap two, was forced to pull into the repair area. While he was there, he changed the clutch and was on his way. During this, Aaron Christensen came in for fuel and was back out before Selby. Brown also got around Bunke but they were bumper-to-bumper the entire day two. By the last fuel stop Herfindahl stretched his lead out to 8 minutes and 23 seconds over Justin Tate. Sleds made their way back to the finish line and Zach Herfindahl brings his #312 Arctic Cat sled to the top of the podium for the first time this season. Herfindahl wins back-to-back I-500 titles after claiming his 3rdvictory in the past 4 years. His total two-day time was 6 hours 52 minutes and 58 seconds. Justin Tate brought his Polaris through in second with the time of 7 hours and 33 seconds. Aaron Christensen rounds out the podium on his Polaris with the time of 7 hours 1 minute and 28 seconds. 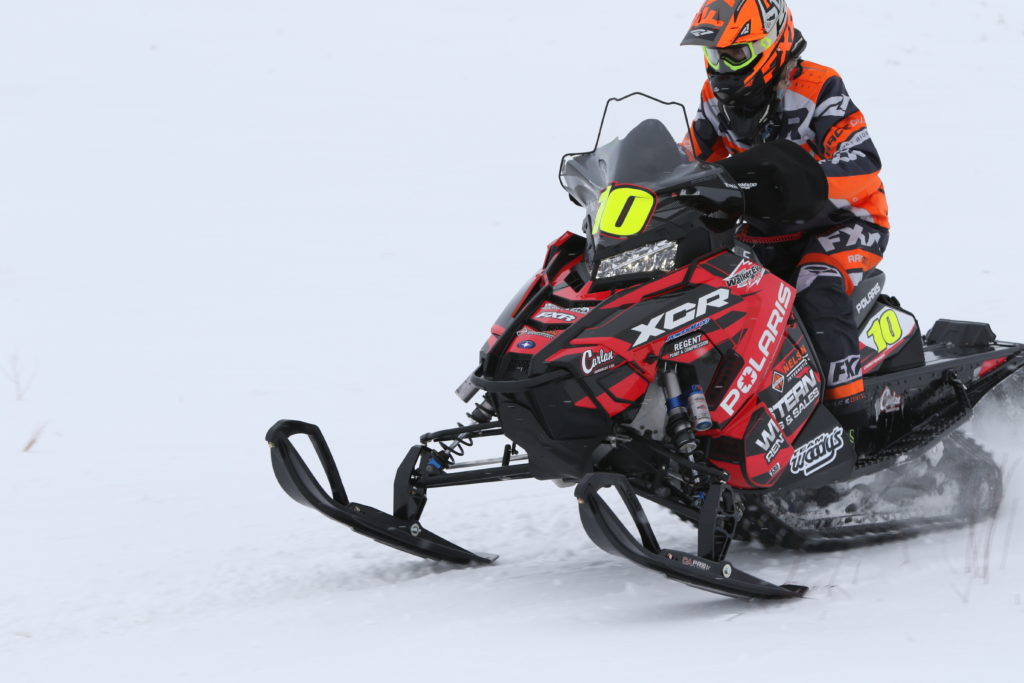 In the Semi Pro division, Cale Anseeuw had a great run winning the class with a time of 7 hours and 9 minutes on his Arctic Cat. Marshall Busse came in second on his Polaris and Thomas Junglen rounded out the podium on his Ski-doo. Marshall Busse also took the win in the Semi Pro Improved class this weekend. In the Sport 600 class, Thomas Junglen took the win with the time of 7 hours and 21 minutes. Ski-doo rider, Lydia Sobeck, was victorious in both the Women’s and Sport 600 Improved divisions. Jesse Hallstrom (Arctic Cat) was also a multi class champ taking the win in both the Junior 14-17 and Expert 600 Limited classes. McKenna Cloose snagged the win in the Junior 14-17 Girls class on her Arctic Cat. In the Masters 40 class, Nick Roehl (Ski-doo) took the win with Jon Arneson winning the Masters 50+ class on his Arctic Cat.

USXC will take next weekend off after a busy two weekends for some of our Pro drivers. We will be back in action on February 22ndin Manvel, North Dakota for the Turtle River Rough Rider 100.