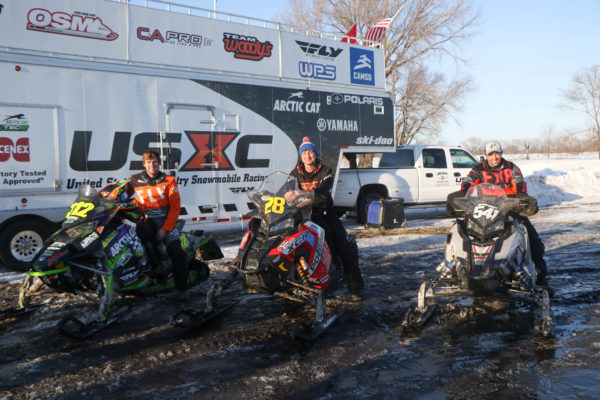 The sun finally decided to shine for a USXC event this year. On Saturday, February 22, teams made their way to Manvel, North Dakota for the Turtle River Rough Rider 100; the fifth USXC event this season. This is our only one day event of the 2019-2020 season making the weekend fly by. Racing started at 10 AM on Saturday with riders given the option to go on a parade lap at 8:45 AM. There was a total of five heat races with riders taking off in groups of two, 10 seconds apart. This was a timed event, so all results were based on total times and not who crossed the line first. 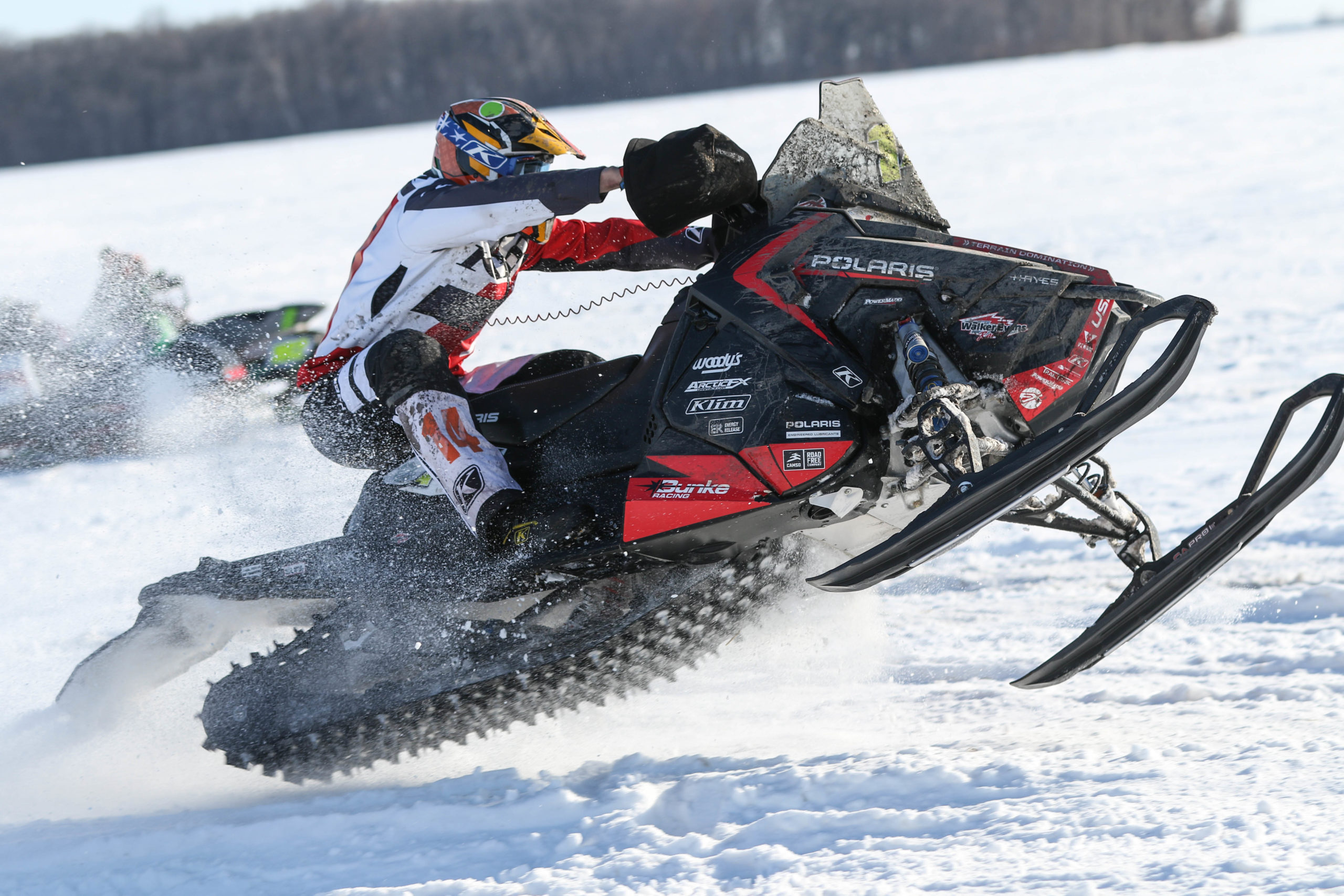 The first heat race of the day was made up of Pro Open, Semi-Pro Improved, and Masters 40 classes. These sleds ran four laps equaling 50 miles. Dustin Dohrn (Ski-doo) and Aaron Christensen (Polaris) were the first two sleds to take the green flag. Unfortunately, shortly into the Pro Open final, Aaron Christensen noticed his back injury was still an issue and paced his sled back to the pits to take a DNF. Christensen was currently sitting second in the Pro Open points standings. Herfindahl (Arctic Cat) showed his speed and made his way up to the lead quickly. Zach ended up taking the Pro Open win with Justin Tate (Polaris) in second and Taylor Bunke (Polaris) in third. Justin Tate remains as the Pro Open points leader after five rounds. Nick Roehl took the win in the Masters 40 class over Craig Ritzinger (Ski-doo) and Eric Christensen (Polaris). In the Semi Pro Improved class, Abe Olson was victorious with Cale Anseeuw in second and Paul Brown in third, all on Arctic Cat machines.

In heat race two, the Classic, Junior, and Vintage classes battled it out. These riders competed in 3 laps (about 40 miles). By heat race two, the Pros had made the ditches pretty rough for these riders. They had to ride smart in order to finish the race. Jesse Hallstrom took the lead quickly in the Junior 14-17 class and was unstoppable. Hallstrom plowed through the rough course and took the win in the Junior 14-17 class on his Arctic Cat. Maverick Broden came through second and Aaden Olson in third, both on Arctic Cats. In the Junior 14-17 Girls class, it was a close battle. Mckenna Cloose and Danika Diesen swapped position on the track the whole race. Cloose came out on top, 10 seconds over Diesen, both on Arctic Cats. Dawson Darco took the victory in the Junior 10-13 class on his Arctic Cat and Reese Novacek won the Junior 10-13 Girls class on her Polaris. The Classic and Vintage riders had an even rougher ride with their minimal suspension. Ryan Derrick showed speed on his Polaris winning the Classic IFS class with a time of 52 minutes and 6 seconds. Doug Ruter hung on for the win in the Classic IFS 50+ class on his Arctic Cat. Ruter and second place runner John Griep have swapped first and second all season. In the Vintage class, Adam Leubner earned his first win of the season on his Arctic Cat. In the Vintage 50+ class, Dave Chambers hung on and finished the race. Being the lone entry in this class he took the win. 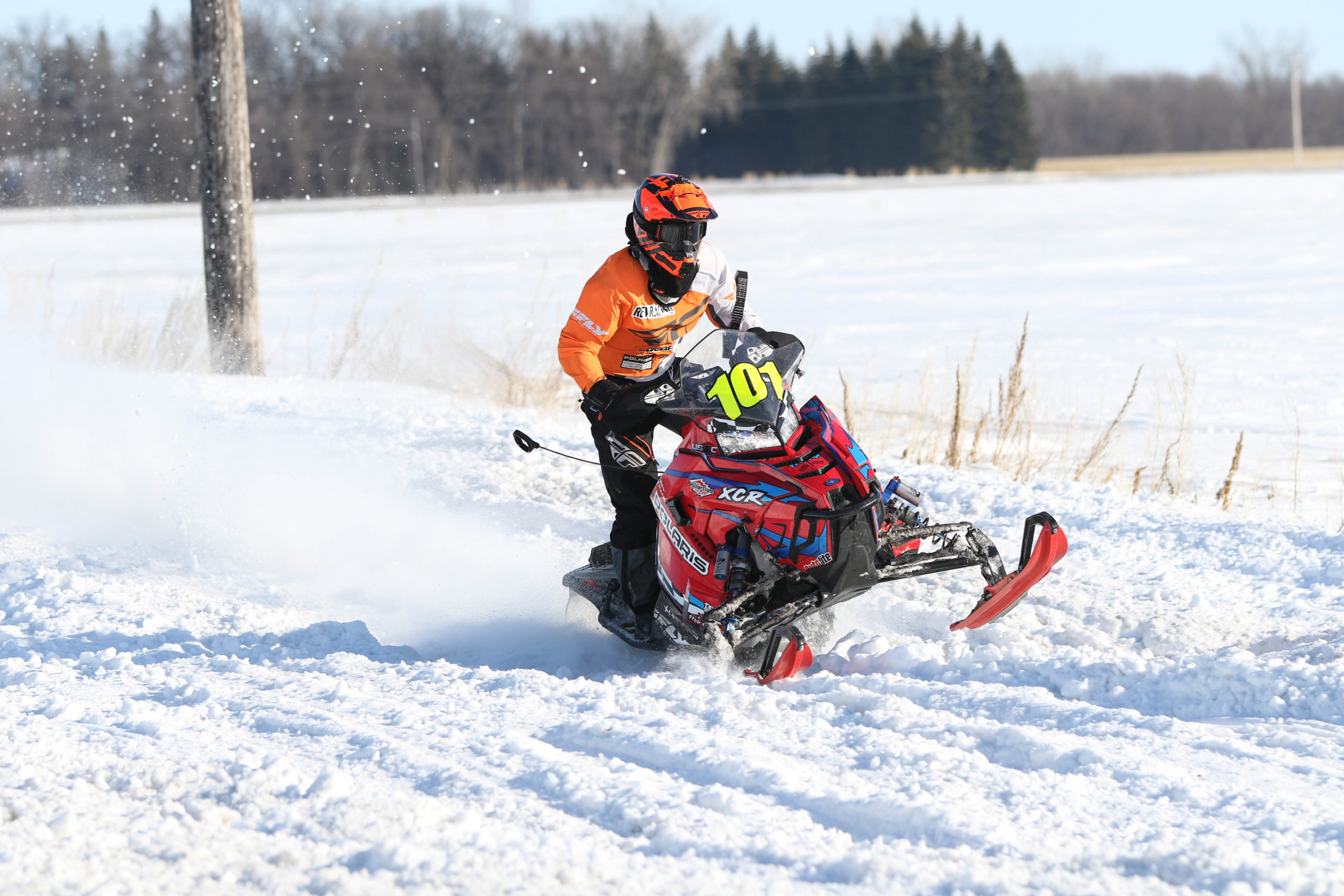 The next classes to take the green flag were Semi-Pro, Sport 600 Improved, and Women. These riders battled it out for 50 miles. Semi-Pro points leader, Marshall Busse, was unable to compete this weekend after sustaining an injury during testing on Friday. The first two sleds off the line were Arctic Cat riders, Matt Feil and Abe Olson. For some of these riders, this is their second time racing on the course after already running the Semi-Pro Improved class so they knew what to expect. After starting 19th, Cale Anseeuw came out on top of the podium after showing speed in the rough. Thomas Junglen earned himself a second place but missed the podium picture due to having to race back-to-back heats. Nick Roehl claimed the third place spot getting himself on the podium twice in Manvel. In the Semi-Pro points standings, Busse was able to hang onto his points lead which is down to 10 points. In the Womens class, Savannah Landrus (Polaris) earned herself another win this weekend over Lydia Sobeck on her Ski-doo. In the Sport 600 Improved class, Cole Boyd (Arctic Cat) was victorious with Evan Peppel (Polaris) in second and Nicholas Nyquist (Arctic Cat) in third.

Heat race four consisted of Masters 50+, Sport 600, and Expert 600 Limited. After coming off the track in the Womens class, Lydia Sobeck was the first sled off the line in the Sport 600 class. The Sport class was filled with racing action with riders changing positions all throughout. Evan Peppel (Polaris) claimed his first Sport 600 win this weekend and took the points lead over Boe Bunke. Eight points separate these two Polaris riders in season points. Neil Jakubowski took second in the Sport 600 class on his Polaris and Cole Boyd came through third (Arctic Cat). In the Masters 50 class, Jim Sobeck took the win on his Ski-doo and Braden Sillerud (Arctic Cat) went home with the win in the Expert 600 Limited class. 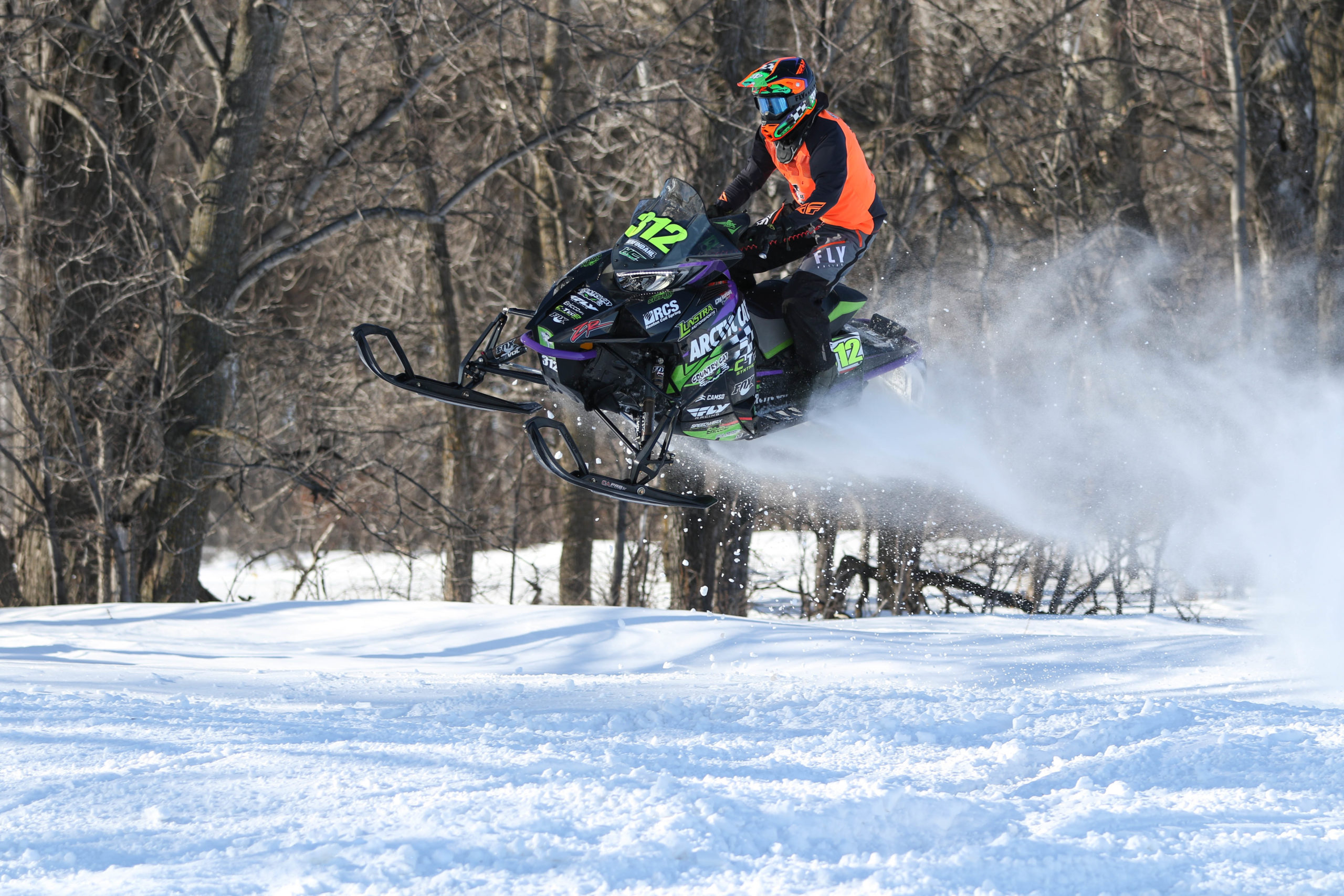 The last race of the day was the Pro Stock final to do battle for 10 laps. Dillan Dohrn (Ski-doo) and Taylor Bunke (Polaris) were the first two sleds to leave the line for the main event. Springer (Polaris) and Herfindahl (Arctic Cat) started side by side in seventh and eighth and Tate in tenth. After one lap of 12.5 miles, Zach Herfindahl had already made his way to the front of the pack and even started to separate himself from the other riders on his Arctic Cat. Polaris rider, Ryan Springer, made his way to second and tried to keep Herfindahl in sight. Justin Tate (Polaris) finished lap one in third battling closely with Springer. Lap two and three looked similar in running order with racers starting to take their mandatory fuel stop. During lap four, Tate got by Springer in a rough ditch section and ran with it. Riders continued to cycle through for fuel and before we knew it Herfindahl had lapped a few riders and took the white flag. After a flawless run in Manvel, Herfindahl swept the Pro classes in round five by taking the checkered flag and win in the Pro Stock class. Justin Tate came through in second and Ryan Springer in third, both on Polaris sleds. Christensen, Lian, and Langaas unfortunately ended with a DNF in the Pro Stock class.

After five rounds of racing, Justin Tate is now leading the Pro Stock points with Herfindahl in second trailing by seven points. Christensen manages to hang on to third, 11 points behind the leader.

USXC will be heading up north to Warroad, Minnesota on February 29th and March 1st for the sixth round of racing. The Seven Clans Casino Warroad 100 is a highly talked about race of every season for both full-season competitors and local riders. 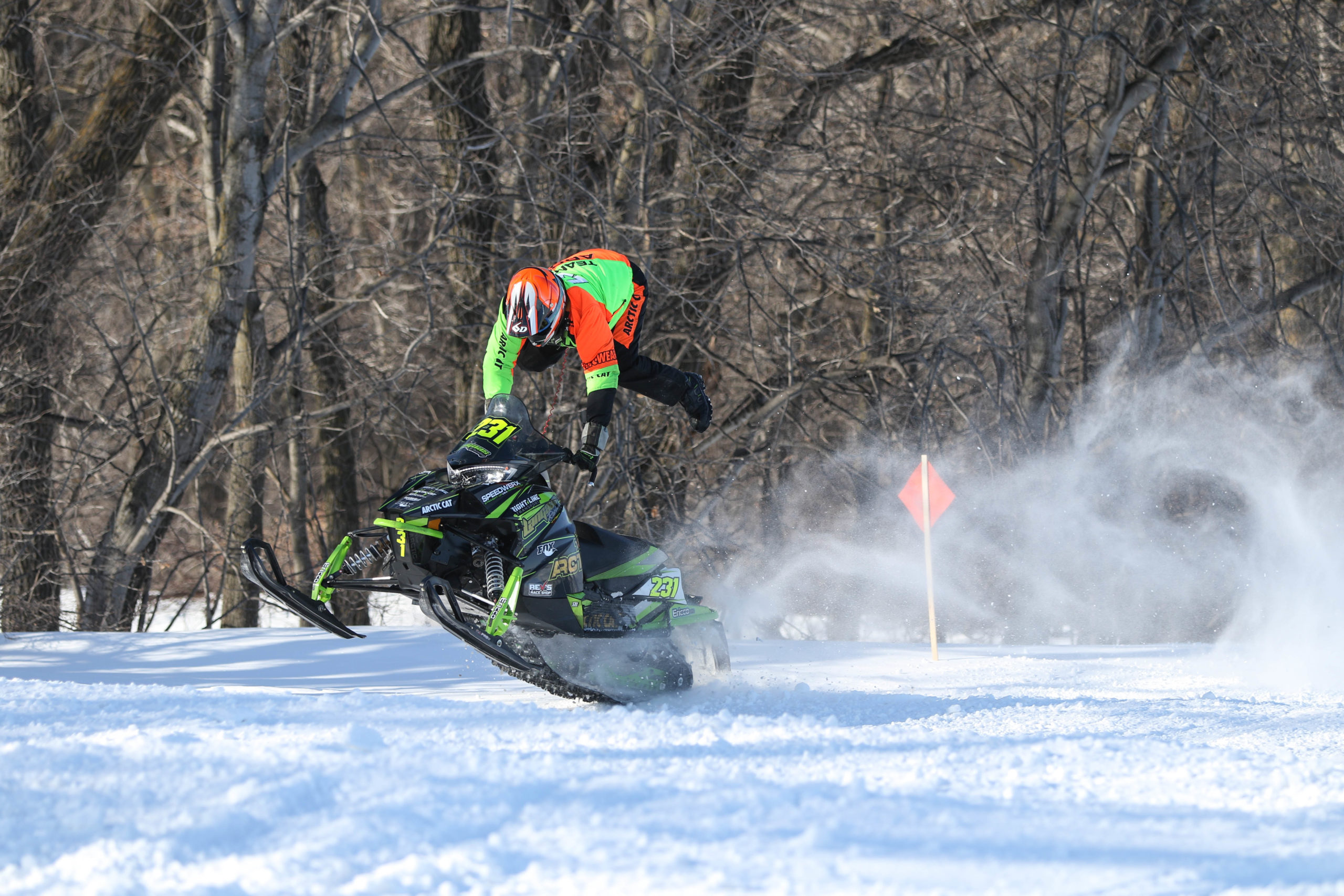