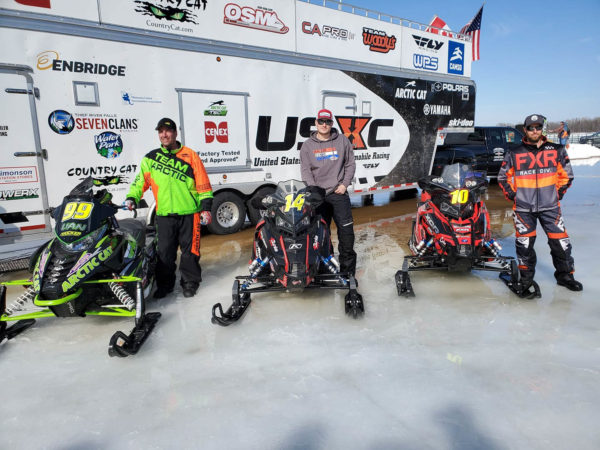 The last ice race of the season took racers to Naytahwaush, MN on March 7th and 8th for round seven of racing action. The sun shined again on USXC with temps reaching 45 degrees, and yes, above zero! The nice weather made it really fun for the fans and teams to watch racing with no winter jackets needed!

The day started at 10 AM with the Pro Open qualifier and the Women’s day one heat. Arctic Cat riders Chad Lian and Ben Langaas were the first two sleds off the line. Those two riders swapped positions all race keeping it interesting out front. Pro rookie David Brown showed his Arctic Cat mod has speed from the beginning of the day finishing as the number one qualifier after race one. Arctic Cat’s Wes Selby, Ben Langaas, and Chad Lian and Polaris’ Travis Faust and Justin Tate were the next top six qualifiers which will make up the front row of the Pro Open final. In the Women’s class, Jill Hetteen showed speed on her Polaris coming across with the fast time for day one. 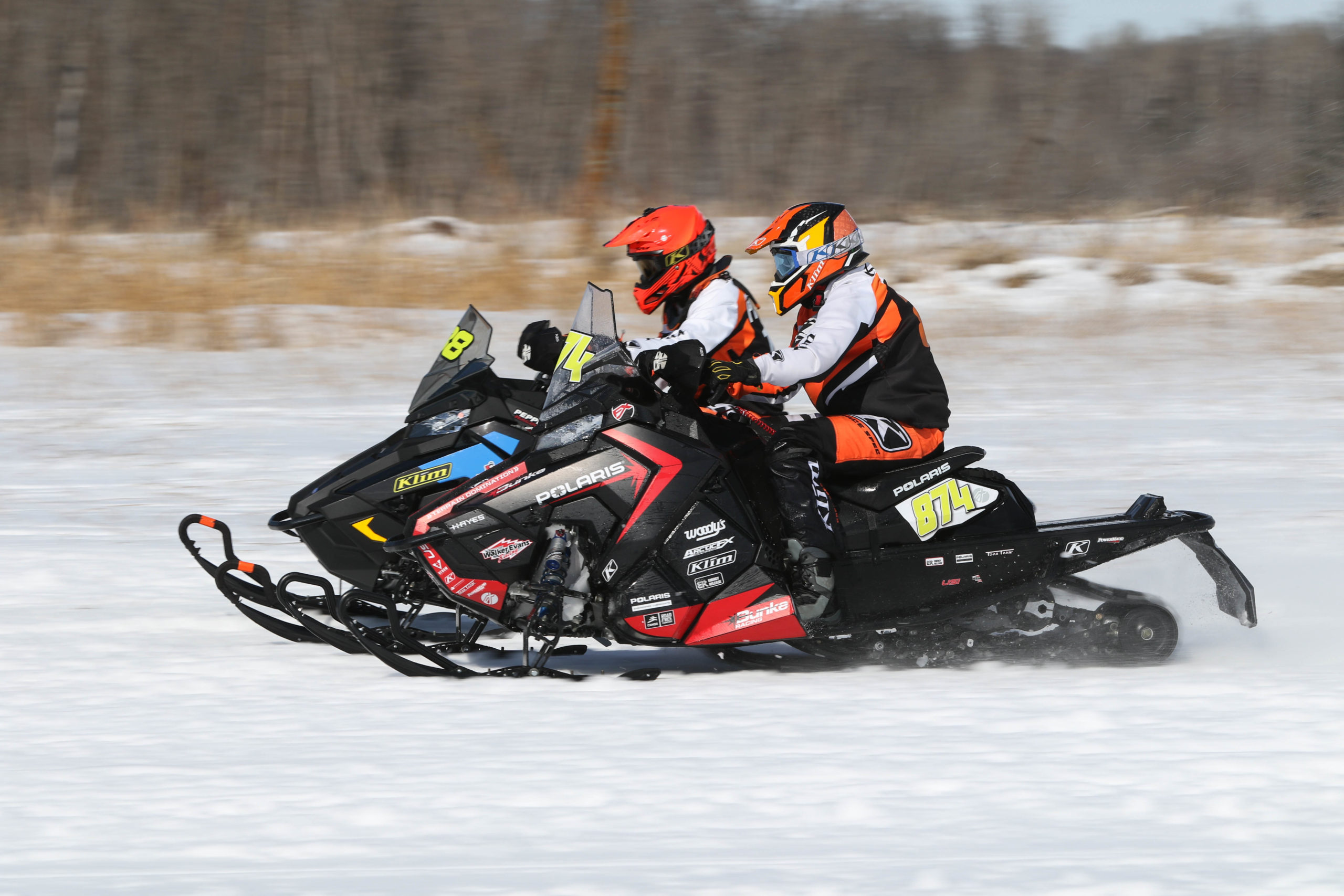 In heat two, the Semi Pro, Sport 600 Improved, and Masters 40 classes had their first day of racing. Gunner Arlaud (Arctic Cat) took the fast time in the Semi Pro class with Paul Brown (Arctic Cat) in second and Dustin Dohrn (Ski-doo) in third. Evan Peppel had the fastest time in the Sport 600 Improved class for day one on his Polaris. In the Masters 40 class, Craig Ritzinger finished on top for day one. 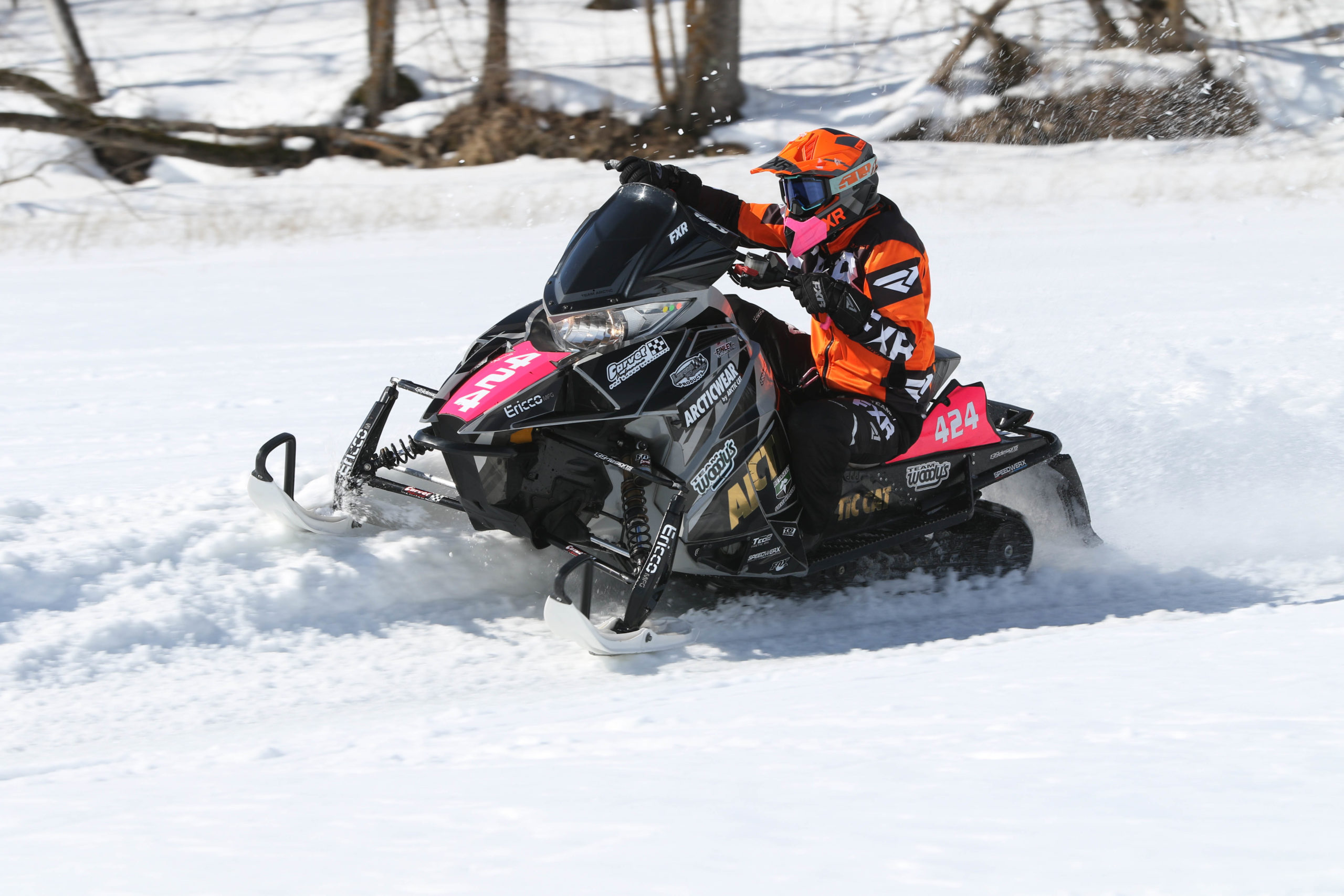 The last race of day one was the heads up Pro Open final running 10 laps. The front row of six consisted of Brown, Selby, Langaas, Lian, Faust, and Tate. Arctic Cat racers Selby and Brown separated themselves from the start of the race. Shortly into the race, sleds started to drop like flies from mechanic’s issues. After lap one, Andy Junglen (Ski-doo) was the first sled to go out. After four laps, Herfindahl broke a drive belt on his Arctic Cat. Chad Lian was running top five when he had to take a DNF. Erdman on his Arctic Cat was another sled not to finish. Andy Wenzlaff (Polaris) had to take a DNF while running 2nd late in the race. Justin Tate (Polaris) also had to take a DNF on the last lap while running third. Arctic Cat rider David Brown crosses the line first making this his first ever Pro win. Wes Selby took second on his Arctic Cat and Travis Faust earned his first podium after taking third on his Polaris. 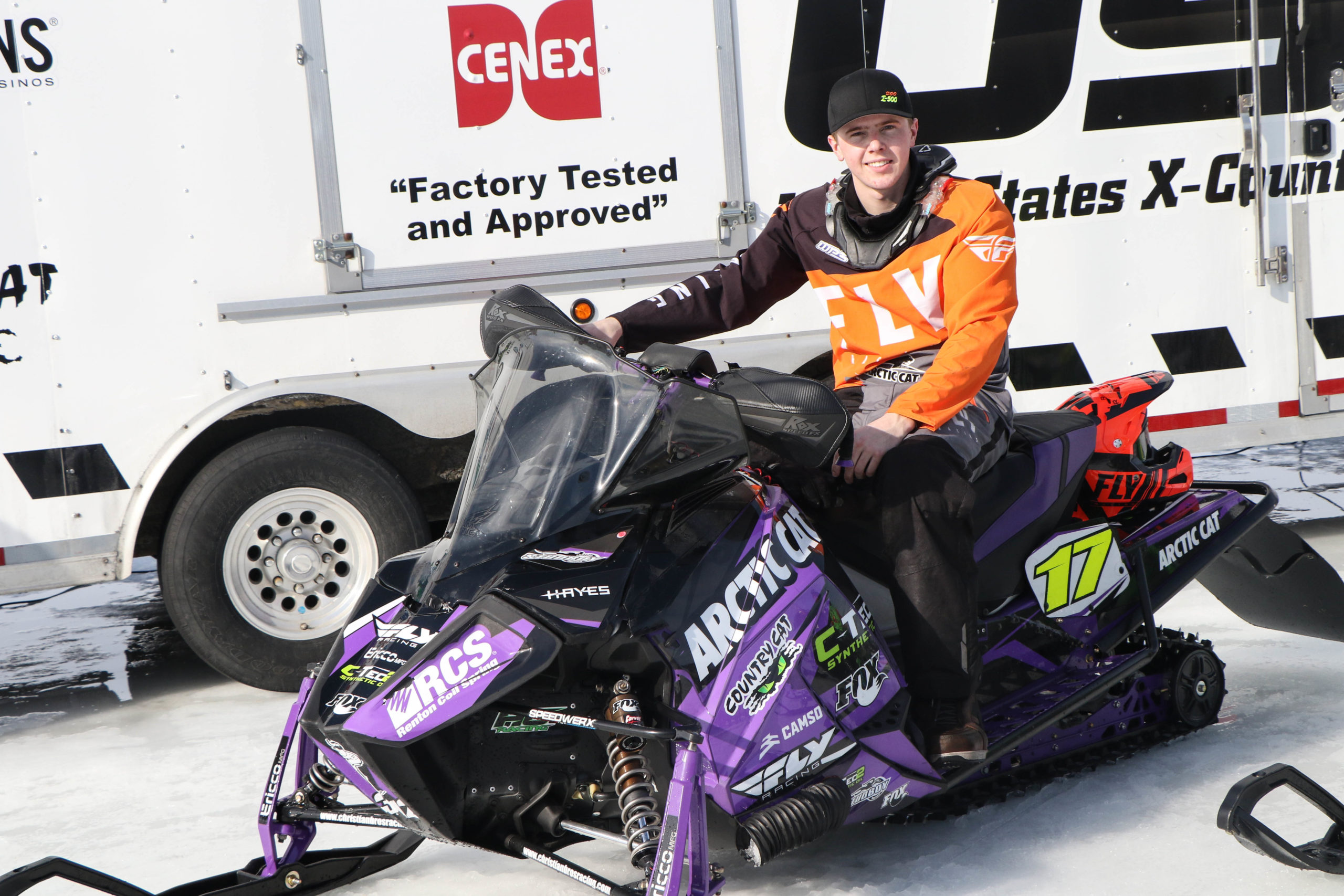 On Sunday, racing action started at 9 AM with the Pro Stock qualifier in preparation for the heads-up Pro Stock final later in the day. Polaris racers Travis Faust and Charlie Revering were the first two sleds to get the green flag. After three laps of racing, Chad Lian continued his speed from Saturday and was the top qualifier for the Pro Stock final. Ross Erdman and Wes Selby rounded out the top three for the qualifier.

In heat two, the Masters 40, Masters 50+, Women’s, and Sport 600 Improved classes competed in their second day of racing. After the two day merge, Craig Ritzinger took the overall win for the weekend in the Masters 40 class on his Ski-doo. In the Masters 50+ class, Mike Carver took the win on his Arctic Cat for the weekend. Evan Peppel took his Polaris to the top of the podium in the Sport 600 Improved class. In the Women’s class, Jill Hetteen showed her speed on the ice. Hetteen got her first win of the season on her Polaris with Alicia Martin (Arctic Cat) in second and Savannah Landrus (Polaris) in third. 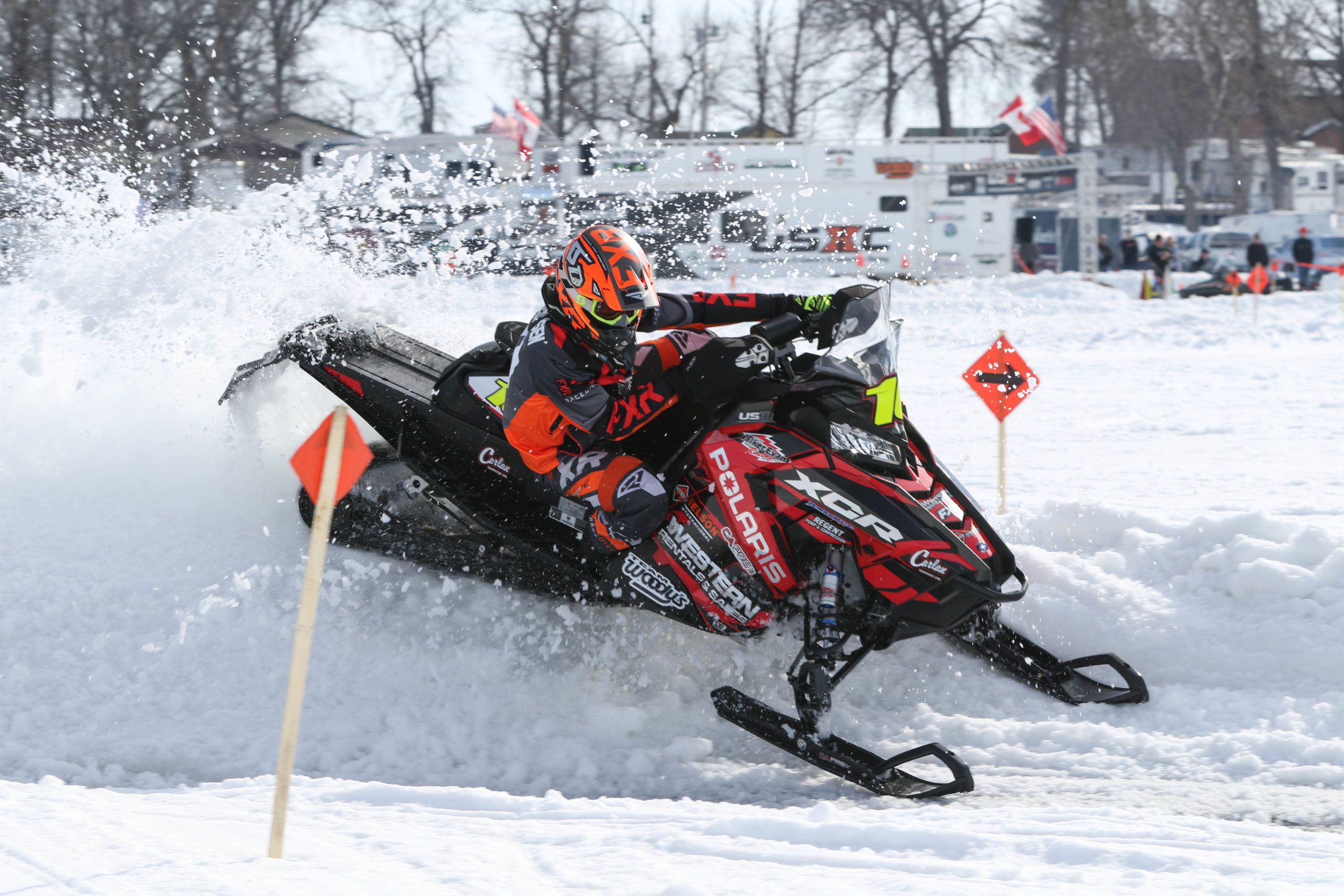 In the fourth race of the day, Semi Pro Improved, Sport 600, and Expert 600 Limited classes finished out their weekend. In the Semi Pro Improved class, Dustin Dohrn continued his success of the season by taking the win on his Ski-doo. In the Sport 600 class, Boe Bunke got another overall win this weekend on his Polaris. Evan Peppel came in second and Cole Boyd in third making it an all Polaris sweep again this weekend with the same sleds as last week. In the Expert 600 Limited class, Braden Sillerud picked up the win on his Arctic Cat. 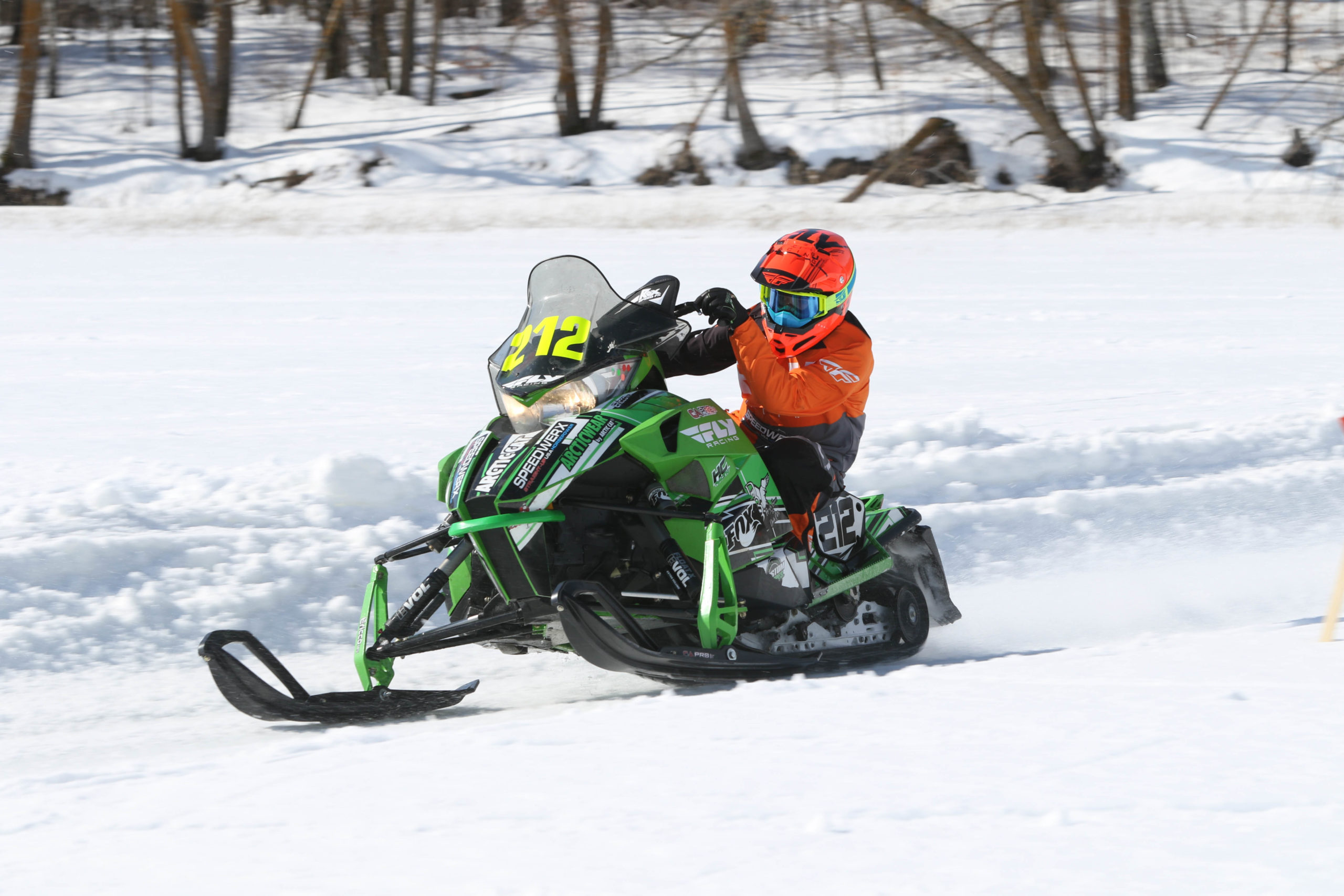 Heat five consisted of the Junior classes battling it out for their second day of racing. In the Junior 14-17 class, Derek Kloety took home his first podium of the season after taking the win in Naytahwaush. Cooper Kangas took second and Aaden Olson took third overall, all on Arctic Cats. In the Junior 10-13 class, Aiden Johnson took the win on his Arctic Cat. Jaxan Hammer came in second on his Polaris and Keegan Houser in third on his Arctic Cat. In the Junior 14-17 Girls class, Mckenna Cloose and Danika Diesen put on another great race. Cloose came out on top this weekend with Diesen in second and Annie Olson in third, all on Arctic Cats. In the Junior 10-13 class, Maia Burnside was the lone entry in her first USXC race. She finished and took the win on her Arctic Cat. 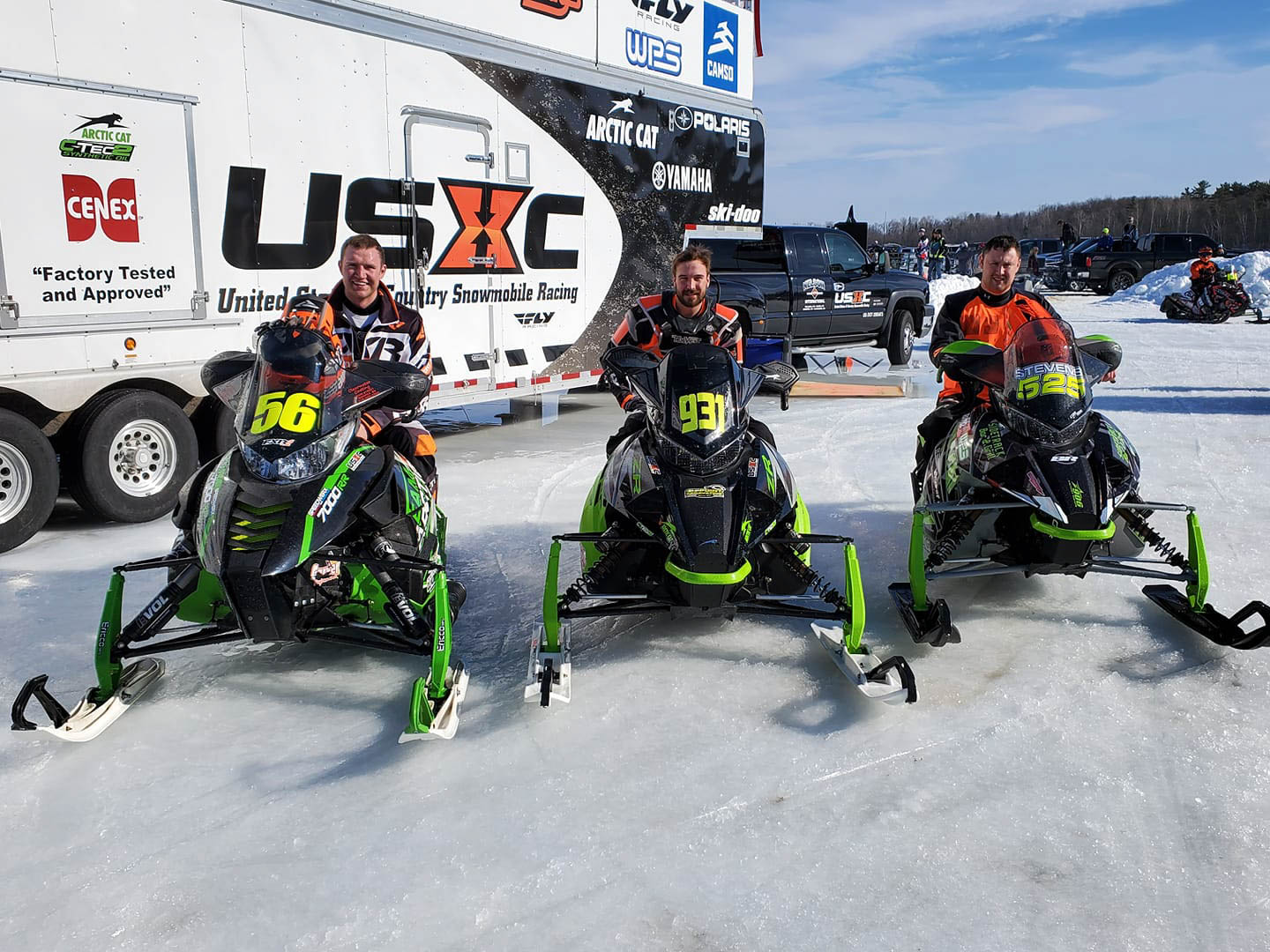 After seven rounds of racing action, Zach Herfindahl is leading the Pro Stock points by four points over Aaron Christensen. Last season, Herfindahl went into the last race of the season by five point over Christensen. Herfindahl ended up winning the points championship last season by one point. Will it be the same outcome this season or will we have a new Champion? Justin Tate is currently sitting third, 22 points behind first.

USXC will have a break before the season finale at Andes Tower Hills in Alexandria on Friday, April 3rd and Saturday, April 4th.