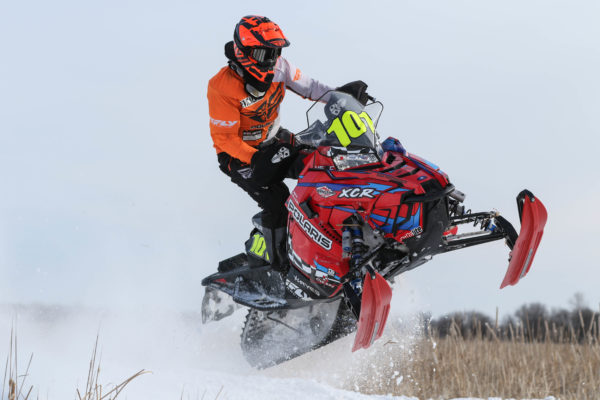 This past weekend (February 29th and March 1st) the USXC series brought riders to the farthest northernmost track on the schedule; Warroad, Minnesota for round six. This course is a favorite for many drivers including last year’s point champion, Zach Herfindahl. Due to lack of snow in the ditches of Warroad, the course was amended to exclude the ditch section that is typically part of the course. Instead of a 27-mile lap, riders were running a 10-mile lap consisting of lake and cattail sections. Most class results were based on a two-day merge of time except for the Pro classes. They had a qualifier at the beginning of each day and a final at the end. 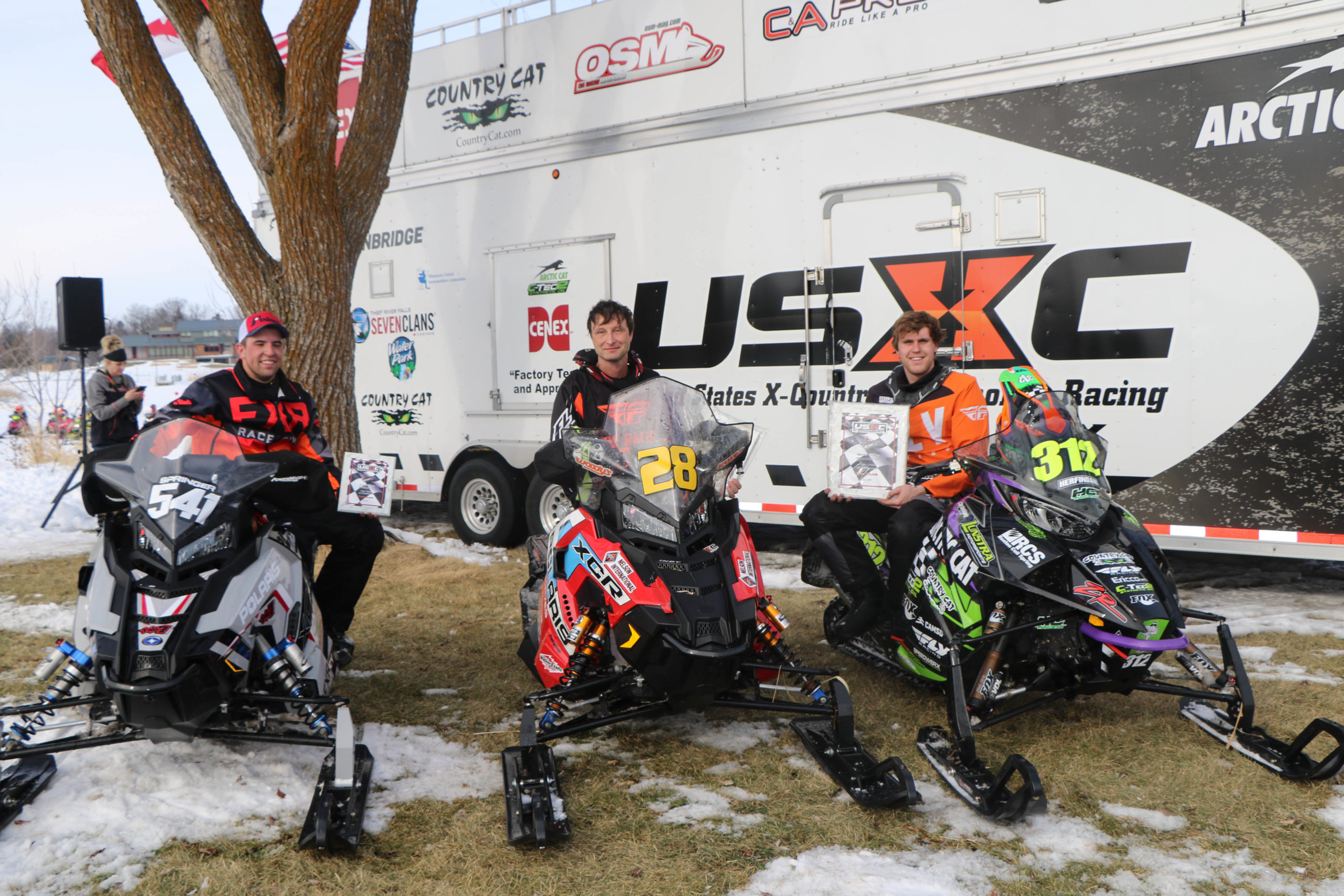 On Saturday the sun didn’t shine at all for the first four heats making visibility tough for racers. Heat one consisted of the Pro Open qualifier, Semi Pro, and Masters 40. Ryan Springer (Polaris) and Dillan Dohrn (Ski-doo) were the first two Pro sleds off the line. These riders competed in four laps equaling around 40 miles. Zach Herfindahl (Arctic Cat) came out on top as the number one qualifier after starting fourth. Justin Tate (Polaris) was second and Ryan Springer (Polaris ) third. For the Semi Pro class, the top time for day one was Dustin Dohrn on his Ski-doo with Paul Brown (Arctic Cat) in second and Andy Junglen (Ski-doo) in third. 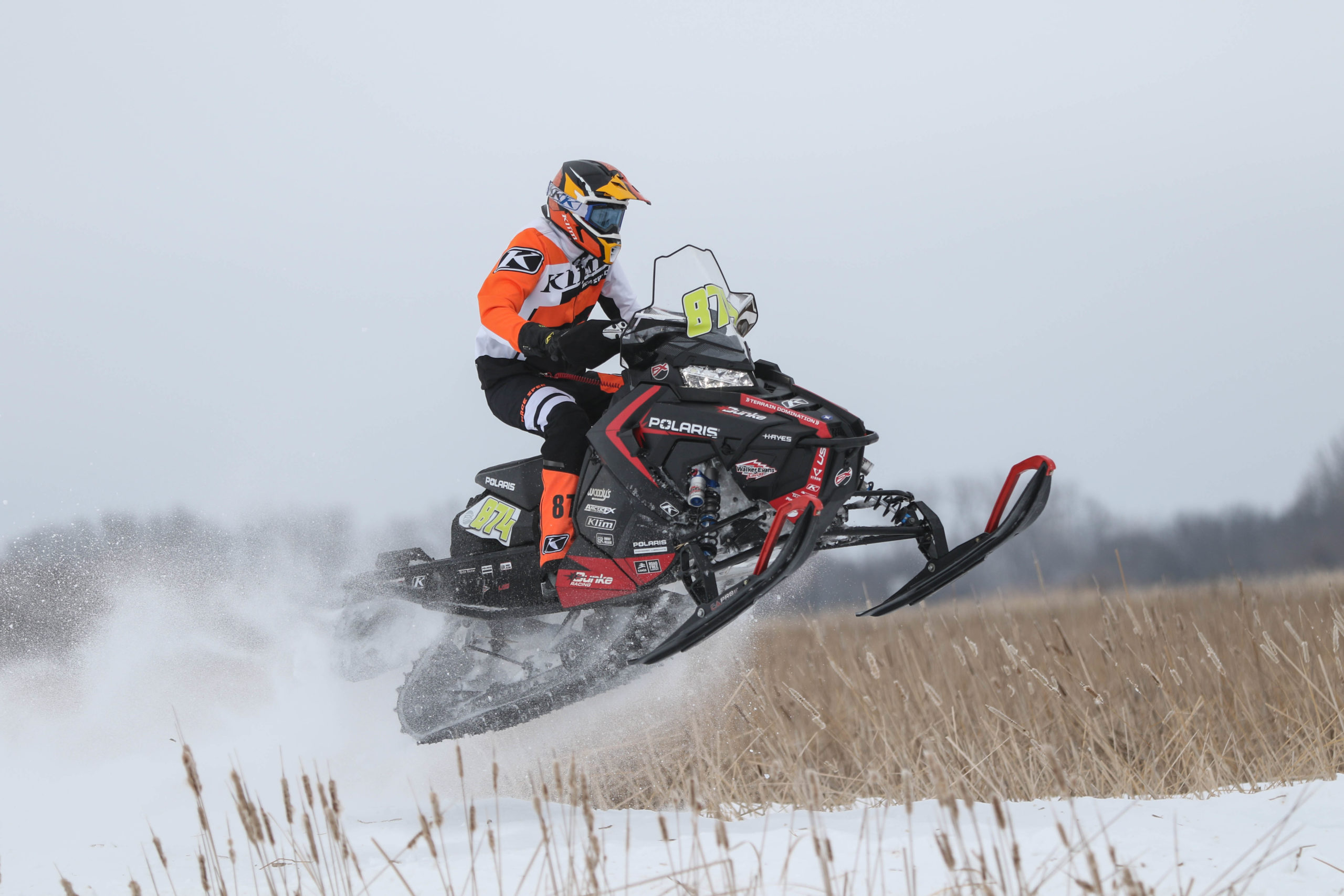 Heat three consisted of Classic IFS, Vintage, and Junior classes. The Classic IFS and Vintage classes both only competed in one day of racing this weekend with Junior riders racing both days. In the Classic IFS class, it was an all Polaris podium. Adam Geisler took the win with Ryan Derrick in second and Kellin Geisler rounding out the podium. In the Classic IFS 50+ class we had a first-time racer take the win; Steven Westad on his Arctic Cat. In the Vintage class, Adam Leubner took the win on his Arctic Cat. For the Junior 14-17 class, Jesse Hallstrom (Arctic Cat) was out front after day one and for the girls McKenna Cloose was leading on her Arctic Cat. In the Junior 10-13 class, Aiden Johnson (Arctic Cat) was leading after one day of racing and for the girls, Unity Gausen was our front on her Polaris.

In heat race four, the Expert 600 Limited, Sport 600, Master 50+, and Semi Pro Improved classes competed in their first day of racing. In the Expert 600 Limited class, Jesse Hallstrom was out front once again after day one. In the Masters 40 class, Jim Sobeck came out on top of day one on his Ski-Doo. In the Semi Pro Improved class, Dustin Dohrn finished day one out front and in the Sport 600 class Boe Bunke had the fastest time.

The last race of the day was the Pro Open final. These racers ran four laps and at this point in the afternoon the sun found its way out from under the clouds. Number one qualifier, Zach Herfindahl (Arctic Cat), was the first sled off the line with Justin Tate (Polaris) and Ryan Springer (Polaris) behind him. Course conditions were rough by the end of the day but that is when we see Herfindahl shine. After four laps, Zach Herfindahl brought his Arctic Cat sled across the line in first with Polaris riders Justin Tate and Ryan Springer rounding out the podium. 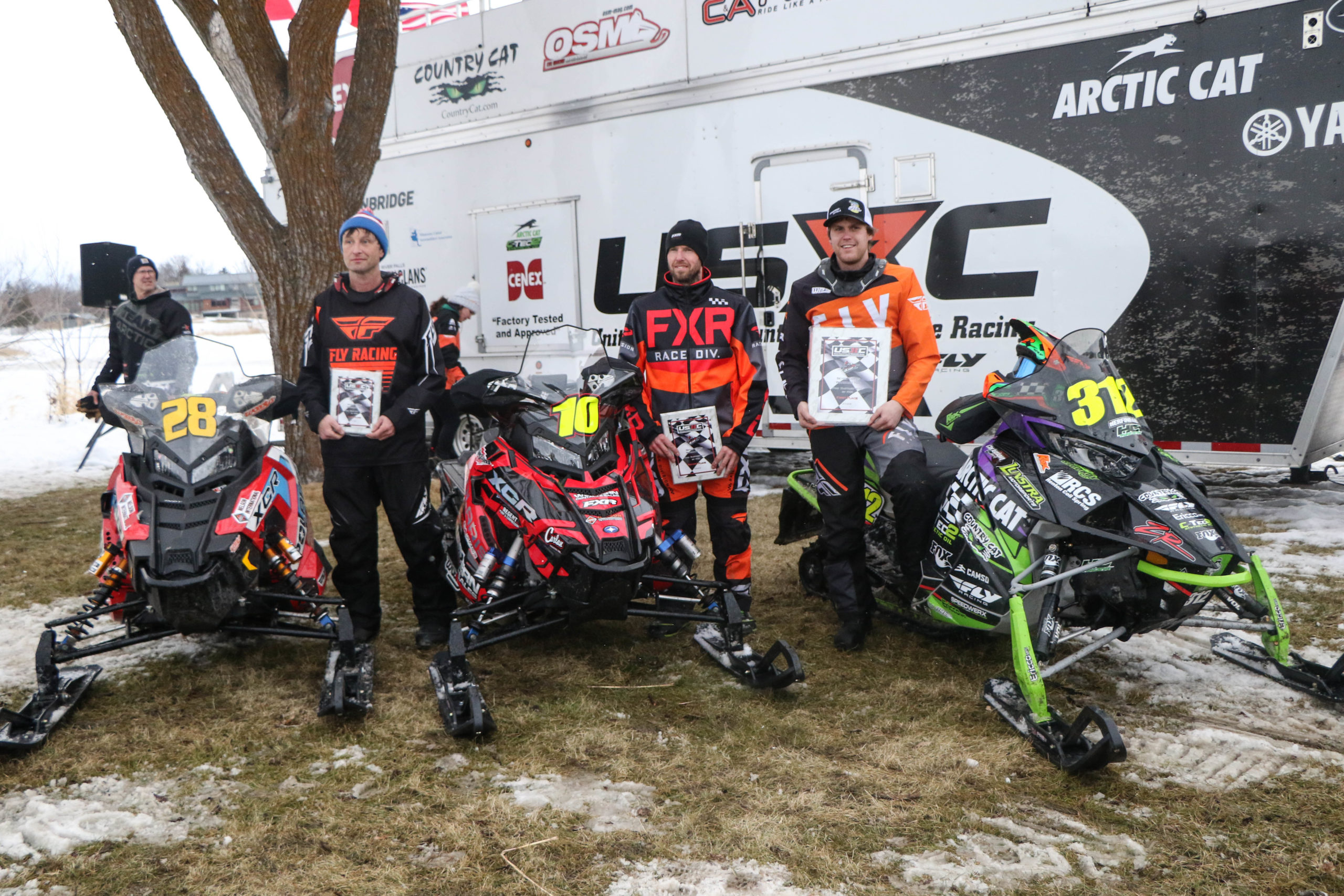 On Sunday, the sun decided to shine unlike on Saturday. This made the visibility issue nonexistent and riders were able to see when they were approaching a hole on the course.

The first race of the day was the Pro Stock qualifier. David Brown (Arctic Cat) and Taylor Bunke (Polaris) were the first two sleds off the line. Shortly after the start of the race, Taylor Bunke was having sled trouble and finished with a DNF which put him to the back automatically for the Pro Stock final. After 40 miles of racing, Zach Herfindahl once again came out as the number one qualifier on his Arctic Cat with Dan Revering having an impressive run finishing second on his Polaris. Third went to Christensen (Polaris), fourth to Tate (Polaris), and fifth to Brown (Arctic Cat). The Semi-Pro and Masters 40 classes were also running their second day of racing in heat one. Paul Brown (Arctic Cat) took his first win in the Semi-Pro class with Dustin Dohrn coming in second on his Ski-doo and Cale Anseeuw in third on his Arctic Cat. In the Masters 40 class, Nick Roehl took the win on his Ski-doo.

In heat race two, the Sport 600 Improved, and Women’s classes competed in their second day of racing. Evan Peppel took the win on his Polaris in the Sport 600 Improved class. Cole Boyd (Polaris) clocked in second and Nicholas Nyquist (Arctic Cat) in third. The Women’s class was a battle all weekend. After Landrus was leading by one second over Sobeck after day one, Sobeck gave it her all to catch Landrus. Lydia Sobeck (Ski-doo) came out on top of the Women’s class by 30 seconds over Savannah Landrus (Polaris). Alicia Martin rounded out the podium on her Arctic Cat. 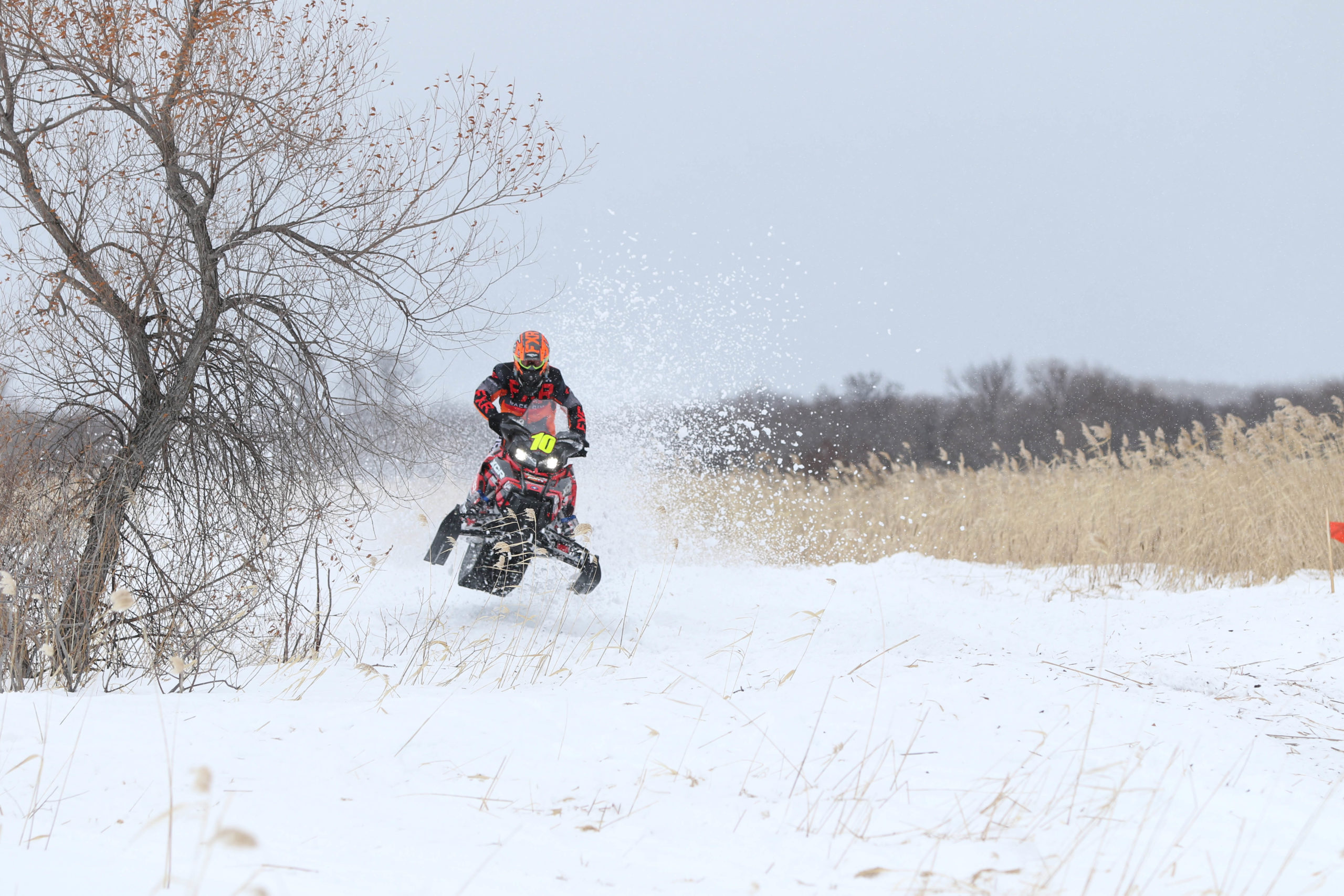 Heat race three was made up of the Semi Pro Improved, Sport 600, and the Masters 50+ class. Paul Brown was victorious on his Arctic Cat with Ski-doo rider Dustin Dohrn in second and Marshall Busse clocking in third on his Polaris. In the Sport 600 class, it was a Polaris sweep. Boe Bunke came out with the win over Cole Boyd and Evan Peppel. Bunke and Peppel are separated by two points in the current season points standings. In the Masters 50+ class, Mike Carver took the win on his Arctic Cat.

The last race of the weekend was the Pro Stock final. Zach Herfindahl and Dan Revering were the first two sleds off the line. Aaron Christensen, Justin Tate, and David Brown were close behind. After one lap of racing, Christensen (Polaris) got around Revering (Polaris) to take second in the running order. After that, riders held their positions on the track and raced their own race. By lap five, Christensen caught up to Herfindahl. It didn’t take Zach long to stretch out his lead again by the next lap. By lap six, Taylor Bunke (Polaris) made his way from the back of the field to fifth place in the running order. On the final lap, Zach Herfindahl’s sled stalled just before the finish line. Everyone around was watching in anticipation wondering if he had enough of a lead to win the race. Luckily for Herfindahl, he got his sled going again and with snapped handlebars and all, took his third consecutive win of the season on his Arctic Cat sled. Coming off a back injury sustained at the I-500 and a week off, Aaron Christensen came home second on his Polaris and Justin Tate, also on Polaris, finished third. 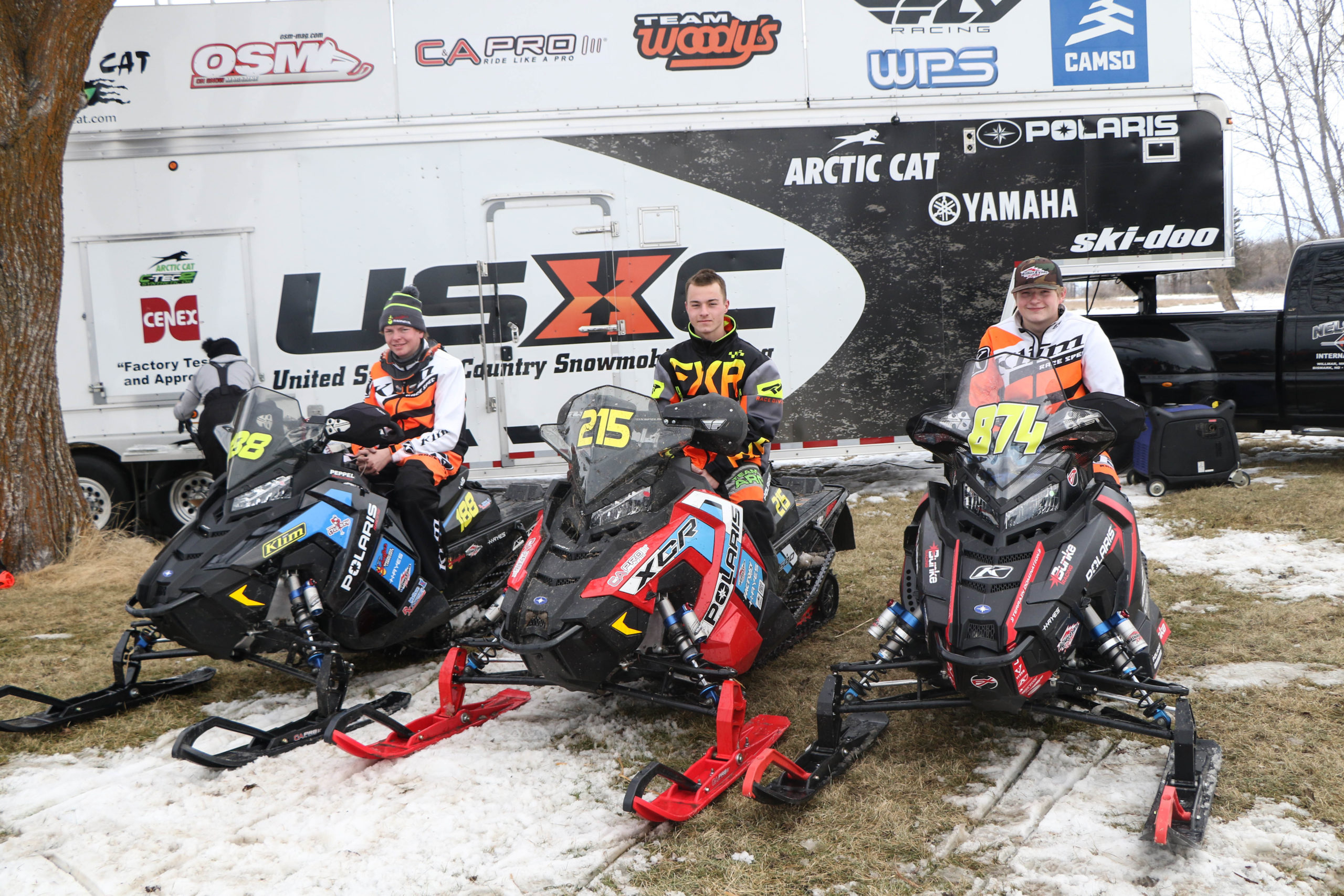 After a win this weekend, Herfindahl took over the Pro Stock points lead with Justin Tate in second and Aaron Christensen sitting in third.