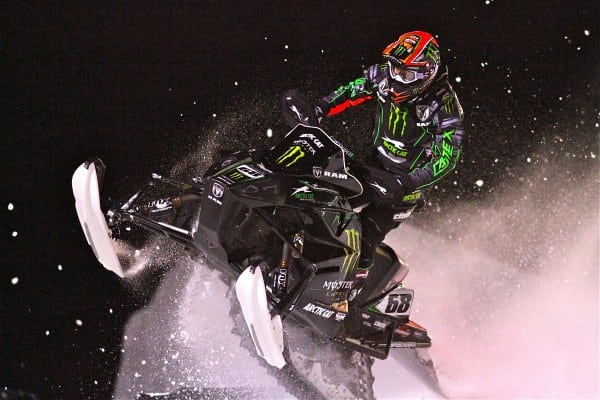 The real test of a motorsports product is its ability to work across a broad spectrum of conditions, tracks and applications. Rounds 3 and 4 of the ISOC National snocross series featured a dramatically different track than Rounds 1 and 2. Lap times at the Duluth National Snocross were in the 22-second range for Pro Open while this past weekend at the Blackjack National lap times were closer to a full minute. At Blackjack, the athletes found themselves on one of the most challenging tracks they will see all season. Built on the slopes of the ski resort, the track featured two uphill runs, two ultra-rough and challenging downhill runs and a tricky dogleg. Bumps, jumps, tight turns and gravity all figured into suspension setup, but, as it seems so often, it was the FOX-equipped machines that rose to the top of the heap.

Calm, cool and collective…and Tucker was feeling pretty good too knowing he had those FOX units perfectly tuned up front.

FOX athlete Tucker Hibbert swept the Pro Open races, taking convincing wins both Friday and Saturday night. He was joined on the podium both days by fellow FOX athletes Tim Tremblay, Ross Martin, Darrin Mees and Robbie Malinoski making it the second event in a row where FOX has swept the Pro Open podiums. In fact, FOX took the Top 6 spots on Friday and the Top 9 spots on Saturday making it clear that if you weren’t using FOX on the brutal Blackjack track you were probably eating the roost of someone who was.

The wins carried on into the Pro Lite class where Jake Scott and Dave Joanis shared the duties for FOX with Joanis taking the top spot on Friday and Scott winning Saturday’s race. Joining Joanis on the box Friday were James Johnstad and Andrew Carlson making it a FOX sweep.

“My sled was working awesome at Bessemer this weekend!” said Tucker Hibbert. “My suspension was dialed in and with my FLOAT X EVOL shocks and I was able to carry tons of speed in the corners while still having the control and stiffness needed for the for the big holes.”

If you spend anytime at all surfing the FOX website, you’ll quickly learn the kids at FOX use a lot of technical jargon and acronyms to talk about their highly touted shocks.  Things like DSC, AVA and EVOL are touted as technical advantages, but what does it all mean? The top riders at Bessemer last weekend relied on FOX shocks to rise to the top, but how did they do it without getting tossed or worse yet, breaking while bombing those deep holes and monster downhill craters referred to as the “Dirty Dozen”?

One FOX ingredient they used is what appears to be at travel size can of deodorant fastened to the bottom side of a FOX Float shock. Called the EVOL chamber, which means “extra volume”, it is best described as an anti-bottoming

This chart illustrates how adjusting the EVOL chamber air pressure only affects the end of the shock’s travel, but leaves the ride zone curve untouched.

mechanism. With air serving as the spring in all FOX Float shocks, the EVOL chamber allows you to adjust the bottom-out resistance of the shock without impacting the ride quality of the primary shock air chamber. In other words, when you have a FOX shock equipped with an EVOL chamber you can adjust your shock to deliver optimum performance for typical trail conditions, and separately adjust the EVOL chamber for those “oh-crap” craters and “G-outs” that can result in the dreaded spine-tingler.

The cool news is, you can now upgrade your FOX FLOAT or FLOAT 2 into an EVOL equipped unit with an affordable upgrade kit. It comes with everything you need including a complete set of decals to let the rest of the riders in your crew know you are running the good stuff. To learn more visit the FOX Upgrade Page and the FOX Technology Page. To make sure the kit is installed right, send your shocks to the crew at the FOX facility in Baxter, Minnesota and have them serviced by the same crew that tunes FOX FLOATS for the top pro riders. Just use the form found HERE. Now that’s service.

FOX Technician Rick Strobel is the “man” when it comes to tuning FOX shocks. A past racer himself, Rick helped tune shocks for Toni Haikonen during his years of dominance and has since set-up and tuned more FOX shocks for more snowmobile racing champions than Taylor Swift has had ex-boyfriends.