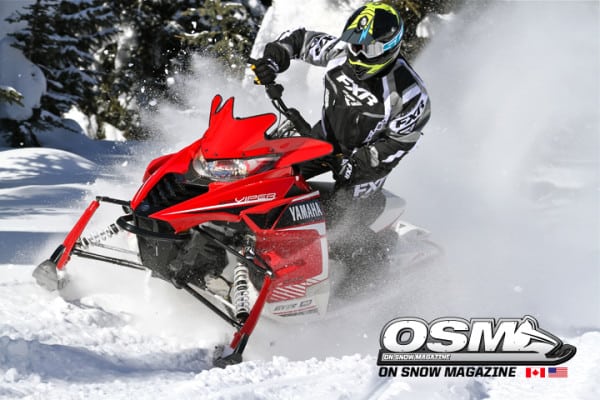 With more new offerings coming courtesy of the Arctic Cat relationship, most notable of which is a markedly improved MTX mountain line; 2016 marks a return of technology coming direct from Japan, with new suspensions, engine technology, and upgraded models.

SingleShot Rear – This year brings proof that Yamaha won’t be content to just sit back and enjoy the rewards the partnership with Arctic Cat has brought them to this point. One such item is the new rear suspension dubbed the SingleShot in 129-inch and 146-inch lengths. The rather conventional looking skidframe replaces the much heavier Mega Float that was found in select Japanese born models. The new suspension is 10-pounds lighter than its predecessor in 129-inch trim (versus the 128 Mega Float) and 9-pounds lighter in the 146 length (versus the 136 Mega Float). The SingleShot is still a single shock design, hence the name, and features a new FOX Float 3 XV shock. The XV stands for Xtra Volume (think of it as a much bigger EVOL chamber). The suspension also touts a traditional front and rear arm, a ratio pull rod, and standard coupling blocks. Our first rip on the new skid was rewarded with much improved ride quality, control, and was less prone to the unexpected harsh bottoming the Mega Float was known for.

YCCT Engine Management System – Another area where Yamaha spent some significant time and resources was under the hood of the Venture and Vector models. The mid-performance 1049cc engine received a host of upgrades including a new crank, pistons, connecting rods and optimization of castings in an effort to improve the already smooth power characteristics of this three-cylinder gem. These changes aside, the biggest news comes in what Yamaha is calling their Chip Controlled Throttle or YCCT. This throttle-by-wire system employs three user controlled operating modes – Entry, Touring and Sport. With a simple push of a gauge-mounted button, the system alters the performance characteristics, from gradual and predictable drive-away and limited top speed in Entry mode, to instant response and performance in the Sport mode. The system offers an ideal solution for rental owners or families looking for one sled that can do it all no matter the rider.

SRV-M Front Suspension – It’s no surprise the biggest news in the Yamaha camp for 2016 comes in the mountain segment where every manufacturer is looking to capture a bigger chunk of the red-hot segment. After finally getting a mountain Viper last season, Yamaha (along with Arctic Cat) tweaked the design for improved deep snow performance. The new front suspension features a more narrowed stance, and compact and narrow spindles that look to reduce drag and keep most front suspension components inside the confines of the cowling. What’s more, the design sheds about 2.4-pounds and incorporates 10-degrees more caster. This increase in caster allows the ski to “turn up” more when turning into the hill while sidehilling thereby making the vehicle hold the line with greater ease and precision. When joined by the new wider and lighter mountain ski, the system offers up greater width adjustability as well, ranging from 34.5-inches to a maximum of 38.5-inches from center-to-center.

FOX Piggy Back Shocks – Here was one most weren’t expecting, especially when air shocks are garnering most of the attention from FOX. These new “traditional” coil-over, high-pressure gas shocks feature a remote reservoir for greater fluid volume and damping capabilities and an easy to adjust, simplified 3-position clicker. While the technology may seem dated to some, we found this shock set-up to deliver the best ride calibration of any set-up we sampled on the early 2016 Yamaha sleds. FOX has been busy with sales calls too, as these same shocks are also found on several Arctic Cat sleds and select Polaris sleds for 2016.

Apex and Vector X-TX 175 LE – Much to our surprise, a pair of Japanese derived models should receive much attention for 2016. Both the Apex and Vector X-TX 1.75 LE models serve up a nice combination of proven goodness and new technology. Both tout the new SingleShot rear suspension; new FOX Float 3 shocks up front and the Float XV at the rear; 1.75-inch Backcountry track; factory installed Performance Damper system; and the YCCT engine management system on the Vector. One of these will be in our fleet for 2016.

SRViper L-TX LE – In our opinion the Viper L-TX LE is the best trail sled in the Yamaha lineup for 2016. Available as a Spring Power Surge only model, the white and red or white and blue buggy comes standard with the Performance Damper kit (making this the first Viper model to receive this voodoo technology); the easy to tune FOX Piggy Back clicker shocks up front and on the rear arm; and standard heated seat and rear storage. We especially dig the throwback white and red version complete with color matched spindles and rails.

SRViper S-TX 146 DX – While not a spring only limited model, we can bet there will be plenty of loyal Yamaha riders who will be giving this big mileage trail cruiser a long hard look this spring. The stretched Viper is designed specifically for long days in the saddle with the storage and fuel range to back it up. Out back, underneath the rear storage lid you’ll find massive space to stash your goodies, plus a rear fuel tank that holds 4.7-gallons. Mated to the front tank, the S-TX 146 DX touts 15-gallons of petro, giving it a range in excess of 200-miles between fill-ups.

SRViper M-TX 141 – Yeah we know the buzz will be surrounding the longer format MTX sleds come next winter, but for us Midwest and points east of the Mississippi riders, the allure of the M-TX 141 has us percolating thoughts of busting brush in places like Michigan and the swamps of Manitoba. The sled still touts the new SRV-M front suspension but in a wider 40-inch stance and features the versatile 2.25-inch Power Claw track. Given Yamaha’s reputation for dependability, this could be the ideal sled to take you to parts unknown off the beaten path and back again.