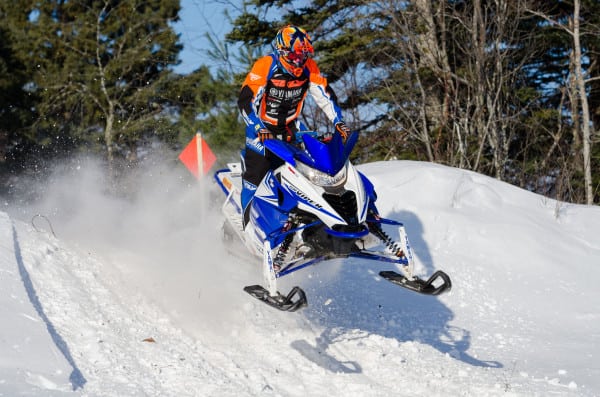 With the national snocross season underway a week prior, it was time for the natural terrain season to commence one week later as COR Powersports kicked off their season in Houghton, Michigan. While most areas east of the Mississippi in the lower 48 are still awaiting snow, the upper peninsula of Michigan was hammered early this season with a week plus of lake effect. While much of the snow fell further to the north, there was enough for the folks at COR to produce the season’s first true terrain course stretching just over 5-miles in length. With the USXC season poised to commence at historic Pine Lake, Yamaha racers used the early season race as a final tune-up. It proved to pay huge dividends at Matt Piche captured the Pro-Stock win. Here’s the official word from Yamaha:

Team Yamaha Rider Matt Piche scored the first Pro Stock win of the Cross Country racing season on his SR Viper race sled at Houghton, MI. “Everyone on the team wanted to come out strong at the first race of the year,” said Yamaha Cross Country Crew Chief Brian Strawsell. “We knew we had a sled that would be competitive and that Matt and Re were ready to race. Everything just worked well for us today.”

The Yamaha Pro squad opened the day with strong results in the Pro Factory 600 class—a second-place finish for Piche with teammate Re Wadena just missing the podium. That afforded the guys an opportunity to assess setups and scout the shortened, sloppy course. “The new Elka shocks worked killer,” Piche said. “I was happy with the way the Viper was set up from our preseason testing.”

With light and course conditions quickly fading, race officials opted to shorten the marquee Pro Stock race. “It was a rough course that was down to mud and rocks in some places,” Strawsell noted. The Viper racers put on a good show, with Piche in front of his next closest competitor by 20 seconds (by jory). Wadena used his years of race experience to smartly bring his Viper in fourth, with a developing driveline issue. “Re knew that it’s more important to score points by finishing a little farther back in the pack than it is to push the envelope and risk a mechanical failure and a DNF.”

Yamaha youth put in a great effort during the day’s middle rounds. New racer, Robby Resch claimed a 4th in Sport Factory Stock and Mitch Sebastian battled to a fourth in Sport Stock. The Team Blue duo finished 1-2 in the Schoolboy 16-24 class to button up a strong day for the up-and-comers. “It was great to see the younger guys step up and do so well,” said Seth Thorson, Sebastian’s head mechanic and race mentor.

No stranger to competition himself, Thorson pulled in a pair of top-10 finishes himself in Semi-Pro Factory 600 and Semi-Pro Stock classes. 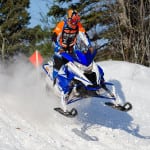 Matt Piche on his way to a Pro Stock win. 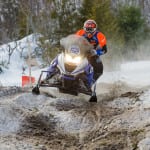 Despite a developing drivetrain issue, Re Wadena coaxed his Viper RTX across the line for a fourth place finish in Pro Stock 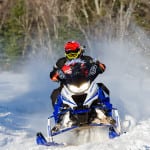