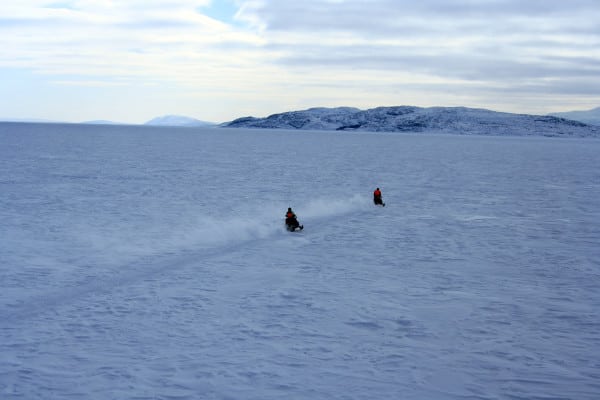 It has been labeled the world’s toughest snowmobile endurance race, and for those that have competed in Cain’s Quest, they unequivocally agree. Racers trek more than 3,300 kilometers across the rugged landscape of Labrador Canada in a point-to-point journey that is one part race and one part survival. The race is completed in just 6-days (or less) as racers compete day and night, enduring frigid temperatures and unknown terrain, guided by GPS and gut instincts. The next “quest” will not commence until 2016, but already event organizers and teams are preparing for this epic battle. The race is expected to attract some of the best riders in the world, as the two-person teams will race for a record $100,000 purse ($50,000 for the winner, $30,000 for second, and $20,000 for third). To encourage early registration and help give one lucky team a significant financial break, event organizers will give away one free registration valued at $6,500. To be eligible, teams must register before March 31, 2015. A news release issued today announced the early bird registration for the 2016 Cain’s Quest Endurance Race. Here’s the official word from event organizers:

Cain’s Quest Inc. today announced that it will start accepting early bird registrations for the 2016 Cain’s Quest Snowmobile Endurance Race on January 5, 2015. Racing teams that register before March 31 will be entered into a draw for one free registration, valued at $6,500 plus HST.

“A break on registration fees will be a significant help to teams, who sometimes spend well over $30,000 to compete,” said Glenn Emberley, chair of Cain’s Quest Inc.

The race kicks off in Labrador West on March 5, 2016 and brings racers, who travel in teams of two, through numerous checkpoints covering central Labrador and both the north and south coasts before heading back to the finish line in Labrador West. Although the exact route and checkpoints have not yet been determined, the route length will be approximately 2,500 kilometres.

“Racers can again expect a grueling race as they navigate through rough, ungroomed terrain while battling extreme temperatures that could dip below -40 degrees Celsius that time of year,” said Glenn.

The prize purse will remain at $100,000, with the teams competing for a first place prize of $50,000. The second place prize is $30,000 and third place is $20,000. Cain’s Quest is the world’s toughest and longest snowmobile endurance race. It is an incredible off-trail riding adventure where teams of two battle in an all-out race through deep snow and thick wooded areas in some of the most remote parts of Labrador. The race is managed by Cain’s Quest Inc., a volunteer-run, non-profit organization.

For more information on Cain’s Quest, including how to register or volunteer, visit www.cainsquest.com. Follow us on Twitter @cainsquest, use #cq2016 or join the conversation on our Cain’s Quest Inc. Facebook page.