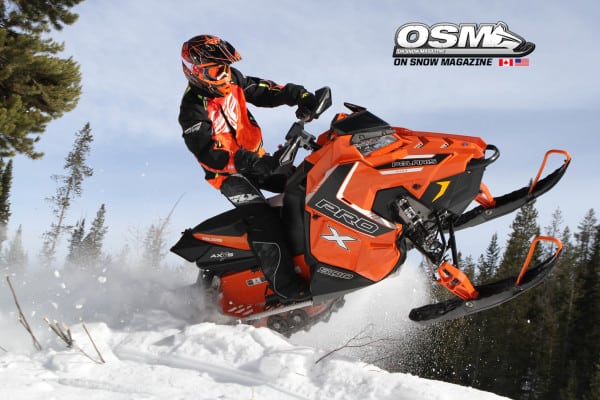 When the Polaris AXYS chassis made its debut in model year 2014 we found most of the offerings in the new chassis made us downright smitten. The new chassis was lighter; the new styling was more complete; the revised suspension design and subsequent castings offered improved ride and handling and looked better too; and the new 800 motor with its lightweight crank was a real ripper.

The short track Rush came in two varieties – the Pro-S, which was tuned for supreme on-trail handling; and the Pro-X, which touted greater front suspension travel; a more aggressive track with taller lugs; and an overall state of tune that was more appropriate for bombing road approaches and tackling insane terrain. It made sense on paper, but after riding both versions back-to-back, most came to the consensus that the Pro-S was simply the better sled for the masses…and it was and still is.

Conversely we felt the Pro-X could have been better. For certain it was a big crater buggy, thanks in large part to its 1.5” taller front shocks and what was described to us as a sway bar that served up reduced torsional rigidity, allowing the front suspension to work more independently from one another. Yet, the 2014 Pro-X lacked the cornering prowess of the lower slung Pro-S as well as the ability to soak-up more “normal” trail bumps and square-edged chop.

Still we wanted to give the Pro-X another chance. After all, the “X” insignia alone had most hardcore trail jockey’s drooling and our egos had a hard time accepting that the biggest, baddest short tracker in the Polaris stable wasn’t for us. We raised our concerns with Polaris this past spring during the new model evaluations and photo rodeo known within the industry as Snow Shoot. Turns out our opinions weren’t that far removed from some Polaris ride technicians and engineers and in fact the Pro-X went back in for some additional ride calibration work prior to final production in model-year 2014…shame on us for not asking sooner.

Thus we needed to get back in the saddle of the Pro-X and we’re glad we did. For certain there remains a distinct difference between the two ride iterations. Clearly the ride height of the Pro-X is taller. This distinction coupled to the more aggressive 1.75” lug track which also serves up greater side-bite has a distinct affect on the cornering capabilities of the Pro-X. The big X does require a more active rider to make the sled hone corners as well as the Pro-S, and that should be expected. But where the revised calibrations really made our eyes open up was in how it handled more traditional trail junk.

The recalibrated Pro-X in 2015 trim was just as compliant as the Pro-S in most situations, and for riders who like to push the envelope, the X was actually better than the Pro-S. We could charge hard into corners and enter oversized braking bumps with confidence. Of course the taller, more aggressive track also delivers greater braking confidence, allowing you to come in hotter and exit quicker…who doesn’t like that?!

The rest of the Pro-X is virtually identical to the Pro-S including the Polaris Interactive Digital Display complete with interactive GPS and Bluetooth connectivity. We’ve said it before, this gauge is the future and we expect not only all Polaris premium models to flaunt this technology in the very near future, but the entire industry will need to adopt similar technologies if they want to keep pace…yes it’s that good.

We admit it…we misjudged the Pro-X in 2014, so much so that we put the big trail bump machine on our long term loaner list for this winter. After experiencing a sled that sacrifices little on the trail and allows us to hit the local snocross track for open track days or make blind bombing runs down rutted out ditchlines we couldn’t help ourselves.

The Rush Pro-X is at home in big terrain, where standing-up and hitting off-camber holes is the norm versus the exception.

The other key difference of the Pro-X is the more aggressive, snocross inspired Backcountry X 1.75” lug track. This track shreds the snow pack and offers superior traction in both acceleration and deceleration compared to the 1.25” Ripsaw II found on the Pro-S model.

A key difference between a Pro-S and the above photo of the Pro-X is the 1.5-inches of additional shock travel that can be seen above the coil-over spring