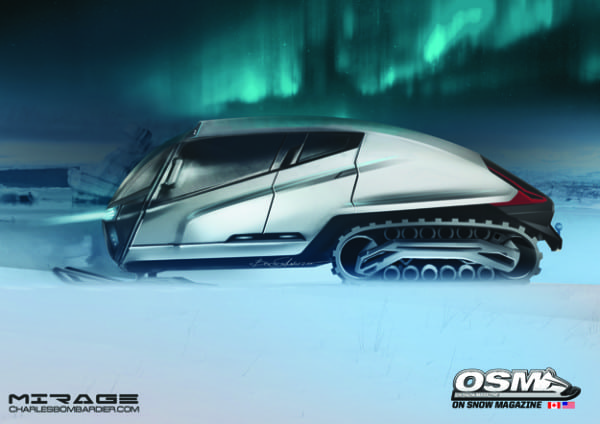 Charles Bombardier and his team of designers have dreamt up a new take on the fully enclosed over the snow vehicle. Inspired by the 1940 Bombardier B7 (the B was for Bombardier and 7 represented the number of passengers the vehicle could hold), one of the first snowmobiles ever designed and produced by Joseph-Armand Bombardier, the Mirage appears on the snow swirled horizon like a futuristic dream.

In the 1970s, Ski-Doo’s Research and Development center built two advanced snowmobile prototypes under the project name Mirage. The vehicle had no relationship to the like named and more traditional Moto-Ski Mirage snowmobile. Instead the R&D developed Mirage was a fully enclosed snowmobile equipped with a steering wheel, four seats and sharp geometric forms (as Charles puts it) similar to exotic cars of the time.

The Mirage concept shown here is a hybrid blending of the original Bombardier B7 snow vehicle and those two Mirage skunk works vehicles from the 1970s.

More than just an elegant design, Charles and his team gave additional thought to the “guts” of this machine. Built upon an aluminum frame, it’s designed to be powered by a 240-horesepower, Volkswagen Touareg Turbo Diesel engine. Known for its durability, power and torque, the turbo diesel would allow the fitment of tracks at the front of the vehicle as well as the back, giving the Mirage the ability to become a true workhorse.

The Mirage shown here however has skis affixed to the front, and an “oversized” 150-amp alternator would deliver enough power to the electrical system to employ the use of an electric

Configured to carry up to six people in a 3+3 design, the internal layout could also be changed to

garner more room for cargo. According to Charles, his team of designers developed several iterations with varying track and ski options, including an extended track version for additional flotation.

Large windows on all sides of the vehicle deliver a wide field of vision and an electric powered sunroof incorporates a modern automotive feel to the vehicle. The overall look was inspired from art deco and automotive design cues from the 1950s.

The Mirage concepts shown here were designed by Boris Schwarzer.

About Charles Bombardier – The grandson of Joseph-Armand Bombardier, Charles has a wealth of experience in the design and engineering of vehicles during his time at BRP including the Can-Am Traxter, the second generation Ski-Doo Elite and the Can-Am Spyder Roadster. In 2008 Bombardier founded a private Research and Development Center and developed electric urban transporters and electric ATV prototypes.

With a passion for innovation, Charles is deeply involved within the design community and acts as an expert and a consultant to support inventors, companies and basically anyone interested in new applications for mechanical engineering. His website www.charlesbombardier.com promotes open innovation and along with a team of designers they are constantly dreaming, innovating, and creating new concepts and publishing them for all to see.

As Charles puts it, “Our mission is to inspire kids, students, inventors and tinkerers to improve existing modes of transportation and imagine what the future holds for us. We share our concepts with the world so they can grow faster, evolve and become a reality one day.”