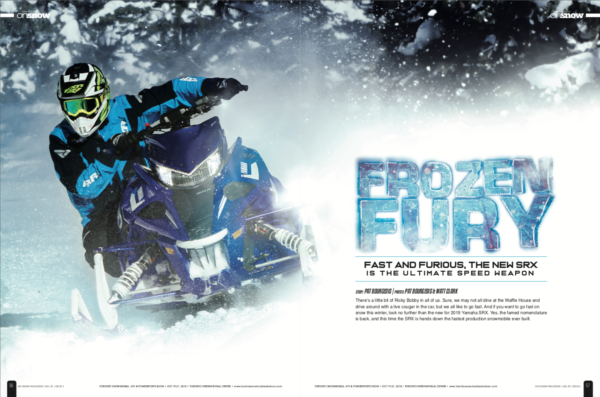 There’s a little bit of Ricky Bobby in all of us. Sure, we may not all dine at the Waffle House and drive around with a live cougar in the car, but we all like to go fast. And if you want to go fast on snow this winter, look no further than the new for 2019 Yamaha SRX. Yes, the famed nomenclature is back, and this time the SRX is hands down the fastest production snowmobile ever built.

Obviously we know the SRX is not entirely new. In fact, the 2019 model is more of an exercise in naming and marketing than fresh engineering. The mind-numbing Genesis 998 turbo has graced the snow for the past two winters, and has single-handedly breathed new life into the hyper-sled category. The SRX has rekindled memories of brutally fast, and often finicky triple-triple two-strokes from the 90s, and at the same time will assuredly introduce instant triple-digit speeds to a new generation of riders.

To bring back the SRX name is a perfectly executed move by Yamaha’s marketing team. The famed nomenclature has a storied past for the company, which recently celebrated 50-years of snowmobile production. The original SRX, which stood for Snowmobile Racer Experimental, made its debut in 1976 and was an instant race track success. The first production Yamaha with liquid-cooling, both the 340 and 440 versions were lighting quick, and dare we say, still dang sexy. The SRX name resurfaced again in 1998, this time accompanying Yamaha’s answer to the burgeoning triple-cylinder muscle sled category sweeping the industry. Technology reigned supreme with the sophisticated three-cylinder two-stroke, and it’s still considered one of the most potent snowmobile engines ever produced. For 2019, the SRX name is back once again, and it has never been faster. 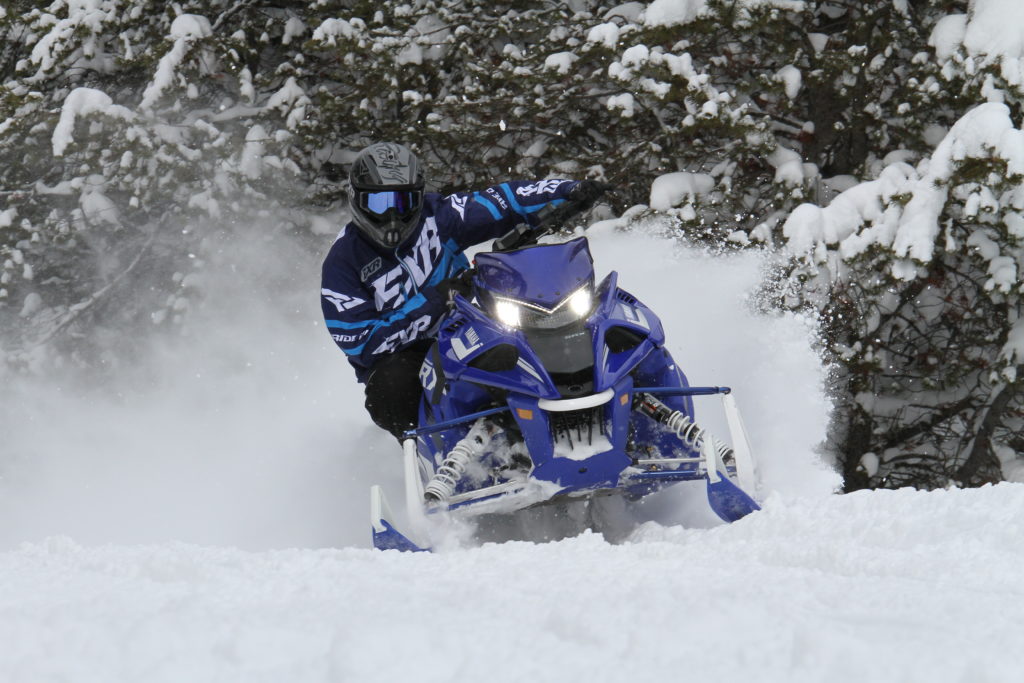 To look beyond the Yamaha racing blue hued hood of the SRX is a glimpse into what is arguably the most advanced snowmobile engine ever developed. From the purpose-built engine structure that includes optimized and treated connecting rods, forged pistons, oil-jet piston coolers, and a robust crank and case, all designed to take the punishment of power that has since been documented beyond 200, via third party dynamometers.

While we could ramble on for paragraphs about the technology that controls this beast, words simply can do no justice for an engine that is nothing short of a work of art. The brains of the operation is a 9-sensor Mitsubishi ECU that constantly monitors all aspects of the 998, and then automatically adjusts ignition timing, fuel delivery  manifold air-pressure, and turbo boost pressure so as to always deliver maximum power with maximum reliability.

After two full seasons on snow, and nary a report of failure to our knowledge, the 998 turbo is as durable as it is powerful. The OSM crews have had a pair of turbo units both seasons, and aside from a being a wee bit stubborn in extreme cold-start situations, the engine has been as reliable as taxes and death. 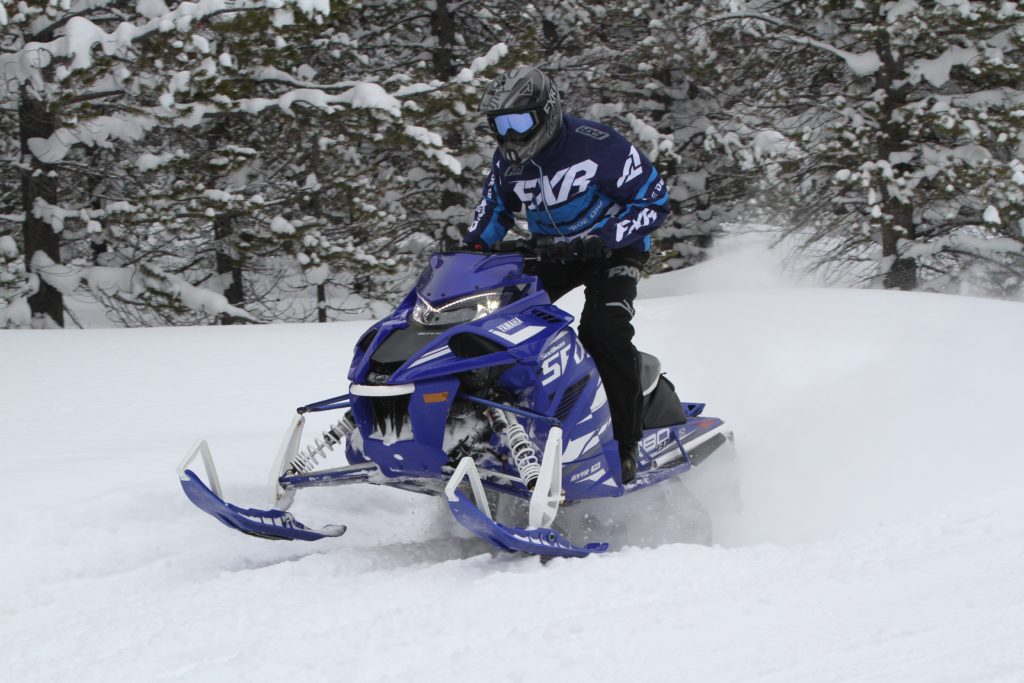 Up to now, everything you’ve read is yesterday’s news. All iterations of the 2017 and 2018 Sidewinder models have employed the same high-tech goodness of the aforementioned 998 Turbo. And to put it bluntly, the Sidewinder is fast…stupid fast. Last winter, it was not unusual to record a top speed of 117mph on our 50th Anniversary Sidewinder LTX. Find a straight stretch, squeeze the throttle and listen to exhaust whoosh hasten. In two quick breathes you’ll find yourself eclipsing the hundo mark with relative ease. But what if that’s not fast enough? What if you need more? Enter the SRX.

The 2019 SRX is an exercise in speed through and through, and Yamaha and Arctic Cat engineers applied old-school tricks to the most high-tech sled on snow to find even more. It starts with the track, where a 1-inch Ripsaw 1, fully-clipped version replaces the now rather traditional 1.25” track found on most modern trail sleds. The “smaller track” and full-clipped design means reduced rotating mass and less friction, which in turn means more speed.

They then went to an even older page in the speed playbook, and lowered the ride height of the sled. Through new dual rate front and shock springs, center skid spring, and new torsion springs, the sled sits lower and is more balanced than the Sidewinder. The “sucked down” SRX results in less air going under the sled and disrupting the aerodynamics. Perhaps more importantly, it reduces the approach angle from driver to skidframe. This means the track rolls with less resistance, and you know what that means…yup, more speed.

Lower isn’t just faster, we found the new stance to be better handling, and better looking in our opinion. We were also surprised at how well the SRX continued to absorb bumps and trail chatter. In fact, we could nary tell the difference in ride quality between the SRX and a Sidewinder. The improved balance and spring rates that are softer initially, but ramp-up to the same final force at the end of stroke, has allowed Yamaha engineers to attain more speed and improve the handling without sacrificing comfort. Even in big trail chop, we never experienced harsh bottoming. 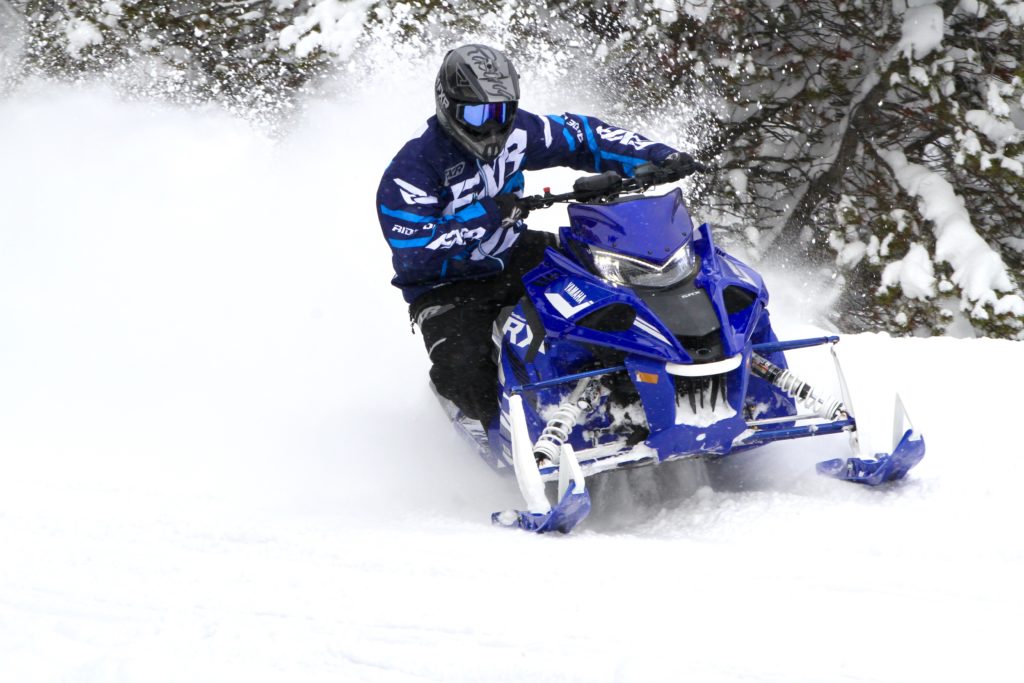 Perhaps the most impressive aspect of the SRX, and all Sidewinder models for that matter, is how controllable something so fast can be. Unlike the hyper sleds of old, the SRX can be driven, as happy running 40mph on a twisted trail as it is turning a frozen lake into a blur, something the hyper sleds from the 90s could never accomplish.

To add further refinement to the mix for 2019 is a new handlebar and control layout that can be found on nearly every model from Yamaha and Arctic Cat. The new controls feature a redesigned throttle that touts improved ergonomics and reduced throw, making it more comfortable on long rides, especially for those who have smaller hands. Other new features include left-block switches and a stand-alone kill switch that can be rotated down to avoid accidental contact, and a new Hayes brake reservoir with contoured brake lever that is both closer to the bar and easier to manipulate with one or two fingers.

Obviously speed and ligament stretching acceleration is the coveted attribute of the modern SRX, but we were shocked to discover the sled was something much more during our time spent in the saddle this past spring. The combination of shallow lug track, lowered ride height, and instant ability to break traction made the SRX in many ways, more trail friendly than similar Sidewinder models. Enter the corner hot, tap the brake to set and kick-out the back of the sled, approach the apex, and then hammer down for a power sliding exit that is simply too grin worthy to ignore. 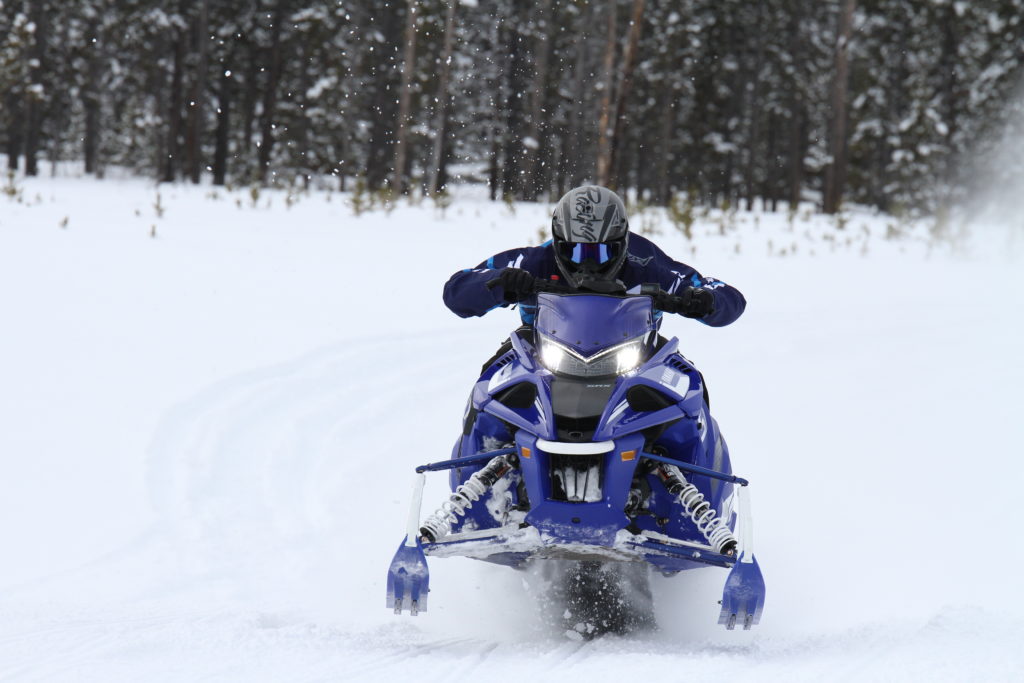 There’s also something happening here in terms of wanted and unwanted traction. With taller lugs and more aggressive tracks becoming the norm, few will argue the benefits of additional traction when it comes to acceleration and control. But there are also unwanted attributes of having this additional grip. A track with extra lug will often “bite” into the bumps instead of “washing” over the tops. This force is then fed into the suspension which must manage the movement. Because of this, we found the SRX to actually deliver a more compliant ride in moderate to light trail chop. Instead of feeding the force of each bump into the suspension, the Ripsaw 1 track would more often than not, slide across the face of the bump.

Coming into the 2019 season, we were fairly certain another Sidewinder would be in our stable. We deemed the SRX would be too one dimensional for our varied riding needs. Turns out we were wrong. After three days of flogging the SRX, we happily placed our order for the third coming of the Snowmobile Racer Experimental…after all, who doesn’t like to go fast?! 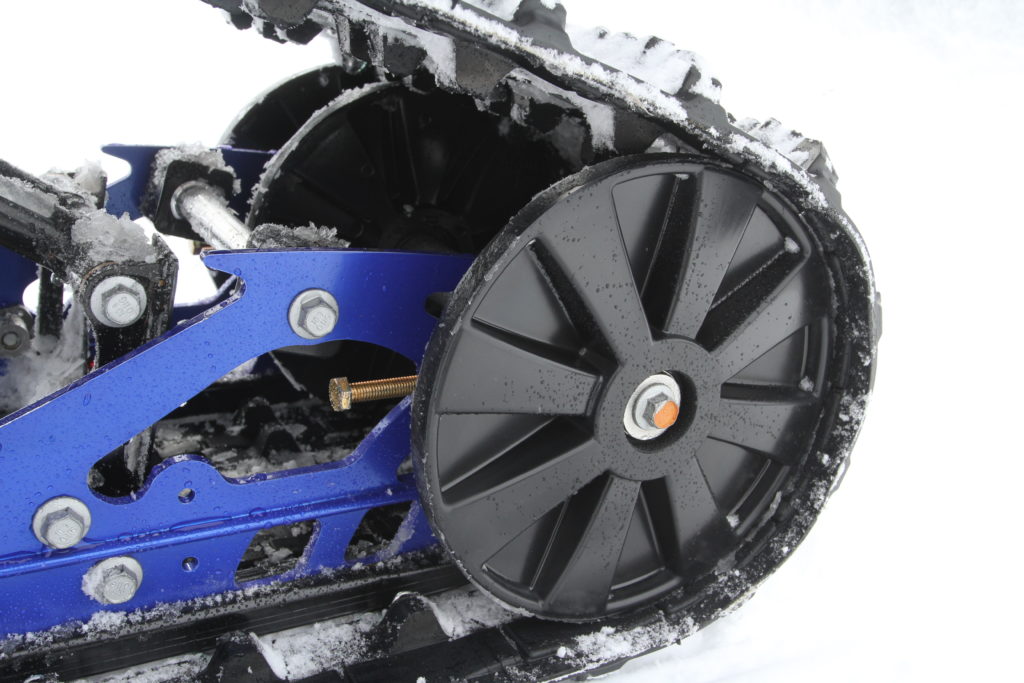 Oversize 8-inch rear axle wheels are part of a revised design that features a triple idler system that is lighter, stronger, and reduces rolling resistance for more speed. 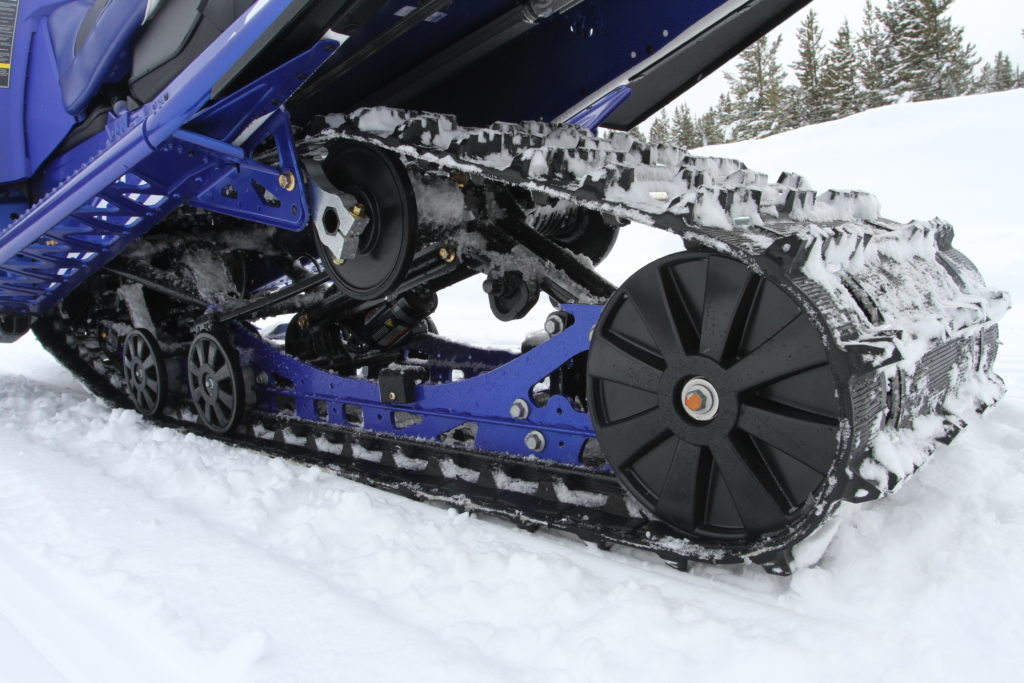 The ride height of the SRX has been lowered primarily by increasing the overall vehicle sag or “ride-in”. Softer initial rate springs lets the SRX sit-down in its haunches, but bottoming is still kept in check, thanks to a final spring rate that is the same as previous Sidewinders, along with revised shock valving. 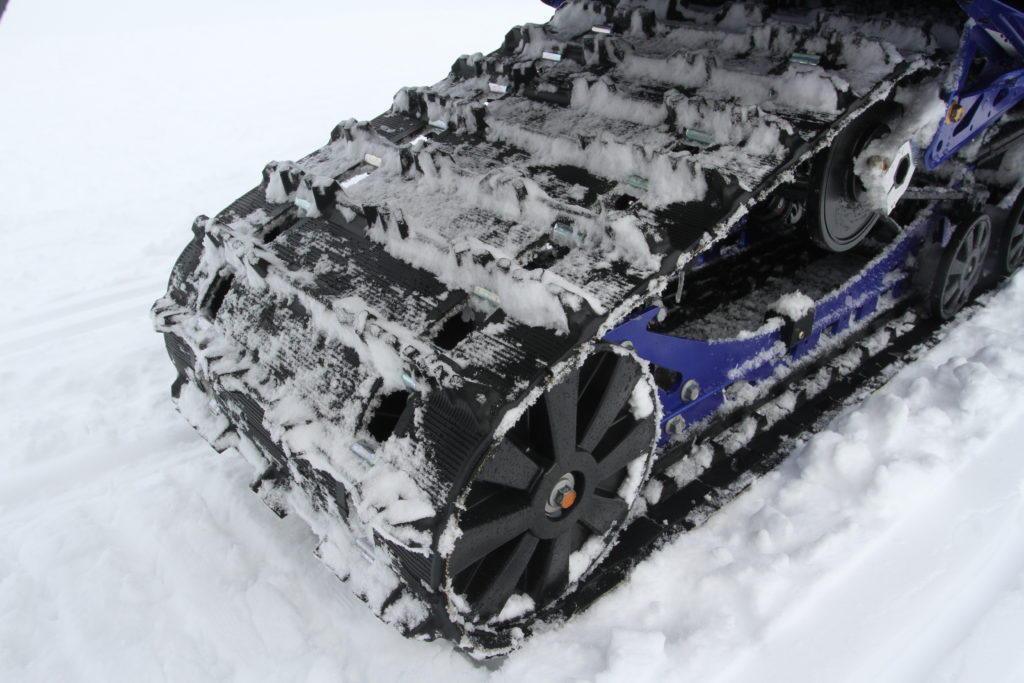 There’s magic happening here and it’s not just the added speed you can attain from the “shallow” lug Ripsaw 1. We were perhaps more impressed with the fun spirited ride quality the one-incher delivered. The ability to manipulate the rear of the sled from side to side added a fun factor often missing from big lug tracked machines. 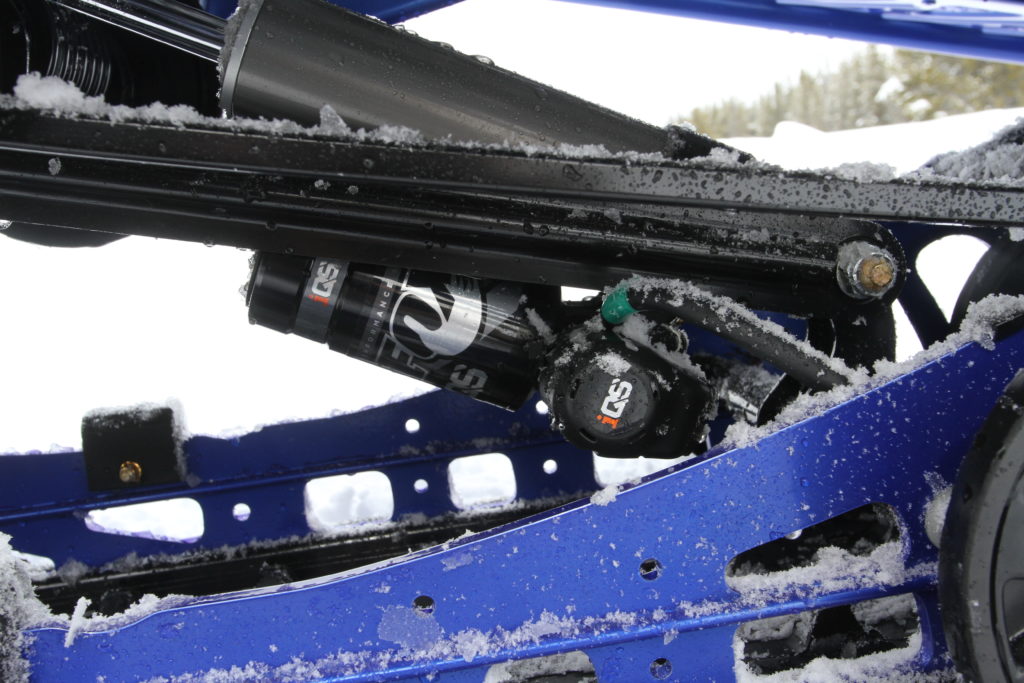 With all this talk of speed, we nearly forgot to talk about the intelligent suspension feature also found on the SRX. The new FOX Intelligent Quick Switch (IQS) system is the next evolution of the quick change technology found on QS3 shocks, employed on many models in recent years. The IQS system now gives you this adjustability with a push of a button from the saddle while on the fly. You can select from soft, medium and firm pre-determined shock damping profiles, and the system can make the change in tenths-of-a-second. This means you can firm up instantly for a jump, and then return to trail tuned softness without ever lifting or taking your eyes off the trail.

This frontal comparison of a Sidewinder and SRX shows the lowered ride height of the speed buggy. You can also pick out the dual rate springs, which gives the SRX the added ride-in attributes, yet still retains firm rates in the “ride zone”. 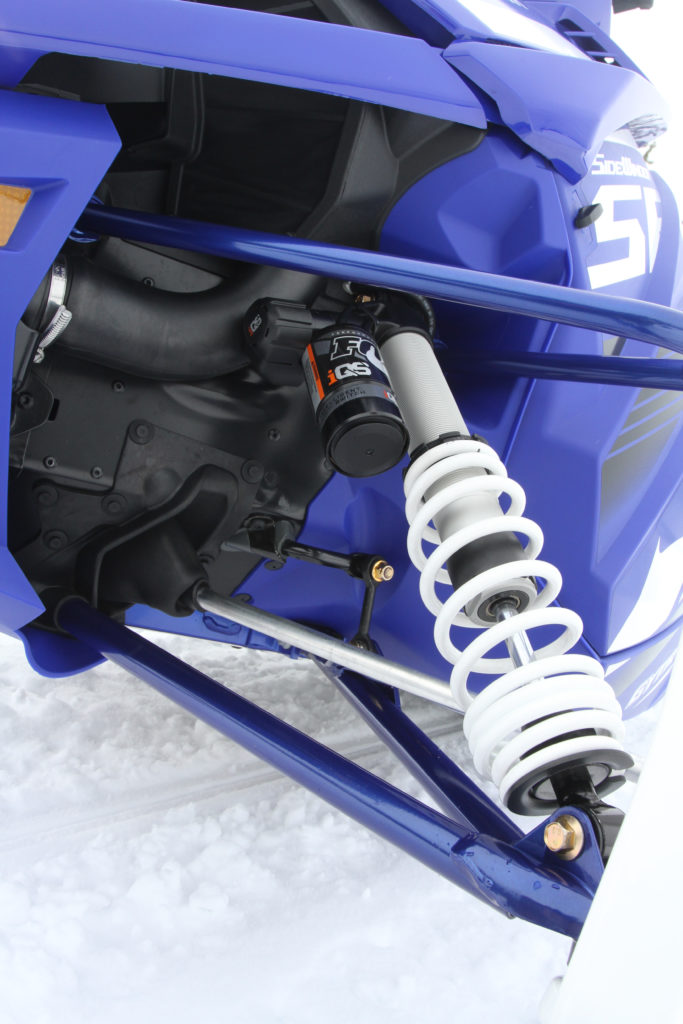 The shocks from the IQS system look very similar to QS3 versions; the primary difference is an insulated wire leading to a compact servo motor, residing where the knob is found on the manual adjust Quick Switch units. 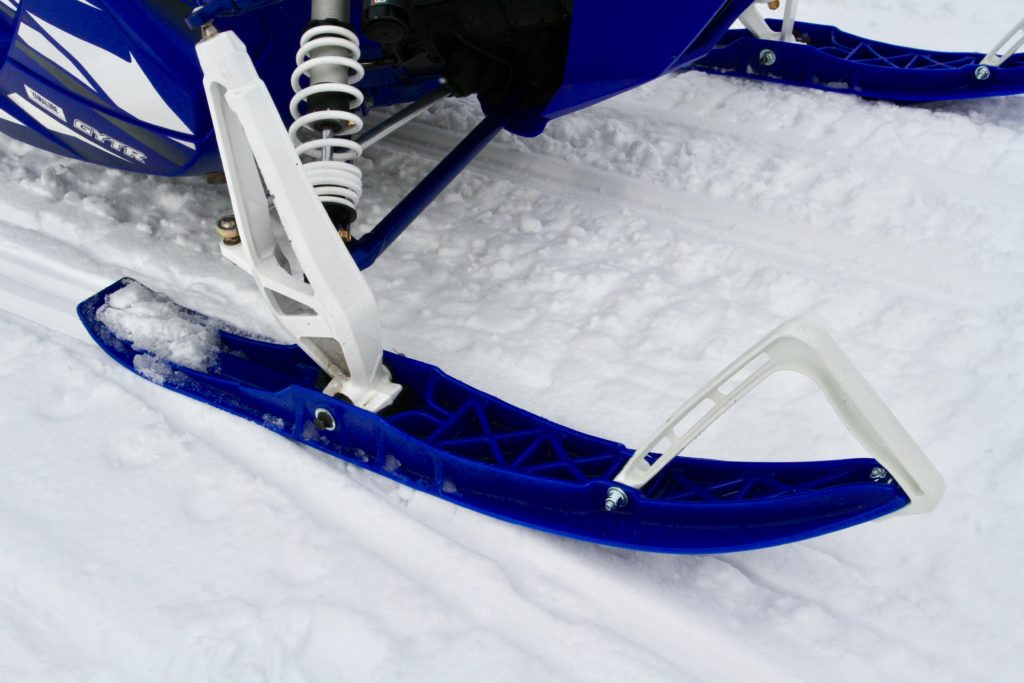 Yamaha continues to outfit their Arctic Cat manufactured sleds with their dual-runner Tuner III skis. For certain these runners produce laser-straight tracking and nary a hint of hunting or darting. Yet those positive attributes are quickly overshadowed by vague handling with a heavy “push” in the corners when speed increases. 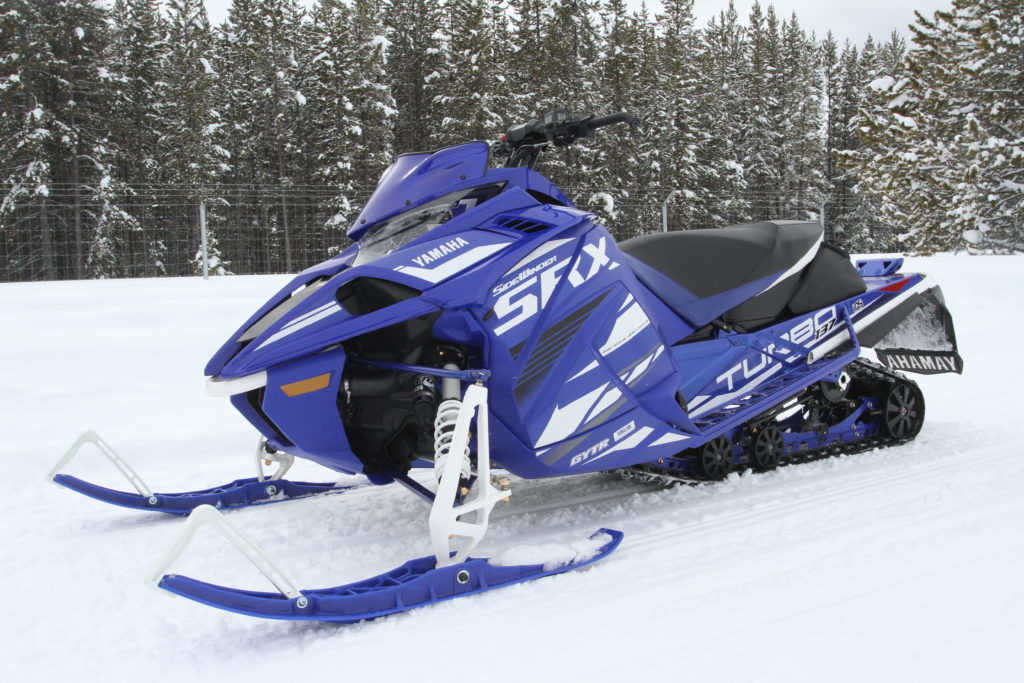 The newest iteration of the SRX touts throwback graphics to its 1998 brethren, but that’s where the similarities stop. The newest version is faster; smoother; better handling; quieter; and more comfortable by a wide margin. 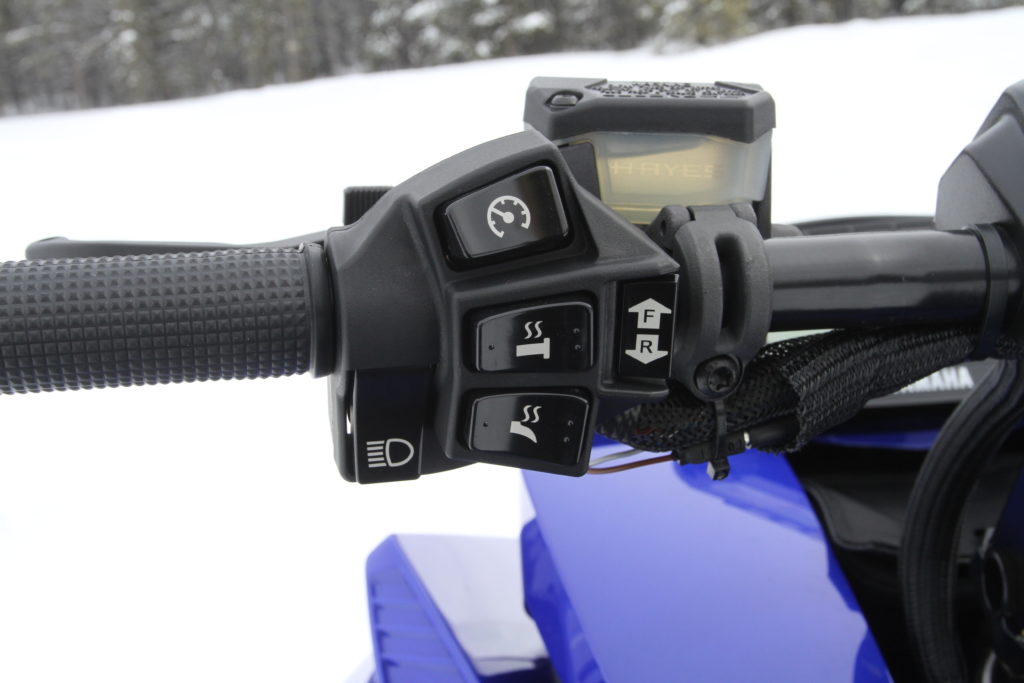 New controls were a much needed update for the Cat build Yamaha sleds. The top button with the analog gauge icon is used to activate and control the IQS shock technology. Along with dash gauge indication, you can leave the suspension feature active, so you can make quick changes at any time throughout your ride. 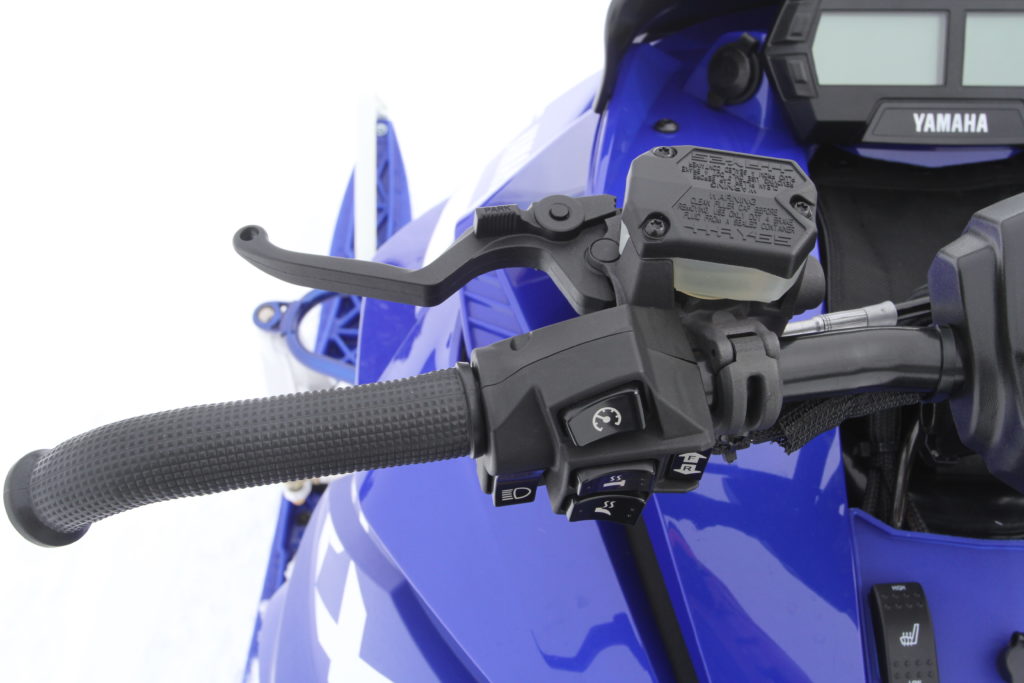 A new Hayes master cylinder has been mated with a short throw brake lever that offers greatly improved ergonomics over the previous design. While easily within one-finger reach, brake response, feel, and effort remains heavy and vague. 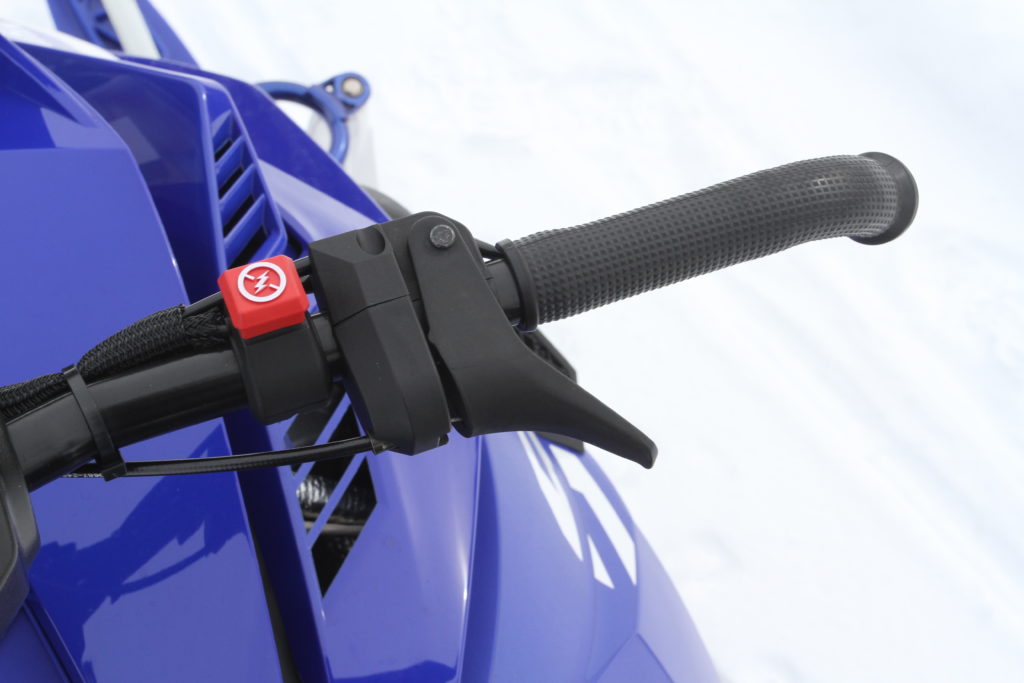 Your girlfriend tells us you have small hands. While we can’t help, the SRX can, at least when it comes to getting a more comfortable grip on the throttle. The improved shape, proximity to the bar, and shorter throw combine for dramatically improved throttle control. 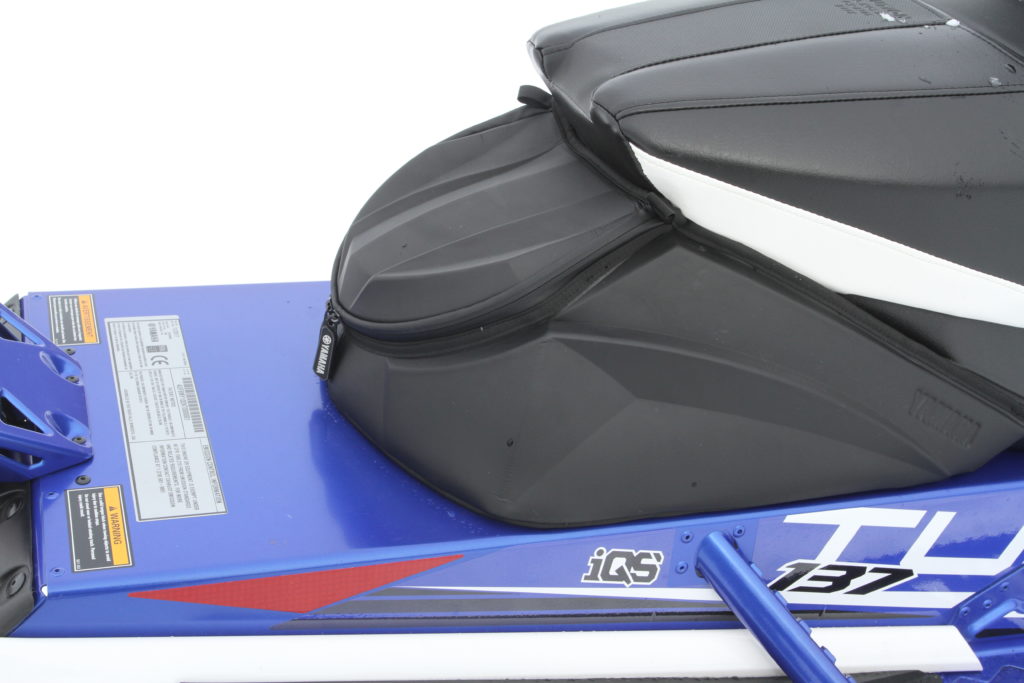 Since you’ll be traveling at warp speed for much of the winter, the Yamaha crew developed a new rear trunk bag that is bigger and more stylish. Perfect for storing that extra testosterone you’ll be carting around. 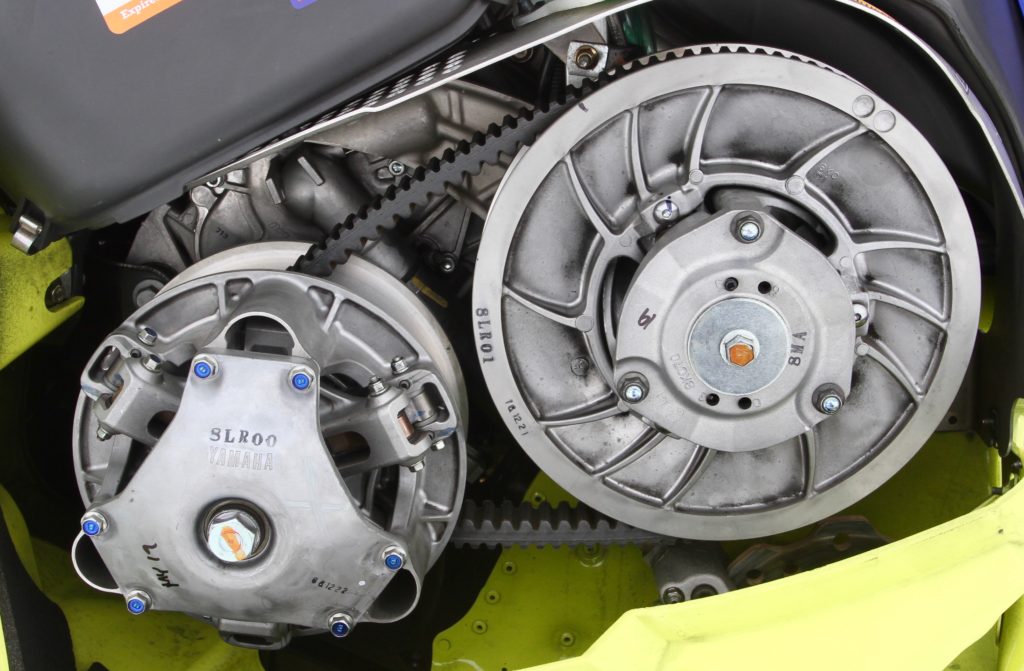 When the Sidewinder was introduced, the force-inducted power was harnessed by a new YSRC roller secondary and upsized primary. The more robust design allows the SRX to “shift into overdrive” for, yup you guessed it, added speed. However, the big power and abundant under-hood heat have made belt life an issue for some. We’ve seen belts give up the ghost anywhere from 500-miles to just over 1,000-miles when power is applied in moderation.