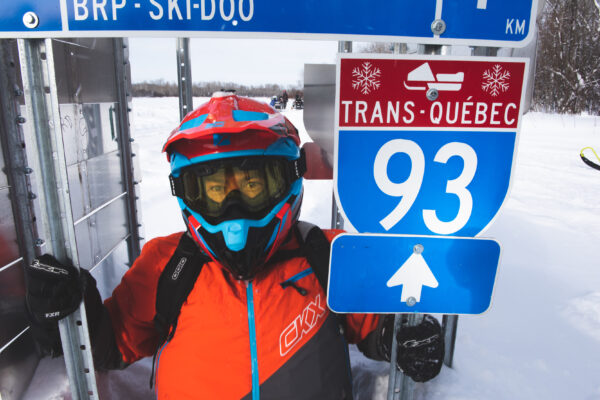 In January 2019, the crew of OSM/STV and I loaded up at our global headquarters in Willow Beach Ontario, in 2 new Ford F150’s with trailers to head to Abitibi-Temiscamingue Quebec. We featured this ride and a fuel milage test between the 2 Ford trucks we had on episode number 9 of our 2019 season. If you are close to computer, you can check it out right now on YouTube. 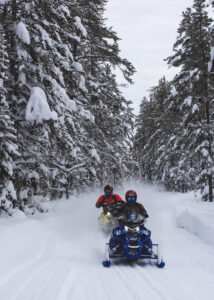 If you’ve seen the video before, or just taken the time to watch it now, my challenge with this article will be to deliver more of the story. However, I believe we covered the experience pretty good in the show. So good! Was the theme of the ride, and if you don’t get anymore out of the video, or this article just remember that statement. So good. These two words are the most accurate way I can describe the Abitibi area and the trails.

To recap the adventure, we arrived in Rouyn-Noranda, on a chilly evening the day before our ride was to begin. -33 degrees Celsius, was showing on the trucks thermometer, which was confirmed when we stepped out of the trucks at the hotel and began loading our gear in. I like the cold, but anything below minus 30 it starts to take the fun out of being outside! 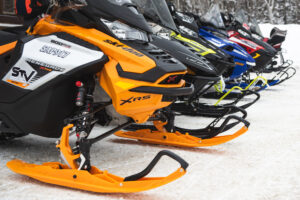 The big bump capabilities of the ski-doo xrs were not needed. Perfect would be the one word I would use to describe these trails

The next morning when we first got up, temperatures were still below this minus 30 threshold, but it warmed up to a balmy -28 when we were finally ready to start the sleds. Which after a little bit love they all did, and the trucks too. I admit, at that point I wasn’t looking forward to a day on the trails with the crispy temperatures.

I would have been so wrong to turn around and head back to the warmth of the hotel room, because while wearing every bit of cold weather gear I brought with me, immediately riding out of town I was met with snowmobile trail perfection. So good! What started right away as we rode out of town was a rhythm to a trail system that allowed our group to fall into a comfortable pace where the terrain and performance of the sleds clicked. Flowing down the trail, we were treated to a mix of terrains, woods, open areas, and elevation changes. The one common denominator as the kilometres passed under the sleds was that the trail was made of glass. 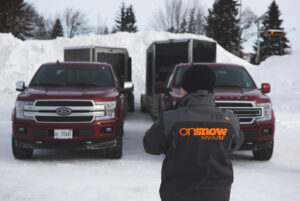 I really thought starting these 2 trucks in the morning at -32 was going to be an issue. No problem for these Fords, even the diesel started right up!

Our destination for the day was Motel Villa Mon Repos, in the town of La Sarre, which wasn’t that far from Rouyn-Noranda. Total distance traveled for the day was right in the neighbourhood of 140 kilometres. I know it doesn’t sound like much but with shooting video for television and acquiring the stills photography for the mag, we have to keep our daily distances in check if we want to actually get anywhere. However, with the conditions of the entire system in Abitibi–West, you can greatly expand your daily dose of riding, easily doubling our distance. Definitely.

Arriving in La Sarre, around 7pm, darkness had already descended (I have to stop with these “D” words) which meant our shoot day was over, but none of us wanted to end the ride day. Dropping the bags off in the room, we made an immediate U-turn, to burn in another 40k or so in the dark. We couldn’t resist, it was so good! 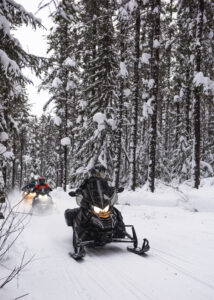 Day 2 of our ride pointed the ski tips towards Amos, which would be another 140 kilometre day with the route we took and the back and forth riding we do for photography. However, just like the day before the trails were absolutely perfect, perhaps even better then our first! The temperature warmed up a little bit, and we seemed to move into a region with a bit more fresh snow. The loaded trees, straining under the weight of all the powder made for a stunning day, as we continued to flow with the trails.

As good as the trails were, excellent signage was also a key element for us as we navigated though the system. This was the first time for me ever riding trails in this region, and the accuracy of the signs along with their frequency, always kept me aware of where I was, and where I was going. Knowing you are on the right trail and knowing how far away you are from towns and services we were headed to allowed me concentrate on enjoying the ride. 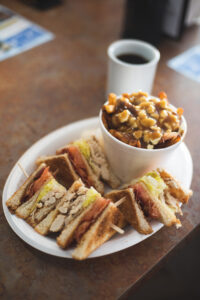 A club sandwich and poutine make for an excellent lunch. Tasty, and this lunch will stick with ya for big distance afternoons.

In addition to the physical markers on the trail, Abitibi–Temiscamingue, has also invested heavily in a phone application that drills down into an accurately marked and scaled online map, but also pinpoints the many services you’ll find along your adventure. They even have pictures included with the points of interest to give you more peace of mind to know you are in the right location.

Arriving in Amos, for the second night of our saddlebag tour, we knew there’d be no after ride ride because we were all pretty tired. Instead we settled into the Amosphere, Complexe Hotelier, and had dinner at the restaurant which is part of the hotel. Having a great meal in slippers after an outstanding day on the trail is my favourite way to end a day, so it was nice to be able to eat in the same building where you simply walk back to your room for the night. 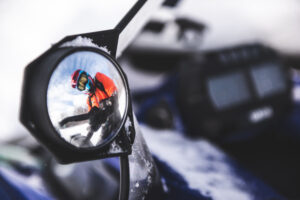 Did you know you can look behind you with a mirror? The are required for riding in Quebec on FMCQ trails!

Day 3 was our final day on the trails which meant we were on the way back to Rouyn–Noranda and the Quality Inn, which would be roughly a 150 kilometre day. Day 3 was also more of the same on trails that were just… so good! I had heard from a bunch of friends that this area was one of the best area to ride in and they weren’t lying at all. Throughout this trip, we were treated to absolutely perfect conditions, that lived up to their reputation! 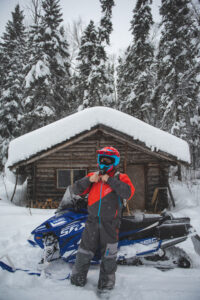 My happy place! Loads of snow and boost, made this trip one of the best ever!

Getting back to Rouyn–Noranda, reflecting back about this trip with our riding group at the Cage au Sport restaurant (in my slippers because it’s attached to the hotel) talk was all about how we only scratched the surface of the riding opportunities here in Abitibi–West. Our total distance travelled was right around 500 kilometres for the whole trip, but I think that number could easily double or triple if we didn’t have the media responsibilities. I would have done almost anything to spend an extra couple days just riding and enjoying being a snowmobiler in an area and on trails that are just, so good. 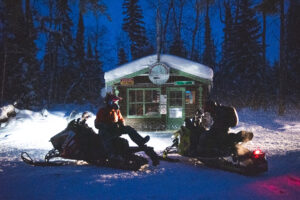