ALL CHARGED UP FOR SNOW – ELECTRIC SNOWMOBILES ARE COMING 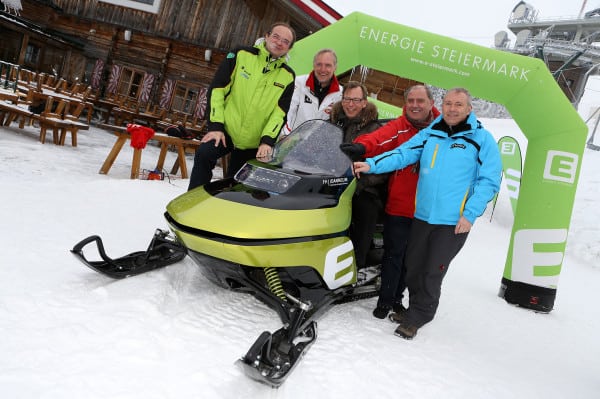 The idea of an electric powered snowmobile certainly isn’t new. We’ve seen a smattering of hybrid examples over the past 10-years as shade-tree engineers converted an existing sled into battery powered prototype (such as the Austrian Snowbird E-Snowmobile pictured above developed by FH Joanneum University and Energie Steiermark). However, as technology continues to evolve and after having sampled a few different iterations of electric powered motorcycles with surprising performance, the idea is becoming more and more palatable. Thus, when we caught wind of Taiga Motor’s attempt to build the first production electric snowmobile, we were intrigued. While the vehicle is still in very early stages of development, according to the Taiga website the planned snowmobile will weigh less than 230kg (507lbs), will deliver 0-100km/h (0 – 60mph) in 3.2 seconds, tout a range of

Taiga won’t be the first to develop an electric powered snowmobile. A joint effort between FH Joanneum University and Energie Steiermark of Austria built this Snowbird E-Snowmobile during the winter of 2013.

100kmh (60miles), and will have a recharge time of just 50-minutes. In addition, Taiga engineers claim the cold weather performance of the vehicle, something that has been a major hurdle for all electric powered vehicles, will deliver 95% performance at -40 degrees. Of course, some of the biggest benefits of an electric snowmobile, at least when it comes to the environment, is the “zero” emission output and whisper quiet operation of a claimed 62 decibels. We’ve put our name on the list with Taiga to get our butt in the saddle of one of their early prototypes. Until then, you can keep tabs on their progress at www.taigamotors.ca