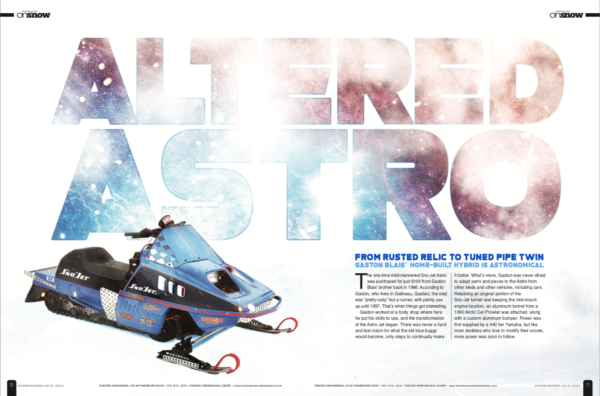 The one-time mild mannered Sno-Jet Astro was purchased for just $100 from Gaston Blais’ brother back in 1986. According to Gaston, the sled was “pretty rusty” but a runner, and it got plenty of use up until 1997. That’s when things got interesting. Gaston worked at a body shop where here he put his skills to use, and the transformation of the Astro Jet began. There was never a hard and fast vision for what the old blue buggy would become, only steps to continually make it better. What’s more, Gaston was never afraid to adapt parts and pieces to the Astro from other sleds and other vehicles, including cars. Retaining an original portion of the Sno-Jet tunnel and keeping the mid-mount engine location, an aluminum tunnel from a 1990 Arctic Cat Prowler was attached, along with a custom aluminum bumper. Power was first supplied by a 440 fan Yamaha, but like most sledders who love to modify their scoots, more power was soon to follow. 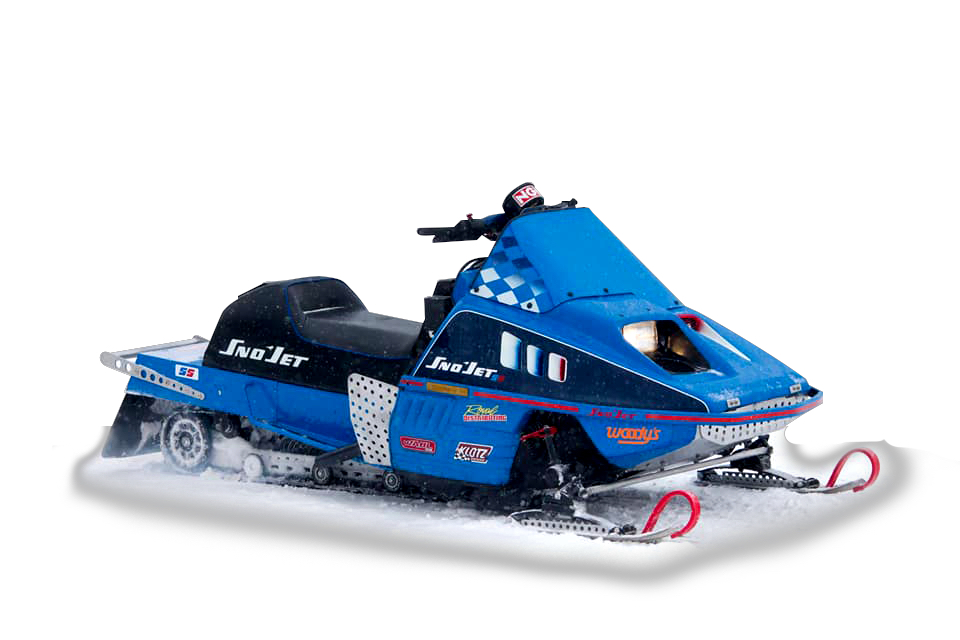 The Astro is now a full-fledge drag racer with a burly ZR800 twin-cylinder, liquid spooling power through Arctic clutching and an adapted Ski-Doo Summit chaincase. The beautiful installation with accompanying curved pipe was performed by Gaston’s friend Yvon Bastien, from Desormeaux Lake at Northfield Quebec. To make sure all that new found power gets to the snow pack, a Wahl 136-inch suspension has been employed out back, and to keep things stable, the ski stance has been widened to 43-inches.

More than just powerful and fast, the Sno-Jet looks equally good, and once again a hodge-podge of pieces were fabricated and blended together. A Wildcat belly pan was cut and fabricated, along with pieces from a 1996 Chevy Cavalier (yeah, you read that right). On the top-side the Sno-Jet now features a Kawasaki Drifter bumper and hood, Ski-Doo Mach 1 vents, Wildcat vents, as well as portions of the original Sno-Jet hood, and lots of expert fabrication and plenty of patience to get everything just right. 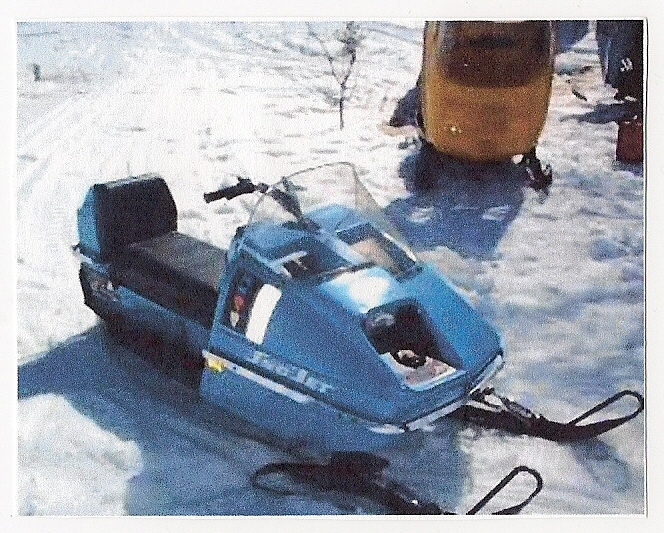 The 1974 Sno- Jet served the family well for many years, and was purchased by Gaston from his brother in 1986. 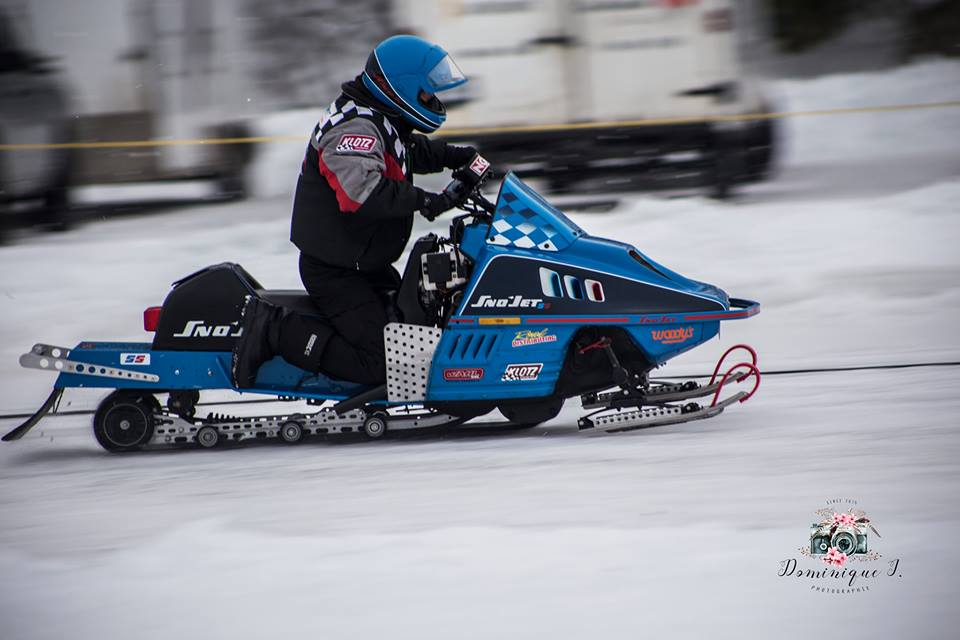 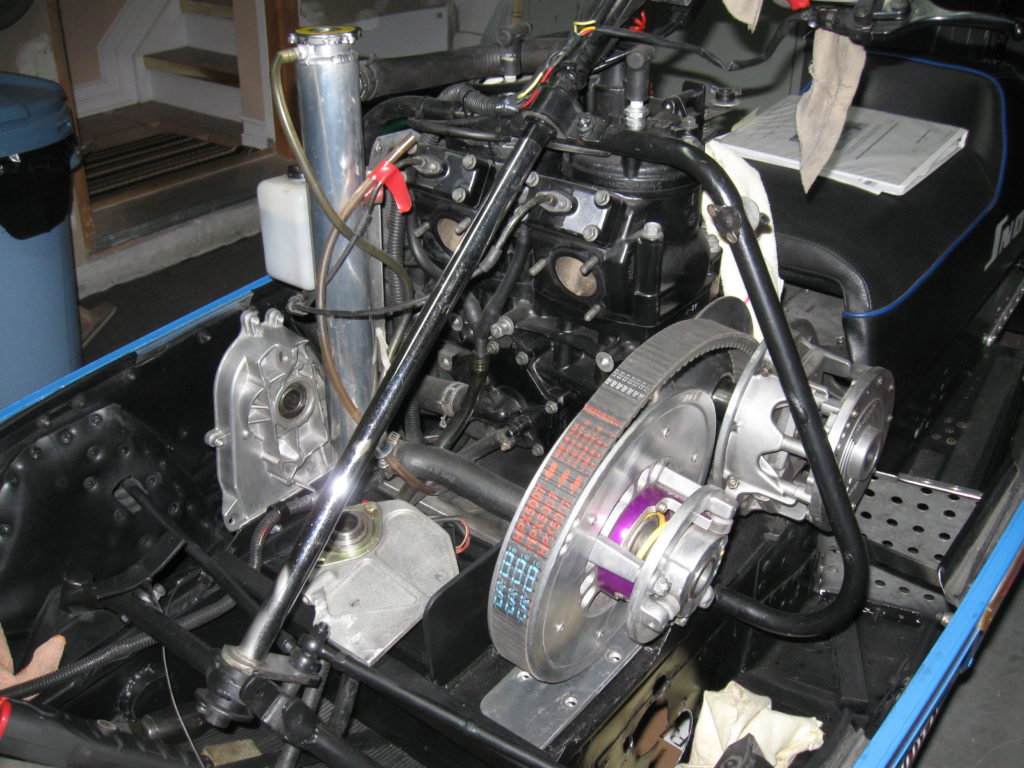 Gaston employed the help of his best friend Yvon Bastien to fit the 800 twin into the old Sno-jet bulkhead. 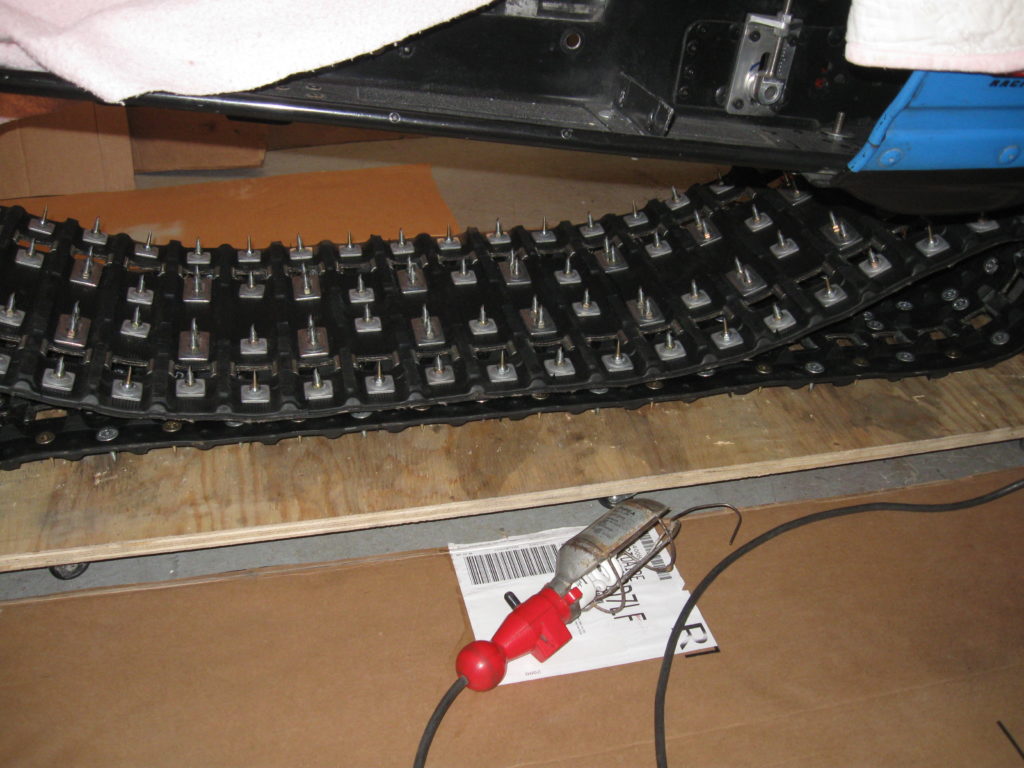 More power requires more traction, and a shallow lug, ice-drag track was outfitted with a combination of Woody’s studs for added “bite”. 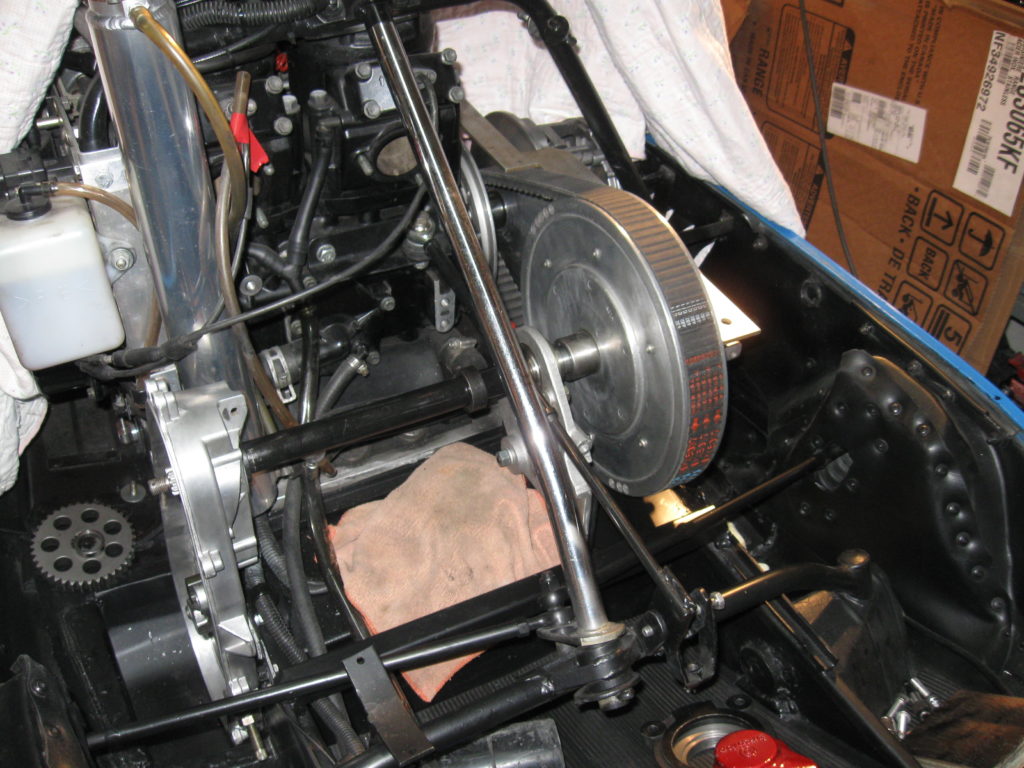 An Arctic Cat secondary feeds power over to a Ski-Doo Summit chaincase, all of which is still located ahead of the tunnel mounted engine. 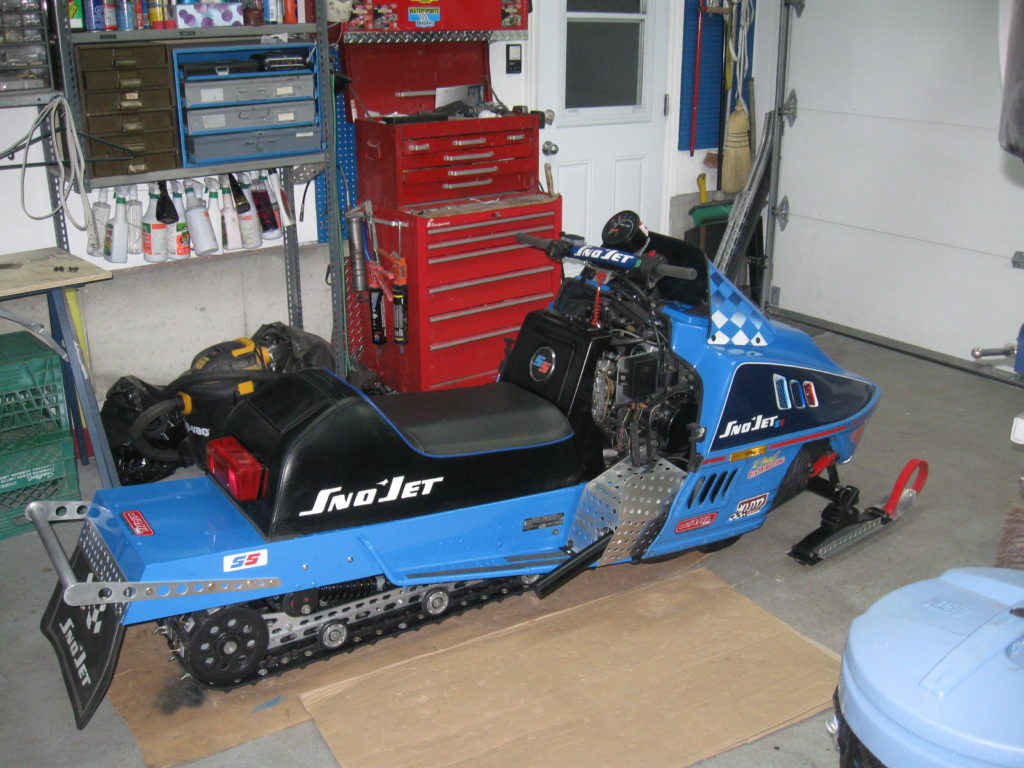 Gaston feels confident there isn’t another Sno-Jet anywhere quite like his. We couldn’t agree more. 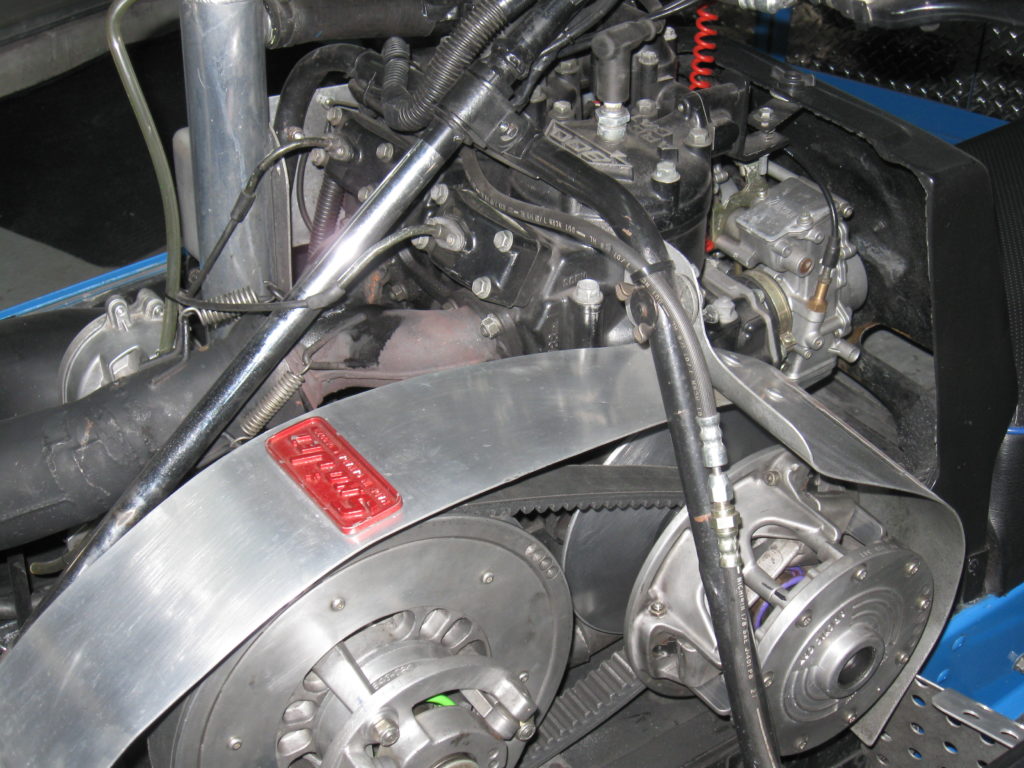 Things got a little tight when the big Suzuki got lowered into place, but patience and craftsmanship won the day. 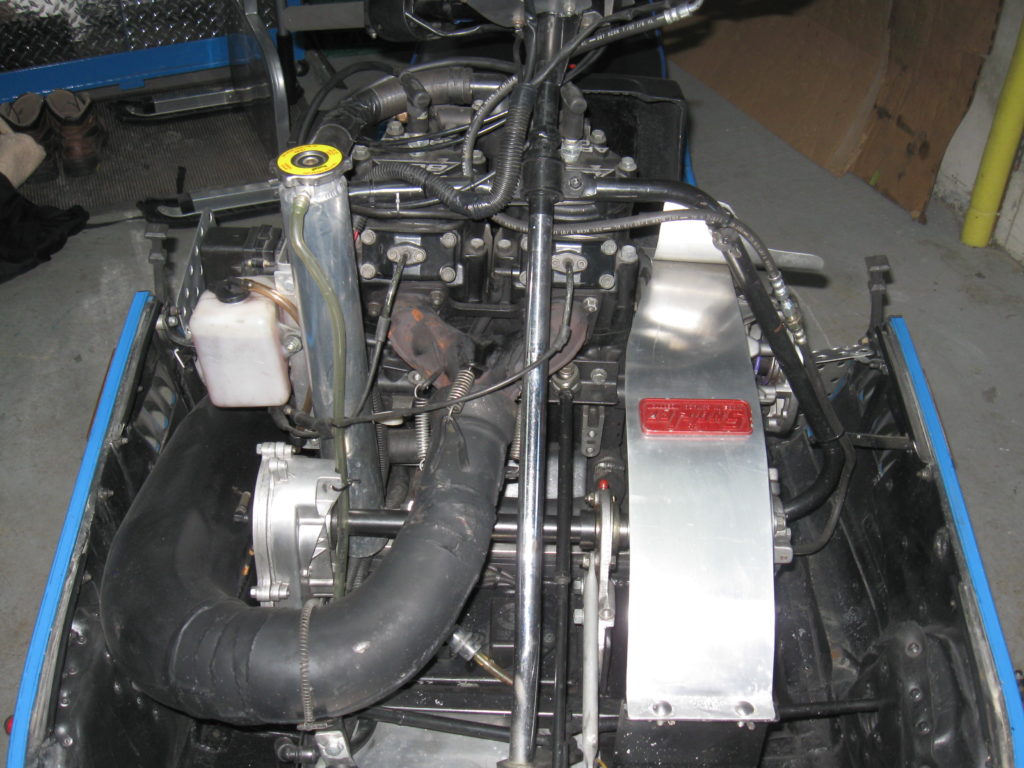