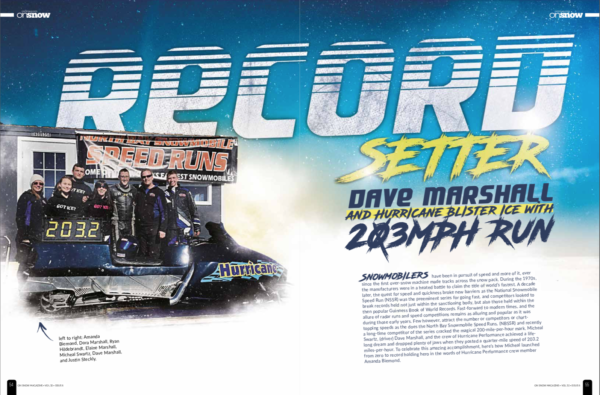 Snowmobilers have been in pursuit of speed and more of it ever since the first over-snow machine made tracks across the snow pack. During the 1970s, the manufacturers were in a heated battle to claim the title world’s fastest. A decade later, the quest for speed and quickness broke new barriers as the National Snowmobile Speed Run (NSSR) was the preeminent series for going fast, and competitors looked to break records held not just within the sanctioning body, but also those held within the then popular Guinness Book of World Records. Fast-forward to modern times, and the allure of radar runs and speed competitions remains as alluring and popular as it was during those early years. Few however attract the number or competitors or chart-topping speeds as the does the North Bay Snowmobile Speed Runs (NBSSR), and recently a long-time competitor of the series cracked the magical 200-mile-per-hour mark. Micheal Swartz (driver), Dave Marshall, and the crew of Hurricane Performance achieved a life-long dream and dropped plenty of jaws when they posted a quarter-mile speed of 203.2 miles-per-hour. To celebrate this amazing accomplishment, here’s how Micheal launched from zero to record holding hero in the words of Hurricane Performance crew member Amanda Biemond. 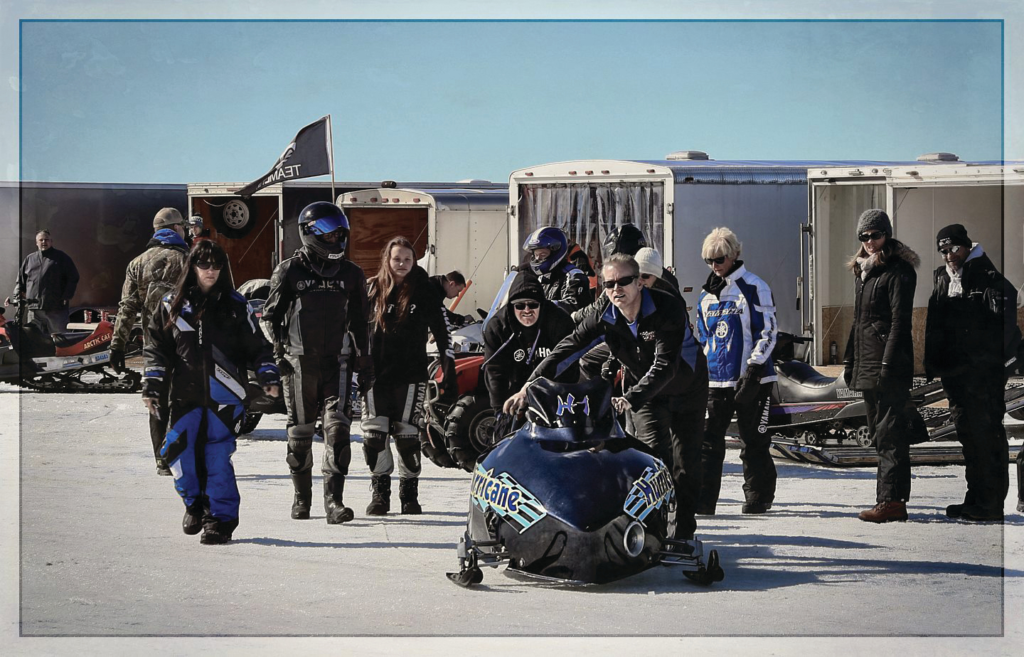 Surrounded by family, friends and teammates, Dave Marshall achieved his lifelong dream of breaking the 200mph barrier with a recorded run of 203.2mph (327km) in a quarter-mile (1320ft) with driver Micheal Swartz making the daring run.

Since the evolution of Hurricane Performance in 2012, Marshall has been making pass after pass on his journey to the top. Several monumental runs including 186.3 and 187.3 started his exciting climb towards the magical 200mph barrier. Last year, Marshall and team set the previous record of 192mph. 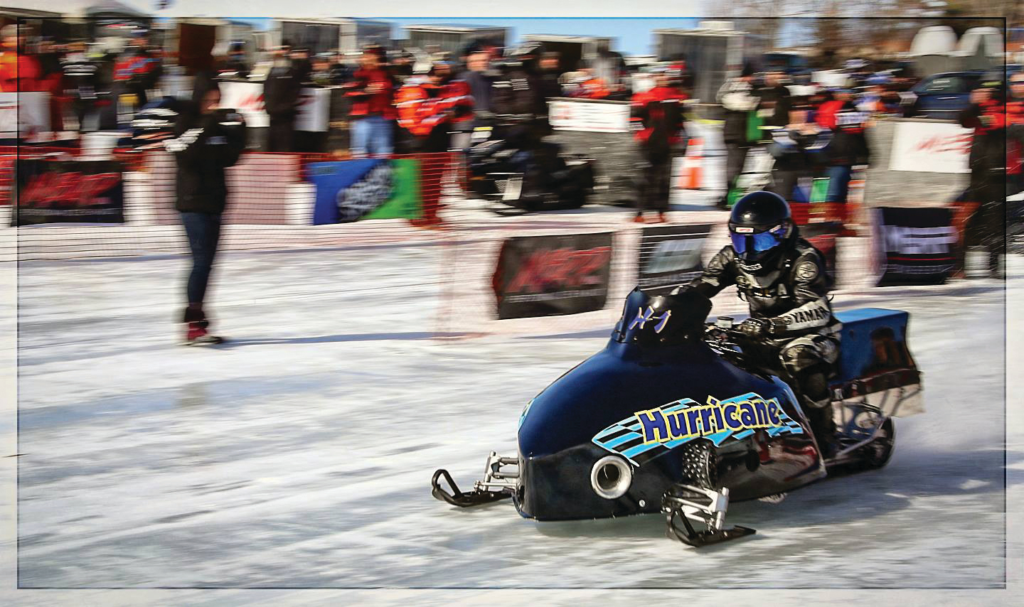 With great ice and wind conditions, Hurricane arrived at Canada vs the World with their sights set on the magic number. Right out of the trailer the Hurricane sled made a pass of 181.1. On the second pass, fans were amazed with an astonishing run of 197.9mph, an unseen record!

Then, on the next run, it happened. Crowds erupted, team members hugged, and tears were shed between owners Dave and Elaine Marshall of Prescott when the speed of 203.2mph lit up the board. Mashall’s daughter Hurricane Dora also shared in the record excitement, setting class records of her own that weekend with NBSSR.

At the close of the weekend, Swartz and Marshall were recognized with top speed of the weekend. Marshall was also presented a hat for his accomplishment of breaking the 200mph barrier; a hat NBSSR owner Claude Levasseur said he had been holding onto for this moment for nearly 5-years.

Marshall thanked NBSSR owner Claude and NIki Levasseur; his race family and driver Swartz for all of their support on this journey; as well as his home team consisting of Brandon Lasenba, Ryan Hildebrandt, Justin Steckly, and Amanda Biemond. He also gave a special honorable mention to his beautiful wife Elaine Marshall. Without her Marshall said, the journey would not have been as fun. Her constant support throughout the years, helping hand and sharing in the vision has propelled Hurricane Performance towards the goal.

Shortly after the achievement, Marshall announced the retirement of the Hurricane outlaw sled. Although unsure what the future plans are for the record setting sled, Marshall remains committed to the company’s future. Marshall plans to focus on the summer racing circuit and growing his world class performance company. 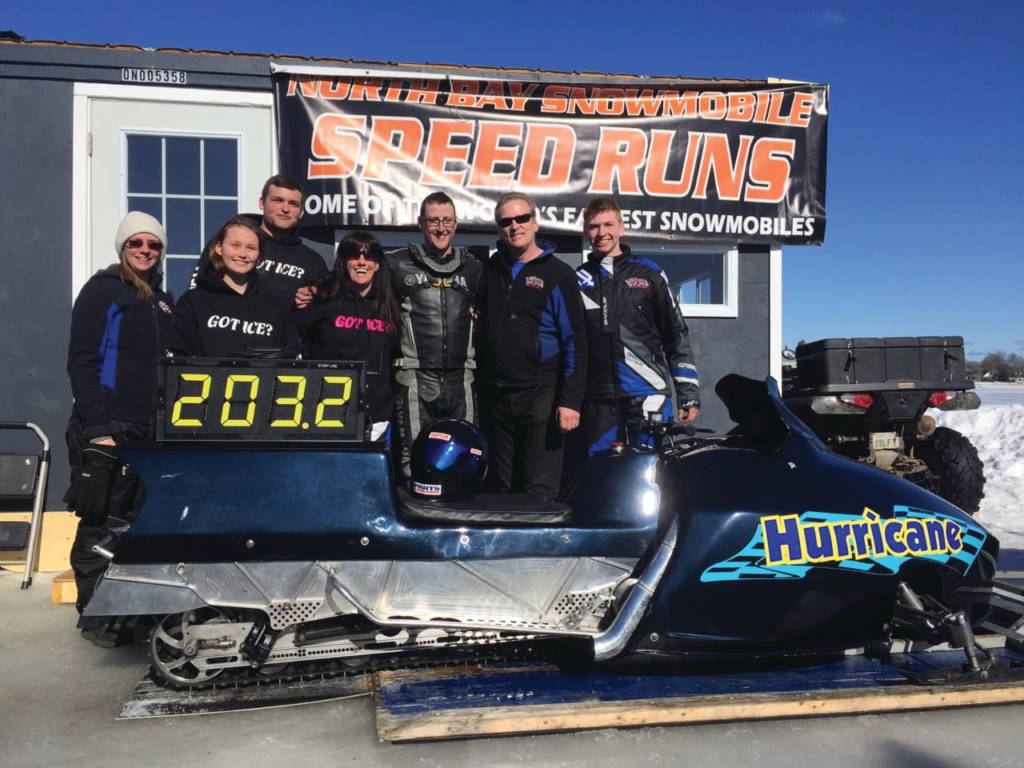