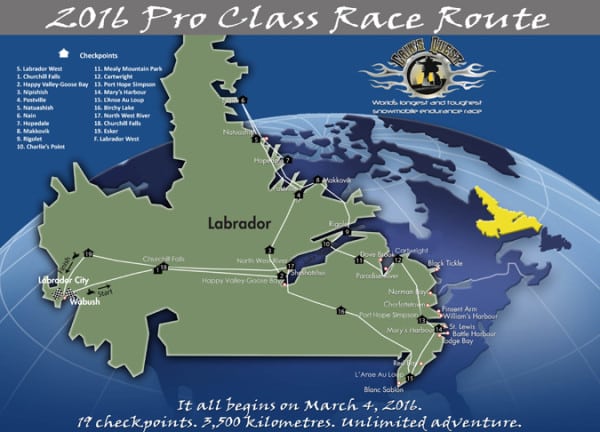 It is official ladies and gentlemen: Cain’s Quest has just released the routes for this year’s race as well as a very important date change for the start of the race.

It’s been labelled the world’s toughest endurance race, and this year’s routes will be as rugged as ever. The pro class racers will now depart Labrador West at 6:00 on march 4th  (as opposed to the original announced date of March 5th.) and will pass through a total of 19 checkpoints and cover a mind-blowing 3,500 kms. The trail class option is a recreational route that leaves one day later from Lab West and will take racers through a route that will let them experience the thrill of Cain’s Quest racing at a shorter distance of 1200kms.  For complete details, below is the official press release from the offices of Cain’s Quest.  Now get out there and prove how tough you really are.

Labrador City, NL, November 23, 2015 – Cain’s Quest today announced the route for both pro class and trail class, as well as an important date change for the race start.

The pro class racers will now depart Labrador West at 6:00 p.m. on March 4 vs the original announced date of March 5. They will then head to Happy Valley-Goose Bay before starting their north coast journey to Nain. From there, racers will travel to the south coast to L’Anse Au Loup before making their way back to the finish line in Labrador West through central Labrador, completing a full Labrador circuit, passing through a total of 19 checkpoints and covering an estimated 3,500 kilometres.

“We want to offer racers an extreme snowmobiling adventure that showcases the raw beauty that this part of the province offers, from the iron-rich Labrador trough, to the fiords and mountains in the north and the bogs, hills and valleys in the south,” said Glenn Emberley, chair of Cain’s Quest. “We also want to ensure that this race unites all of Labrador, its people and cultures.”

The ambitious route will continue to give Cain’s Quest bragging rights as the world’s longest and toughest snowmobile endurance race. It is, as in past races, subject to change depending on environmental circumstances like weather or snow conditions.

“It is impossible to predict what will happen once racers leave the start line,” added Glenn.

The rules, which will be released in the coming days, are currently being tweaked to include important feedback from racers and lessons learned from the 2014 race.

“We are taking our time to extensively review the rules with safety as our number one priority,” said Glenn. “I think racers will be happy about many of the changes, particularly that we are attempting to maximize daylight running time and lengthening mandatory layovers. This is a large part of the reason why we moved up the start date as well.”

Thirty-four teams are already on the roster, each vying for the hefty $100,000 prize purse. Final registration closes on November 30, 2015 and there is a maximum capacity of 40 teams.

The trail class option is a recreational run that will also start in Labrador West but depart a day later on March 5. The route will have teams travel through Labrador’s interior to Happy Valley- Goose Bay and then back again, with Churchill Falls as a checkpoint each way, for a total of

1200 kilometres. Although they will experience wilderness racing, it is non-competitive and much shorter. Registration for trail class will open December 1 with an entry fee of $1895 per rider. Rules will be finalized once the pro class rules are released.

“Trail class riders will get a small taste of the Cain’s Quest experience,” said Glenn “They will encounter some of the same challenges as pro class, like backcountry riding and extreme weather conditions, without the pressure of long-distance endurance riding.”

As a non-profit organization, Cain’s Quest is extremely grateful for its funders, sponsors and supporters. A revamped sponsorship package has been developed for the 2016 race and there are tremendous opportunities for corporate, product and checkpoint sponsors.

“This year, we are thrilled to announce a new partnership with Provincial Airlines/Innu Makun, the official airlines of Cain’s Quest 2016,” said Glenn. “They are also sponsoring two north coast checkpoints.”

Provincial Airlines and Innu Mikun Airlines together provide reliable service to 20 destinations in Eastern Canada, including an extensive route network throughout Newfoundland & Labrador.

2016,” said Stephen Dinn, Vice President of Business Development with Provincial Airlines. “We are committed to providing support to great community initiatives throughout all of Labrador and we are excited to be a part of this premier event. Our contribution will see us providing in excess of $15,000 in support for Cain’s Quest and help to make the 2016 event the best one yet,” added Dinn.

Cain’s Quest is an incredible off-trail riding adventure where teams of two battle in an all-out race through deep snow and thick wooded areas in some of the most remote parts of Labrador. The race is managed by Cain’s Quest, a volunteer-run, non-profit organization.

For more information on Cain’s Quest, including how to register or volunteer, visit. Follow us on Twitter @cainsquest, use #cq2016 or join the conversation on our Cain’s Quest Facebook page.