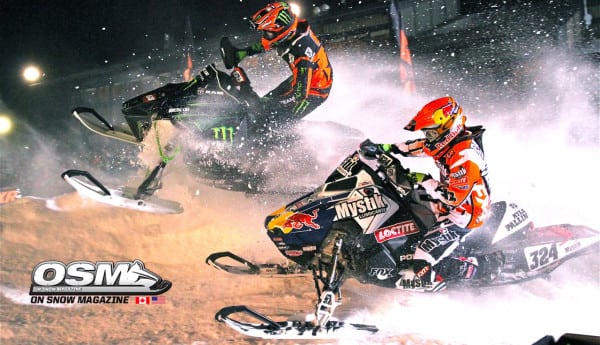 If you follow the national snocross scene you likely have heard by now that the International Series of Champions (ISOC) the governing body and promoter of the AMSOIL Championship Snocross tour has implemented a major rule change this season that has been the focus of much debate. The “inversion rule” as it has become known, impacts the Pro Open class for the 2015-2016 season and as the name implies, racers will get lane choice for the start of the final in reverse order. In other words, the 10th place qualifier gets first pick at the line for the final and subsequently the number one qualifier gets the last remaining spot.

Some have dubbed this the “Tucker Hibbert Rule” as it appears, at least on paper, as a way to level the playing field in the competitive Pro-Open ranks. For the record Tucker is a nine time year-end champion and is the reining king for the past three years.

In addition to the inverted final lineup, ISOC has changed the year-end point structure; awarding more points for qualifying than they have in the past in an effort to eliminate “sand bagging”. So far that part of the rule change has worked, but the jury remains out on the inversion rule.

Clearly the racing can be far more exciting when Tucker or any other one of the top racers gets a poor start and are forced to work their way through the pack. It happened in Duluth in round 2 where Tucker narrowly missed another victory to Kody Kamm and likely would have gotten it if he had one more lap. This past weekend, the rule snared Hibbert as he qualified first and was forced to take the far outside lane at the line. As a result, a first turn melee pushed Tucker off the track and deep into the pack. He recovered but failed to make the podium, finishing in fourth behind Tremblay, Renheim and Kamm.

Depending upon whom you talk to, most teams were in favor of the rule and it was a topic of much discussion throughout the off-season between ISOC and everyone involved. While we have our own opinions about the rule, we thought it would be interesting to follow along this season with our own year-end championship points structure…one in which we will only award points in the final and not qualifying. It’s a straightforward formula where the winner of the Pro-Open final receives 15 points, second place 14 and so on (there are 15 riders in a full field final, 10 in the front row and 5 in the back row).

Already there are few interesting discrepancies shaping up between the official ISOC year-end points and our own. How this shakes out at the end of the season is anyone’s guess, but you can follow along here and find out with us.