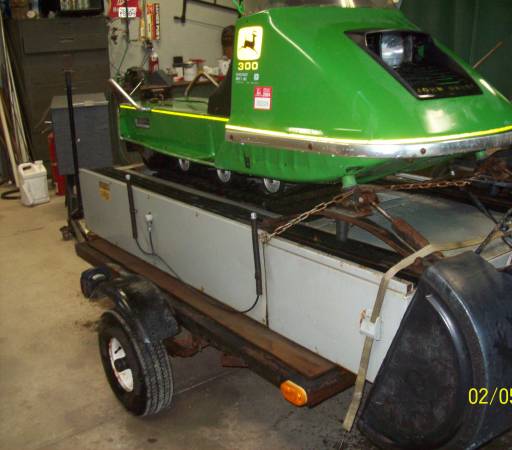 Our curmudgeon editor Bourgeois is constantly surfing the interweb in search of all things snowmobile related…the older the better. As he says, “anyone can go and buy a new snowmobile, but not just anyone can rebuild and ride an old one.” But here’s one he found in the cheddar state of Wisconsin that you likely won’t be riding anytime soon, nor would you want to. This old John Deere JD 300 is perched atop a vintage dynamometer, used to measure horsepower, and according to the current owner’s posting, was built especially for John Deere and is extremely rare. Unlike an engine dyno, this one measures power where it matters most – at the track. Apparently the unit still functions and as you’ll see in the ad, has won a few awards at the local spit and shine shows. You won’t be sticking this one on the mantle but it’s sure to start a few conversations in the shop over few tall cold ones.

Original Ad: Manufactured by Owatonna Tool Co. in the early 1970’s for John Deere. Very rare only one of a few made that are left that I know of. Comes mounted on it’s own trailer with very new tires, rims and lights. Includes JD 300 snowmobile as shown. Everything works as it should. I took this unit to many vintage snowmobile shows displayed and ran it and won many trophies and awards over the years.

See the ad HERE until its sold.