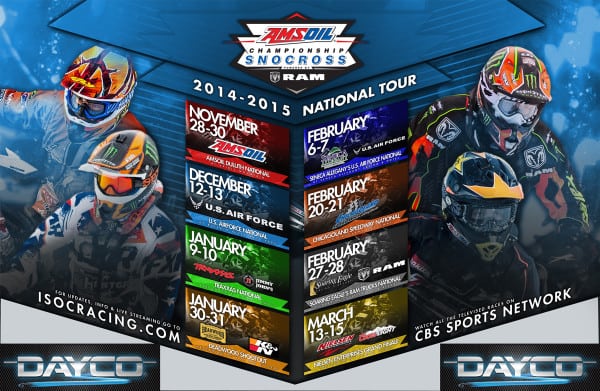 OSM learned this week that Dayco and ISOC announced an alliance that names Dayco as “The Official Belt” of the Snocross Circuit. Along with the CSRA and ECS circuits this partnership adds another impressive sponsorship for the makers of premium snowmobile belts. To follow is the official press release from the group:

MINNEAPOLIS (Jan. 21, 2015) – Officials with ISOC are pleased to announce a strategic alliance formed with Dayco, a global leader in the research, design, manufacturing and distribution of a broad range of belts, tensioners, dampers, pulleys, hose and hydraulics equipment for the automotive, industrial and aftermarket end-markets, including those for the snowmobile and ATV industries.

Now recognized as the “Official Belt” of AMSOIL Championship Snocross, powered by Ram, Dayco steps up to the pinnacle of competitive snowmobile racing, adding ISOC, along with CSRA and ECS, to its impressive list of race circuits and teams it sponsors in snocross, ice oval, hill climb, cross country and drag racing, along with numerous backcountry snowmobile enthusiasts. Dayco has also been named the Presenting Sponsor of the 2014-2015 Grand Finale, March 13-15 in Lake Geneva, Wisconsin.

“ISOC is one of the world’s premier snowmobile race circuits and Dayco is excited to be named the Official Belt for the 2014-2015 season,” said Brian Wheeler, Marketing Manager for Dayco. “We’re confident this partnership will help Dayco reach snocross enthusiasts throughout North America while giving ISOC and its racers the technical expertise needed to help them succeed.”

Snowmobiles are only as good as the belts wrapped around their clutches as the drive belt is key to delivering power from the motor to the snow. Dayco’s high-performance snowmobile drive belts offer a range of options specific to your level of riding. From the casual rider looking to hit the trails on the weekend, or an all-out intense snocross racer, Dayco has the snowmobile belts you need to ensure you are not left at the back of the pack.

“ISOC is pumped to have Dayco on board with AMSOIL Championship Snocross, powered by Ram, for the 2104-’15 competition season,” said Carl Schubitzke, ISOC President and Race Director. “Dayco’s high-quality products are manufactured right here in the United States and already used by many of the competitors on our professional and amateur regional race circuits. And from amateur to pro, racers understand the importance of a belt’s role in high performance sleds. Dayco leads the industry in this area.”