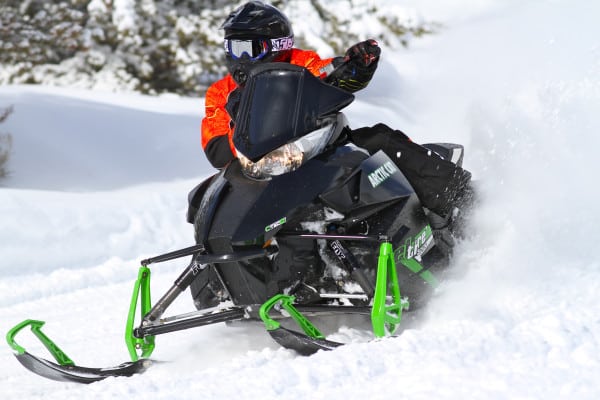 News of Arctic Cat’s launch of a long awaited two-stroke 600 motor in consumer trim was reason enough for most sledders to get excited about the coming year for the Cat. However learning the new slotted piston mill would be nestled into a throwback namesake buggy dubbed the El Tigre had some of us in the OSM office positively smitten. For those with flat brim hats who think snowmobiling was born when Slednecks volume One hit the shelves in then glorious VHS, (in stereo no less), a history lesson is in order.

The El Tigre namesake debuted in 1973, but it wasn’t until 1978 and subsequent years, did the “tigre” name take on greater significance, especially in the hearts of other brand owners. It was in ’78 that the 6000 series El Tigre was introduced; the first consumer based liquid-cooled snowmobile from the Thief River Falls maker. From 1978 to 1981, the El Tigre 6000 was regarded as the “fastest production snowmobile in the world” with its quick revving 440 liquid cooled motor and lightweight and incredibly stable (for the time) chassis.

Now the 6000 El Tigre returns for 2014, powered by yet another significant new motor for Arctic Cat. This time the 600 twin marks Arctic Cats first foray into the ultra clean burning two-stroke segment with an all in-house designed and manufactured semi-direct fuel injection system. The new motor utilizes a slotted piston design and accomplishes clean burning and low fuel consumption marks without the complexity and costs of true direct injection.

The 6000 series motor is quick to rev and loves to spike in and out its power band with quick stabs of the throttle. Yet you’re reminded the fuel delivery system is still of a semi-direct design the moment the motor fires to life (available in electric or pull start) as the idle and just off-idle run quality is likened to any other semi-direct design. Whisps of blue smoke and a slight gurgle as the motor comes off idle is still present. The near electrical run quality of a true direct injection design is due to the direct atomization of fuel in the combustion chamber, something the new Arctic Cat engine or any other semi-direct design simply can’t achieve due to the very architecture of the engine.

Still the important thing here is the new 600 mill meets the most current and stringent EPA requirements and delivers improved fuel economy with incredible durability, (at least according to the long term test mules we’ve sampled and seen the high mileage internals of). More importantly is how well the motor runs at engagement and beyond. The motor is a ripper, and while final calibrations and clutching are still be tweaked, the motor hits full shift rpm with right now authority and delivers a harmonious max rpm tone that leads you to believe it would be perfectly content to spin there all day long.

Together with the ProCross chassis, the balance is one of the best from the Cat stable we’ve sampled to date. Calibrations delivered flat handling, predictable turn-in and apex exits, and one of the better overall ride qualities during our week of new model tests. While we weren’t given final weight numbers from Cat, the new engine is said to be about 10-pounds lighter than their older 600EFI engine. Given the balance and feel of the overall El Tigre 6000 package, whatever the final weight is, its one that makes the ProCross chassis very happy.

You’re looking at what could very well be the most coveted 600 cube two-stroke on snow this winter. Cat has at least 3 years of on the snow performance and durability testing completed with the engine that has been in the development loop for just over 7-years.