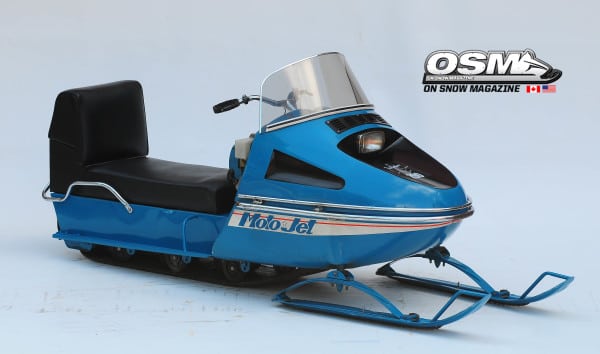 LOST TO TIME… Snowmobiling was big business in the late 1960s and early 1970s. Over the course of snowmobile history there have been some 130 manufacturers (maybe more according to the Antique Snowmobile Club of America) who have tossed their hat in the ring with some sort of snow machine offering. However, it’s tough to pin down the exact number since some “brands” subbed their product out to larger, more established manufacturers and were simply looking to capitalize on the snowmobiling fad.

In 1971 there were roughly 20-some manufacturers looking to cash in on the snowmobile fad by offering snow machines to burgeoning enthusiasts. One of them, based in St.Martin, QC, was called Moto Jet. Located just the other side of Sherbrooke from Valcourt, even today St. Martin is but a speck on the map. Interestingly, the Region, known as the Chaudiere-Appalaches, was home to some 15 manufacturers who came and went with Ski-Doo the only one that remains today. It was definitely a hotbed for snowmobile manufacturers, maybe even on par with Northern Minnesota.

Beyond any of this, our sled for this issue’s Time Machine is somewhat shrouded in mystery since much of the information regarding Moto Jet and it’s machines has been lost to time. Featuring a stylish, football-shaped hood and belly pan combination, the Moto Jet held its own against some of the other snowmobile designs on the market in 1971. It featured a distinctive blue and white color scheme, which we might guess, reflected the colors of the flag of Quebec. A review of the spec sheet and dealer brochures gives us a view of the mindset of the manufacturers who were jockeying for position within the industry back then. Like Moto Jet, many of them were trying to the blend the coveted attribute of high-performance with durability and fuel economy.

Moto Jets were powered by CCW (Canadian Curtis Wright) engines, and they were competent engines for the day. Product info bragged that the engine boasted “High revolution, fast acceleration, low fuel consumption” and it was “light, stable and easy to repair.” The carburetor was “high-performance” and made specifically for the CCW engine. The primary clutch worked on ball bearings and gave the sled “all its power in a continuous way.” Clutches were balanced to 5,000 RPM. An oil bath aluminum chain case was fitted with 15-spline gears to “eliminate breaking and cracking” and it transferred power through a “rustless” roller chain.

Using an 18-gauge industrial steel chassis, Moto Jets featured standard-for-the-day leaf spring front suspension. Out back, 12 bogey wheels rode inside a suspension constructed of steel and aluminum and, according to Moto Jet, kept the track “constantly in contact with the soil, even on hilly ground.” Instead of cleats, the sled used a rubber track molded with steel rods. The seat boasted “two positions for better comfort” and was “well stuffed.” There was storage under the seat for a 1-gallon spare gas tank and tools. Sled options included electric start, speedometer, tachometer, and reverse.

This Moto Jet 290 is a 1972 model and was rated at 20-horsepower. Interestingly, the 1971 Moto Jet 290 was a single cylinder. In addition to sleds, Moto Jet also offered dealer options such as covers, trailers and Cat Cutter-style trailers to tow behind their machines. We’re not sure about “The Honker” logo as there is no reference to that being any sort of sub-model in Moto Jet brochures.

With only a short three-year life span, most of Moto Jet’s history and products have been lost to time. The brand is yet another example of the vibrant, innovative and rapid growth the industry experienced during its brief heyday. This Moto Jet is currently on display at the Snowmobile Hall Of Fame in St Germain, Wisconsin. For more information on the Hall of Fame and to plan your own trip back in time, visit their website at www.snowmobilehalloffame.com.