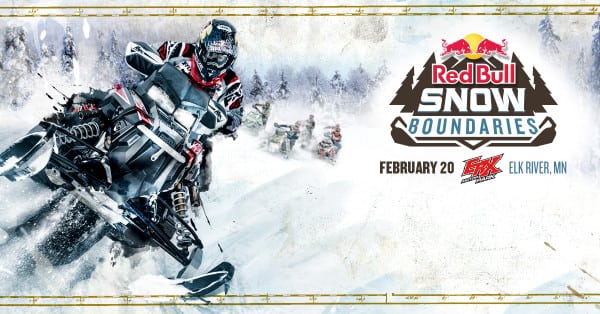 Last winter Mother Nature just didn’t want to cooperate with several events and races slated during the heart of winter forcing the cancellation of many of these marquee events. Red Bull Snow Boundaries was one such “big race” but those kids from Red Bull are determined to make the first of its kind race happen this winter. Dubbed Snow Boundaries, the cross-country endurance race will be held Saturday, February 20th at ERX Motor Park in Elk River, Minnesota; a growing motorsports facility 30-minutes north from downtown Minneapolis and a “home base” testing facility for

OSM U.S. based editors. Thanks to recent land acquisitions connected to the original 13-acre park, ERX now has access to more than 300 acres of varied terrain and the ability to make snow throughout much of the facility. The Red Bull Snow Boundaries race will feature a 13-mile closed-loop course and will include a multitude of terrain types including swamps, frozen ponds, vertical climbs, twisting wooded trails, high-speed chutes and snocross. The race will feature two classes – Ditchbanger for amateur racers and Open Racer for those with sanctioned racing experience. Racers will be randomly seeded for start times and will embark on the grueling course in rows of 10, spaced 30-seconds apart. Ditchbangers will race for 2-hours plus one lap while the Open Racer class will continue on for a total of 4-hours plus one lap. All told there is more than $100,000 up for grabs in what is sure to become one of the most talked about events in the industry for this winter and many to come. Registration is just $125 (if you sign up early) and the event will be free to spectators. You can learn more and sign up now at www.redbull.com/snowboundaries