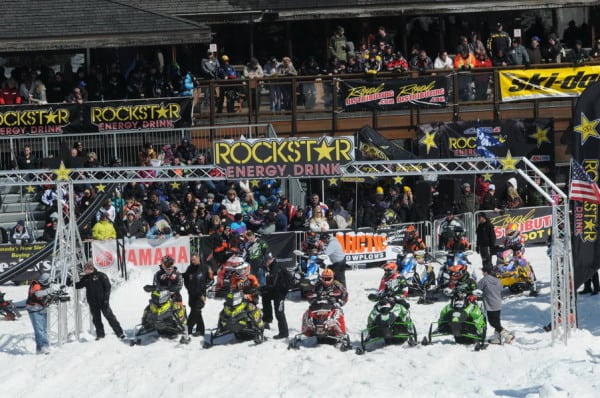 The season is winding down north of the border in CSRA. Here is the official report from their Kitchner event:

The Rockstar Energy Snowcross Championships took place at Chicopee Ski Club in Kitchener, Ontario this past weekend. There was plenty of snow left over from the ski season, a record amount of snow for Chicopee, which translated into an extraordinarily large track. Wrapping up the hill with huge step-up jumps and winding down with a rhythm section of bumps in front of the chalet, lap times were almost double to what racers were accustomed to, clocking upwards of a full minute for the Pro Open class. With all other race circuit’s seasons concluded, CSRA saw larger class sizes and are expecting even more at the season finale at Horseshoe Valley next week, March 29th – 31st.

Once the racing was finished on Saturday, the winners of each division in the CSRA Triple Crown Series were treated to a chartered coach bus ride to Toronto to watch the AMA Supercross race at the Rogers Center. The Supercross racing closely resembles the same kind of action seen at a CSRA Snowcross event, with the exception of the machines and the track material. Fun was had by all and after a late return, it was off to bed to rest up for another competitive day of racing.

Sunday was just as beautiful as Saturday with a record spectator attendance for the event. In the racing action, most of the same faces were seen at the front of the pack once the green flag dropped. Alex Cecco #133 swept the Junior 2 (14-17 years old) class, placing first in the finals on both days. In the Sport 600 class, #211 Blake Taylor and #637 Mitch McNair took turns on the first and second place podium positions. Taylor took the win ahead of McNair on Saturday and McNair beat out Taylor for Sunday’s win. The other half of the McNair brothers -Steve McNair #377, took third place on Sunday and in only their second year competing these brothers have proven they are going to be a serious threat to the higher ranks in the near future. Andrew Sloot #27, who competes in the Pro Open class, dominated the Pro Vet class, while Alex Colvin #811 finished second and Ric Wilson #4C finished third. In the Pro Women’s class, it was the youngest of the group #434 Alexxa Callan, who dominated the weekend. Callan took the win in each of the three motos and went on to grab the checkered flag in the final. Second place went to #506 Kendall Knox of KK Motorsports/Birch Point Marina, who was on the bumper of Callan in two out of the three motos. Third place went to #166 Shelby Mahon in her first race back after an injury earlier in the season. This week’s addition to the afternoon feature events was the Trailsport 600 class. The Trailsport 600 class is designed for first year racers to have a safe environment to hone their skills before taking to the track with more experienced racers in the Sport class. This year, there has been an obvious natural in the division, #454 Mitch Sobil. Sobil is from Minden, Ontario racing on a Polaris for his first year. Sobil just recently took home the Triple Crown Championship and is after the 2013 Regional Championship, holding on to a healthy points lead going into the last round. Also on the podium for the Trailsport 600 class on Sunday was #142 Stephen Haasnoot of Wroexeter, Ontario in second place and #401 Mark Thomson of Nobleton, Ontario in third.

With current Pro-Lite National points leader, #282 Devin Wilson, still with a cast on his arm from an injury suffered in Valcourt , Que., it presented a chance for some of the other Pro Lite riders to shine. Chris Robertson #720 of Flying Dutchman Racing, who has been consistent all year, found himself atop the podium for Sunday’s Pro-Lite final. Mitchell King #18 grabbed another second place and finishing third was #22 Brandon Bradbury who travelled all the way from Yellowknife, NWT for the event! Sunday’s ten lap Pro Open final saw Hayden & Joanis battle it out up front the entire race. On the last lap, Hayden suffered from a collapsed front shock on the Rockstar Energy Polaris, which handed the win to Dave Joanis on his Royal Distributing/Hall Ski-Doo. Hayden held on for second, and after some last minute work by his mechanic to fix engine troubles in qualifying, Dylan Hall captured third place.