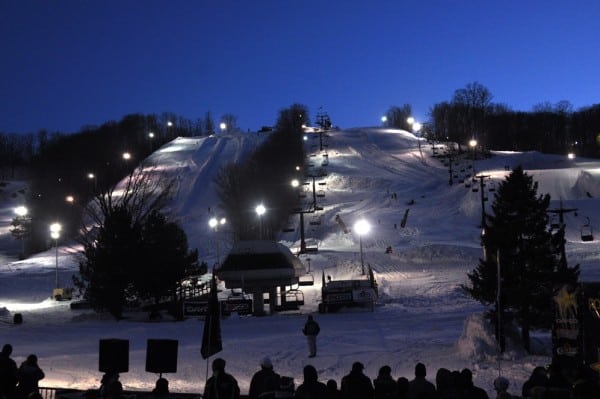 Iain Hayden won again on the CSRA tour and in the process nabbed his sixth Canadian Snowcross Pro Championship. Here’s the full report from the slopes of Horseshoe Valley Resort from the CSRA crew:

Greeted by what could easily be labeled by many as the most spectacular Canadian Snowcross track in history, racers and fans arrived at Horseshoe Valley Resort in Craighurst, Ontario for the final round of the 2013 National Snowcross Championship. Friday night’s show was the perfect way to start the final weekend of racing, Jimmy Blaze performed freestyle stunts much to the excitement of the crowd, complete with a fireworks show. Five separate classes of antique sleds participated in the Lee Memorial Cup Vintage race, making for some laughs, battles, and of course – breakdowns. This was the only event this year where not only bragging rights were on the line – but a cash purse as well! #51 Greg Mance, a regular vintage competitor, took the win in both Vintage 1 and Vintage 2 classes. The Vintage Open Liquid class, which is the feature class of the program, saw #94 Kyle Hammell of Utterson, Ontario grab the win and the Lee Memorial Cup. At just twenty-two years old, Hammel’s 1980 Yamaha Phazer 483 Fan is older than he is! Hammel is no stranger to vintage snowcross racing, sponsored by Erborn Electric & Evans Racing Team, this is his second consecutive Lee Memorial Cup win. In second place, was #404 Harry Paisley on his first generation IFS Polaris Indy 400 Liquid. In third place, #10 Jon Adams on his 1987 Arctic Cat El tigre 6000. Switching ahead to machines that were made this year, the mile and a half long racecourse made for exceptionally long races and therefore a long night of intense action on the track. Racers tested their endurance on the ski hill track that took them up and down a black diamond ski hill not once, but twice. In Friday night’s Pro-Lite final, it was #717 Jakob Rosko- Fong who proved that his conditioning and training all season long was exactly what this track required. #720 Chris Robertson and #14 R.J. Roy finished second and third. In the late evening hours, the Pro Open final lined up at the Rockstar Energy start for their chance to start the weekend off on the top. #93 Iain Hayden took the win in what would later prove to be a very successful weekend for the Rockstar Energy Polaris racer. Royal Distributing/Hall Ski-Doo racer, #115 David Joanis, finished second place ahead of fellow Ski-Doo competitor, #173 Corey Watkinson.

With above normal temperatures and the sun shining bright, sunglasses were on and sunscreen slathered for the feature finals of the afternoon. In the Sport 600 class, it was all yellow on the podium with #637 Mitch McNair on top, #211 Blake Taylor in second place and #259 Jared Heshka in third. In the Pro-Lite division, #79 Josh Zelinski made the trek across the border from Michigan to grab the win. Second place went to #835 Tom Bachly and third to #18 Mitchell King. Last but not least, the Pro Open Final lined up in front of a full crowd. When the green flag flew, it was all about #93 Iain Hayden. Hayden put his Rockstar Energy Polaris out front from the start and didn’t look back. Not far off from Hayden, a battle brewed for second place between Royal Distributing/Hall Ski- Doo teammates, #115 David Joanis and #421 Dylan Hall. In the end, Joanis was able to hold on for second place and Hall in third.

Although not as warm as Saturday, Sunday’s temperatures were still above average and made for an excellent day of racing. National Champions would be determined today and with some competitors only being separated by as little as one point, everything would be left on the line. Added to the afternoon program for this weekend was the Junior 2 division. The Junior 2 class is comprised of racers between the ages of sixteen and seventeen years old, up to a maximum of a 600cc sled with a throttle limiter. Taking the win was #133 Alex Cecco of Caledon, Ontario on a Ski-Doo. Also on a Ski-Doo, #335 Taylor McCoy of Bracebridge, Ontario took second place. #601 Ben Holmes of Brooklin, Ontario put an end to the Ski-Doo sweep by putting his Arctic Cat in third place.

Lining up for the Sport 600 Final, #211 Blake Taylor already knew he had the Championship won. The young racer from London Recreational/Ski-Doo, had a consistent season and had earned himself a comfortable points lead of nearly one hundred points. Behind Taylor in points, four racers separated by only 39 points between them – were on a mission to earn their National placing. Although he could’ve taken it easy, or even not competed, #211 Blake Taylor went out in the Sport 600 Final and took his final win in the Sport class before he moves up to the Pro-Lite division next year. The McNair brothers who have been a threat in the Sport class all season, took the final two places on the podium with #637 Mitch McNair in second place and #377 Steve McNair in third. This gave Mitch enough points to pull off a second place overall finish in the National Championships and Steve a fourth. #779 Tyler Billings, although absent from the podium on Sunday, ended up edging out McNair by a mere four points for third place overall. Next up, the Pro-Lite division. #18 Mitchell King of Stouffville, Ontario would definitely qualify as one of this season’s “Most Improved Racers”. King started off the year outside of the top five, with the turning point not happening until the second last race of the year in Kitchener, where King took two second place finishes. After a third place finish on Saturday, King only had one place left to be – and that’s where he put himself. After a hard fought race, King put his Ski-Doo on the top of the podium in the final race of the year. Rockstar Energy Polaris racer, #717 Jakob Rosko-Fong, who had been sidelined from Saturday’s final with mechanical problems, came back with a second place on Sunday. #83 Mitchell Shea rounded out the top three in third place. When the Pro Open lined up for their final race of the season, the top three National Championship positions were already secured – however, you never would’ve been able to tell as the entire pack battled it out on the track as if they were desperate for each and every last position. In the end, it was #93 Iain Hayden grabbing the Dayco Cup and the 2013 Pro National Championship. This is Hayden’s sixth Canadian Snowcross Pro Championship and he took a moment on the podium to remind his competitors that he isn’t done yet and will be back again for 2014. Taking second place at the Dayco Cup in Horseshoe, was #115 David Joanis followed by #167 Dave Allard in third. After an incredibly successful season, #167 Dave Allard, the thirty-four year old Ski-Doo racer from Ste.Felicien, Quebec, finished the 2013 season with a second place overall in the National Series. In his first year in the Pro class, #287 Jeff Sanftenberg of Skead, Ontario had an impressive year and managed to put his KK Motorsports/Birch Point Marina Arctic Cat in third overall for the National Series.

The 2012-2013 season wraps up on April 13, 2013 at the JW Marriott in Rosseau, Ontario for the Annual Awards Banquet. In the afternoon it’s all business with a rider’s meeting to discuss changes for the 2014 season. In the evening, the party begins as the top three finishers in each division will be presented with their awards. A special thanks to all of the racers, fans and sponsors for all of your support this season. We look forward to seeing you all again in December, only 246 days to go!