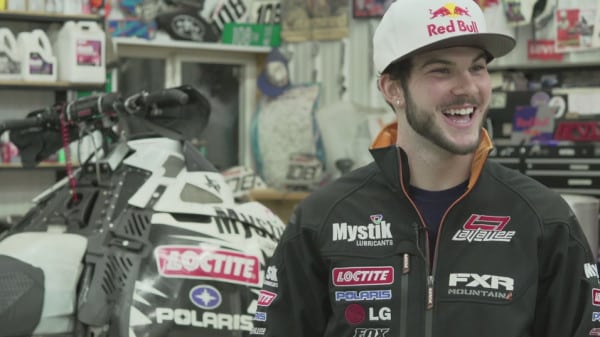 One of the hardest things to do for big name sponsors is to not sign the current hot shots, but to get on the cutting edge and find the “next big thing” before someone else does. This off-season, Red Bull leaned on its current face of the sport, Levi LaVallee, to help them find such a rider and Levi promptly directed them to Scott. Here’s the official release that just came across our screen minutes ago. Congrats Jake!

Team LaVallee’s rookie Pro Rider, Jake Scott has recently signed on with Red Bull Energy Drink. Jake Scott is the second individual snocross racer to earn a partnership with Red Bull, the first snocross athlete signed by Red Bull was fellow Pro rider, Levi LaVallee. With added interest in the snowmobile industry Red Bull, naturally looked to LaVallee for advice on the next name to be signed under the Red Bull brand.

“Red Bull approached me over a year ago about who the next snowmobile Red Bull athlete should be. They wanted the next “big-name” in snocross. Jake showed a lot of progression last season, on and off the track, he was my number one pick. I couldn’t be happier for Jake, Red Bull is an amazing company and being sponsored by them will help Jake on so many levels.” – Levi LaVallee (Co-Owner/Racer, Team LaVallee)

So, how did Jake find out he was now going to be a Red Bull athlete? Levi had a plan. He invited Jake to come over and grab his new FXR race gear and Shoei helmet for the upcoming snocross race. Levi gave Jake his helmet and asked him to open it and see if he liked the paint job. (Crickets) Jake’s, jaw-dropped . . . he didn’t know what to say. After the initial shock wore off, he thanked Levi and couldn’t wait to put on that “athlete only” Red Bull ball cap. I don’t think a smile has worn off his face since. Congratulations Jake!