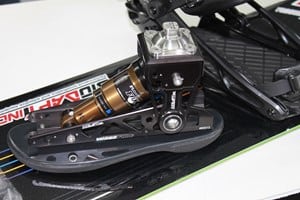 Snocross racer, motocross racer, adaptive athlete, medalist…no matter what you call former national snocross racer who was forced to amputate his left leg above the knee after a tragic racing accident in December of 200, to many of us we simply refer to him as a hero. Since that fateful day, Mike has shown to many of us the face of true determination and in the process developed a breakthrough prosthetic leg and founded the company behind it, Biodapt. Along the way Mike has returned to competition, won countless medals, and now has a new new award to add to his trophy case – the Popular Science Best of What’s New Award. Here’s the official release from FOX Racing Shocks, one of Mike’s primary sponsors and supporters. Congratulations Mike!

FOX is proud to announce that one of its world-class athletes and founder of Biodapt, Mike Schultz, has developed technology that was honored in the 26th annual Popular Science “Best of What’s New” awards issue. The magazine honored Schultz’s Versa Foot, an action sport prosthetic device that relies on a FOX mountain bike air shock for spring return and optimal damping performance. This is the second action sports prosthetic that Schultz and his company Biodapt has created since losing his leg in a 2008 snocross accident—the first was the Moto Knee.

“For more than a quarter century, Popular Science has devoted its December issue to the year’s most remarkable innovations. The Best of What’s New Awards is our magazine’s top honor, and the 100 awardees are selected from a pool of thousands. Each winner is handpicked and revolutionary in it’s own way,” said Cliff Ransom, Executive Editor of Popular Science. “Whether they’re poised to change the world or simply your living room, the Best of What’s New awardees challenge us to the see the future in a new light.”

The Versa Foot uses a uniquely designed linkage and a purpose-tuned, FOX mountain bike air shock to provide the wearer with a precise level of tuning that simply cannot be achieved by other prosthetic feet available on the market. “FOX makes the lightest, most versatile shocks—and having benefitted from them over the years on my mountain bike, snowmobile, motorcycle, truck—and of course, my first product, the Moto Knee—it was a natural progression to make use of FOX’s unparalleled suspension dynamics in developing the Versa Foot,” said Schultz.

“To see Mike and his invention that helps him and others like him to keep doing what they love honored not once, but twice in a single year by the world’s most well-known science and technology publication is simply amazing,” said Dan S. Robbins, FOX’s Corporate Marketing Manager. “We’re so proud of all that Mike has accomplished—from his numerous wins on the race track to the awards and honors he’s received for his inventions to Biodapt, his thriving prosthetics business—and we are proud that FOX and our suspension solutions have been able to play a part in his success.”