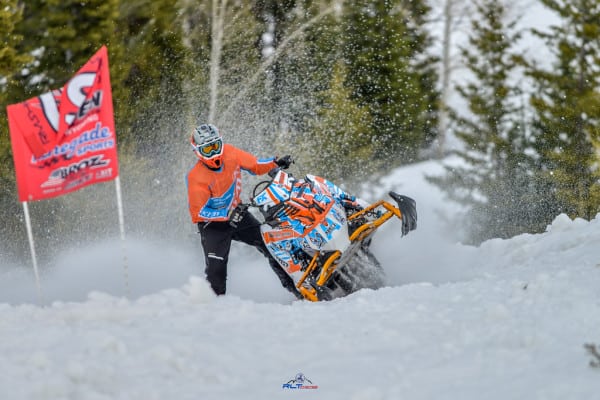 While there was parody at the biggest hillclimb of the season in Jackson Hole, the RMSHA series as a whole as been nothing short of total domination by Polaris rider Keith Curtis. During the Beaver Mountain event in Utah this past weekend, Curtis decimated the competition, winning every class he entered and capturing both the stock and mod King of the Hill titles. Frankly, Keith has been unstoppable and is well on his way to cementing his name as one of the greatest hillclimb racers ever. Here’s the official word from big P on the weekend’s event:

Polaris hillclimbers continue to dominate, led by Keith Curtis, who won five Pro classes and two King of the Hill crowns, at the RMSHA’s Beaver Mountain, Utah hillclimb this past weekend. Polaris racers won nine of 12 Pro classes, every Semi-Pro class and the Women’s class.

Pro racers can enter five classes at each RMSHA event and Curtis won five classes: 600, 800 and 1000 Stock, 800 Mod and Open Mod. He capped off the event by winning both the Stock and Mod King of the Hill titles. In the season’s first six RMSHA events, Curtis has won 23 class titles, 11 King of the Hill crowns and the King of Kings title at the Jackson Hole World Championship.

In Semi-Pro, Polaris Racer Storm Johnson won Stock and Improved Stock and was second in Mod, which was won by Sam Peterson, who went on to win Semi-Pro King of the Hill.

Shelley Heap continued her season-long dominance in the Women’s classes, winning all four races along with the Women’s Queen of the Hill crown for the fifth time in six events this season.

The RMSHA season finale will be held at Grand Targhee, Wyoming, on April 22-23.