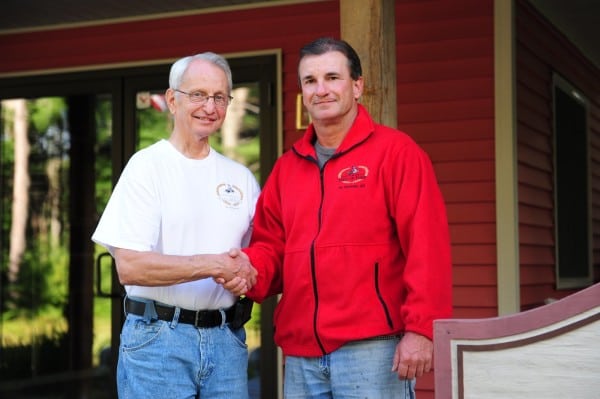 Loren Anderson (left), one of the original founders and president for the past 30-years has retired from the Snowmobile Hall of Fame and long time Ski-doo go fast pilor Craig Marchbank (right) will take over as the new president of prestigious fraternity of snowmobiling history and those who were instrumental throughout its history. Here’s the official release from the SHOF:

The Board of Directors of the Snowmobile Hall of Fame and Museum (SHOF), held their annual summer meeting in the SHOF Ramstad Conference Room Sat, Aug 10, 2013. It was area resident Loren Anderson’s last meeting as President of the non-profit organization, founded in Minocqua in 1981-82.  Loren served as President for over 30 years. The SHOF has operated a HOF and museum for the last 21 years in St. Germain and was in Eagle River and Minocqua for short periods as well.  What began as a trail ride with C J Ramstad the publisher of several snowmobile magazines in the early 80’s, ended up with Loren, local racer and businessman Mike Trapp and Larry Bosacki of the famous Boathouse, deciding they should start a HOF for the spot.  It was one of those moments: “If not us, who. If not now when?”  Thirty years later, some 100 inductees have been enshrined and the organization owns their own land and building on a beautiful wooded campus on St.Germain’s west side on Hwy 70.  The collection of sleds in the museum, is well respected throughout the world as one of the most prized and valuable collections in the sport.   Loren retired from the organization as of the end of the board meeting having seen his dream come true.  Said Loren: “I look forward to spending more time enjoying the Northwood’s, traveling and especially being with my grandkids.  You know they all have had their own sleds from age 5 on.”

Besides serving as leader of the SHOF, Loren managed a career in the building, land development, real estate and design field. He spent some 12 years racing Formula I sleds, owning a race team his son raced on and serving on snowmobile related boards and commissions.  His long and busy career included a stint as Legislative Chair of the Wisconsin Builders Association and a director of the National Association of Home Builders in Washington, DC. Two of the Anderson firms buildings won national design awards from the ARA.  Loren also worked for Gov. Tommy Thompson as an administrator in the Dept of Commerce for 4 years and later at State Fair Park on the board and as race director, where he is one of the people credited for saving racing at the Park and keeping the famous Milwaukee Mile alive, bringing back NASCAR and Indy Car racing.  During these years he also managed to serve as presidents of the Lake Geneva, Minocqua and St. Germain Chambers. He was a founding member and chairman of the Faith Ev. Free Church in Minocqua.  Loren’s wife Carola worked along his side for over 20 years helping as volunteer and office worker.  Until two years ago, the SHOF had no paid employees as all work has been done by volunteers like the Andersons.

The SHOF board had a work day prior to the meeting as they moved some 30 sleds around and made ready for a new and spectacular display of speed sleds including the 3 famous and historical Boss Cats. The SHOF has over 200 sleds available for display but only around 100 are on display at any one time.  The Board members come from as far as Massachusetts, North Carolina, Minnesota, Illinois, Michigan and of course Wisconsin.

Craig Marchbank of New Lennox, Ill and Tomahawk, WI was elected to serve as new president of the Board. Craig has been a life-long sled head and was the longest serving factory driver for ski-doo drag racing efforts, having just retired a few years ago with the most Ski-Doo wins in history.  He also has an extensive vintage sled collection. Craig is a paving contractor.  Tom Otte, of Randolph, MN was elected to fill the remaining term as VP as Jon Carlson, of Mooresville, NC has retired from the board as well.  Tom is a seed farmer and vintage collector, featuring John Deere sleds.  Tom had been a factory racer for Deere in the 70s.

Crag said; “He looks forward to serving and helping the SHOF as it enters its next thirty years, preserving the history and honoring the heroes of the sport.”  Craig reminds everyone that the raffles have started for a beautiful 1978 John Deere Liquifire and a 2014 Arctic Cat so visit our web site for information.  www.snowmobilehalloffame.com  The Hall of fame will be celebrating their 31st annual RIDE WITH THE CHAMPS sponsored by Modine HotDawg Garage Heaters and inductions on February 15, 2014.   The SHOF operates a year around museum on Hwy 70 W in St. Germain, WI.  Hours are 10-5 Thursday- Friday, 10-3, Saturday.