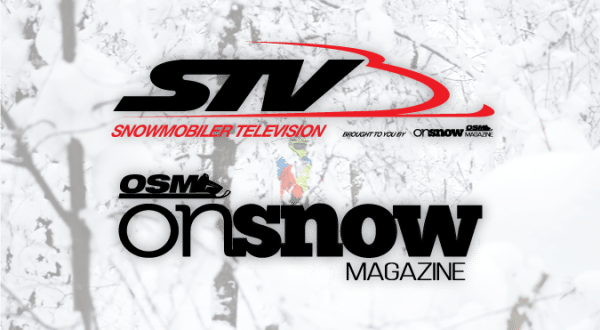 With Unprecedented Growth and Endorsements, On Snow Magazine (OSM) Expands Media Reach with Acquisition of Snowmobiler Television (STV) for the 2016-17 Season

Snowmobiler Television has been a popular program for snowmobile enthusiasts since 1993; delivering a mixture of snowmobile reviews, product evaluations, travel destinations, and industry events. The show is broadcast throughout North America via several local networks including NTV, Global, CTV, CKPG TV, and Wild TV. In addition, the show has a strong presence online with a dedicated website and YouTube channel.

“STV is going to be a great addition to OSM and we couldn’t be more excited, said On Snow Magazine Editor, Pat Bourgeois. “When we relaunched OSM in 2010, we wanted to develop a magazine that broke through the cookie-cutter offerings. Snowmobiling is so much more than just new sled reviews and rehashed press releases…the content is fresh, different, and entertaining and it’s complimented by some of the sport’s best photography and a design that many say is the best in the industry.”

This winter will mark Snowmobiler Television’s 18th season and Phil Molto, with his 30-years of media experience, will return as on-camera host. Phil will be joined by a returning cast of experienced riders along with insights and commentary from Bourgeois and other members of the On Snow Magazine team.

“We’re excited to have Phil join our team and incorporate STV into our business portfolio,” said publisher and show promoter, Richard Kehoe. “It’s a perfect fit, giving us a full arsenal of mediums to satisfy our business partners.”

“I’m thrilled about what the future holds for Snowmobiler Television,” Phil said. “I’ve been reading OSM and attending their show in Toronto since day one. They’re a talented crew…they know sleds, they understand media, and they have tremendous resources. More importantly they bring a fun factor to all aspects of the sport.”

The first episode of Snowmobiler Television is slated to air on December 28th and will deliver an in-depth look at the latest 2017 models. The show will feature 13 episodes in total, each with a distinct theme or destination. Following each airing the show will also be available online through STV, OSM, and YouTube outlets.

“We have a lot of fresh ideas for the show going forward,” said Bourgeois. “Over the course of this season viewers can expect to see a new look and a new direction. Ultimately we want to create a program that brings the same kind of break through content and entertainment that OSM already delivers.”

About On Snow Media

On Snow Magazine (OSM) is the sports only true lifestyle publication that delivers bold, fresh content; stunning production quality; and targets a unique blend of traditional and non-traditional snowmobile enthusiasts. Launched in 1986 in Ontario, Canada, On Snow Magazine has quickly grown into North America’s most influential and premiere international snowmobile publication. On Snow Magazine is published five-times in season in the United States and six-times in season in Canada. Snowmobiler Television (STV) has been bringing Canadian snowmobile enthusiasts news, reviews, and insights of the sport to viewers since 1993. The show delivers 13 episodes to local Canadian networks from British Columbia to Newfoundland as well as online via www.snowmobilertv.com, www.osmmag.com, and complimenting YouTube channels.  To learn more, or to become a part of our marketing voice, contact OSM Publishing at 905-722-6766, toll free at 888-661-7469 or drop them an email at info@osmmag.afsdynamics.com.