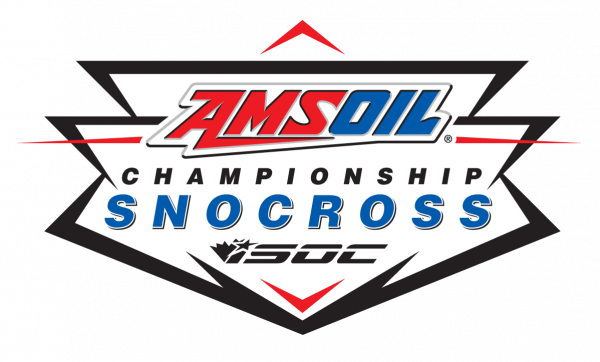 Shakopee, Minn. ~ Any nerves that racers were feeling on the season opener of AMSOIL Championship Snocross on Friday were nowhere to be found for round two on Saturday night at Canterbury Park in Shakopee, Minn.

The weather took a turn for the better, and an icy race surface was tilled to perfection, creating multiple race lines and a night full of passing and bar-to-bar racing action. When the lights were shut off on a spectacular opening weekend, several racers showed newfound speed and promise, and the usual suspects proved their championship credentials.

Ishoel Takes Control After Restart for Second Win in 2022

If there was a defining moment for Elias Ishoel on Saturday night, it likely came on the last lap of the second heat. The defending champ put the throttle down and charged from fourth to second in half a lap. He used straight out speed on the front stretch to catch and pass Trent Wittwer at the line, and while it was only for second, it drew a raucous fist pump from Ishoel.

Pihlaja kept him at bay as Ishoel stalked him for the first five minutes of the race, but an on-track incident involving Hunter Patenaude brought out the red flag and a staggered restart. In the past, Ishoel has taken advantage of these situations, and Saturday night was no different.

Ishoel went for the inside line while Pihlaja went outside. That opened up the door for Ishoel to overtake Pihlaja. It also allowed Polaris’ Emil Harr to push through a tight window and into second. He was followed by Adam Peterson, who also got past Pihlaja,

But out front, Ishoel set the pace for the final five minutes and two laps. With his custom FXR gear unzipped and flapping in sled-induced wind, Ishoel didn’t miss a mark as the Viking Rocket blasted to his second straight win to start the 2022 season.

“It’s always hard when you’re up front in the one, two, or three spots and have everyone lined up tight again,” said Ishoel. “Aki was a little bit in front, and we were going in smart and smooth (off the restart). When you start over it’s 100% again, and you just need to focus on what you can do and pick your lines and be smart.”

Harr put an off-season of hard work, especially on his starts, to good use. He was running in fourth before the restart and the Polaris rider was the main challenger to Ishoel, powering through the rough track to finish second and his second straight podium after finishing third on Friday night in the opener.

“I have been having so much fun on this track,” said Harr. “We had good corner speed the whole weekend, so I don’t know what it was. I just had so much fun, and I think that was the thing tonight.”

Peterson was running third prior to the red flag and was able to get back into that position after the restart. He had a lot of pressure from Pihlaja during the second half of the race but was able to pull away as the closing laps came into play. It marked the first podium finish for the defending Pro Lite champion in the premier class.

“Everybody in this class is just super-fast,” said Peterson. “So, any little bauble makes a difference. I’m just happy to be up here and a big thanks to everyone for helping me get here.”

Pihlaja never dropped below fourth, and Oskar Norum had a tremendous run from the back row to finish fifth.

The past two seasons in Pro Lite have featured extremely deep fields, with multiple winners taking at least one win. In 2021, champion Adam Peterson only brought home two wins. That may not be the case in 2022 thanks to a healthy Jordan Lebel.

Ryley Bester made it through a wave of carnage off the start for the lead, but it was Nick Lorenz who led after the first full lap. The pair of Polaris’ were quickly joined by Friday night’s winner, Jordan Lebel.

Just over two minutes into the race, Lebel made his move, first maneuvering past Bester for second and then a few laps later slipping past Lorenz for the lead. The Ski-Doo rider backed up an impressive opening round win by continuously pounding through the rough, sugary snow on his way to his second straight win.

“I mean, it was a great weekend,” said Lebel. “I couldn’t ask for a better weekend to start the season. My sled was perfect all weekend and everything went great.”

Lorenz had a lot of speed throughout the day on Saturday. He went 3-2 in his heat races and was the fastest sled on the track during his qualifying runs. He was unable to catch Lebel, but no one was able to catch Lorenz either, as he rode across the line in second.

“My team is working really hard,” said Lorenz. “Derek and Dalton and the whole Hemmer family, they’re working their butts off to get me up here. This one means a lot. My dad’s back home with COVID right now. I wish he was here. I love you dad and I hope you’re doing better.”

Bester finally got the good start he was looking for and was able to steer clear of the early race carnage. He found some quick lines late in the race, but was unable to catch Lorenz, ending the night in third and gaining momentum heading into the season.

“All I was just trying to do was focus on that (green) light,” said Bester. “That’s one of the biggest things in this Pro Lite class that started is key, so I was just all focused on that light, and I hit it right on, so it was awesome and who helped you out tonight add remove

Taven Woodie wanted to put the 2021 championship behind her after it was shortened due to injury. But the Arctic Cat rider bounced back from a disappointing season, and a difficult opener that saw her never make it through the first turn, by picking up the Pro Women’s win on Saturday night.

Inanna Hauger nabbed another hole shot, but Woodie worked around the race leader on the third lap and didn’t miss a beat on her way to the win. Hauger kept her speed up and finished second for the second race in a row. Naeli Lebel finished third while defending champion and Friday nights winner Malene Cottew was kicked off her sled and did not finish the race.

One night he was busy slaying kids nearly 15 years younger and the next he was battling it out with the elder statesman of snocross. Either way, it was a successful weekend for Andy Lieders.

Lieders finished second in the Pro Lite class on Friday night, and then went to work on defending his Pro AM Plus 30 championship on Saturday night. Lieders worked his way around Kurt Bauerly for the early lead, and with the knowledge he gained on Friday to cruise to win. Bauerly nabbed the hole shot and settled in behind Lieders as he raced towards a second place finish. Devin Denman crossed the line in third.

PRO SNOWBIKE: Jesse Kirchmeyer is building a new winning streak to start the 2022 season. The Cowboy has been perfect so far this year, winning four straight moto’s on his way to the overall points lead.

After leading the first moto from start-to-finish, Kirchmeyer took an early lead in the moto 2, and despite a late charge from Yanick Boucher was able to sweep the night and take the overall.

Boucher made a late charge on Kirchmeyer in moto 2 that was slowed on the final lap by lapped traffic. But Boucher went 3-2 in the moto’s to finish second overall. Keaton Ward was battling with Kirchmeyer early in the second moto before finishing third to Boucher. His 4-3 moto finishes led to a third overall, just ahead of Troy Hobarty.

SPORT: Adam Ashline almost pushed to a win on Friday night, but the runner-up from the opening round sealed the deal on Saturday night. The Ski-Doo rider got a better start in round two and found the lead for good on the second lap.

Cael Firth set the fastest lap and challenged Ashline for the lead for most of the race before settling into the runner-up spot. Kellen Chapuran was in the mix for a better podium spot, but just missed moving up before finishing third.

SPORT LITE: It was all Cameron Cole in the Stock Lite final on Saturday night. Cole pushed his Polaris to his first win of the season by leading from start-to-finish. William Cote, who finished third on Friday night, picked up his second podium of the year in second. Chance Tietjen started fifth but was able to move into the final podium spot and picked up his first podium of 2022.

CHAMP 120: The Champ 120 champ is back as Avery Hemmer went wire-to-wire for her first win of the 2022 season. Jaxon Houkom kept pace with Hemmer, finishing second. Lila Hemmer started seventh and found the right lines to cross the line in third.

JR 16-17: Jan Even Romsdal found victory lane in the Jr 16-17 class on Saturday. Romsdal led from start to finish, keeping Cade Fleming and Connor Campbell at bay for his first win of the season.

TRANSITION 8-10: Rylan Nelson just missed the podium in round one, but the Transition 8-10 rider moved up one position to the top spot with a strong ride on Saturday. Avery Hemmer finished on the podium in second after placing fourth on Friday night. Ryder Hayes finished third.

STOCK 200: Lincoln Skar made a last lap pass to take the lead and the win in the Stock 200 (6-12) final on Saturday. Tucker Kraling came across in second and Bailey Sheldon finished third.

JR. 14-15: Kenny Goike made it two straight wins in Jr. 14-15. Goike backed up his opening night win by leading every lap on Saturday. Isaac Peterson was the runner-up for the second straight night. Deegan Johnson finished third.

Johnsons’ win in Junior 10-13 saw him take the lead at the midway point of the race and then cruised to his first class win of the year. Kamden Duffy finished second and Colin Taggart crossed the line in third.