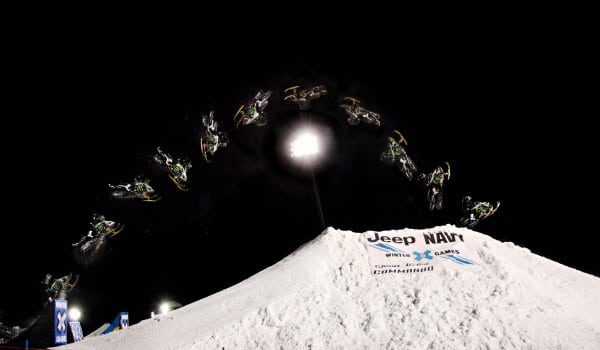 The snowmobile front flip at this year’s ESPN Winter X Games will undoubtedly become synonymous with Middleton, Idaho rider Heath Frisby. While Heath was already regarded as one of the best freestyle riders in sport, with 6 prior X-Games medals to his name, the epic front flip at Winter X 2012, cemented him as one of the best ever and will forever tag him as one of the sports most influential and progressive riders. We caught up to the always smiling Frisby not long after his gold medal performance to find out what was going on inside his head as he stared down the front flip ramp.

You’ve been a competitor at Winter X Games for what 6 years now? You were already regarded as one of the best freestyle riders, what was different about this year? – I think that landing the first front flip on a snowmobile has made me stand out more as an innovative rider. I have always been a top three rider and someone who has been pushing the sport from its conception but this just makes me stand out a little more from the pack.

It seems after Levi nearly stuck the double backflip a few year’s back, or the Moore brothers did their impromptu two-up flip, the scope of X Games changed? – It did change; with double flips and body variables it showed this was no longer a sport for sand baggers. You have to bring everything you can and push the limits of what is comfortable in order to stand out.

How did you come up with the idea of a front flip? – I wanted to win, and I knew a double flip was coming so my trick had to be at least a front flip or some sort of crazy body variable. I’m too fat and too old for a body variable so front flip it was, ha ha!

Did people in the snowmobile community think you were nuts to try it? – I received several comments that I was going to die and this and that. What people don’t understand is we practice the tricks we are attempting for months on end before Winter X. I won’t do anything unless I feel I can land it.

How do you even practice or get your mind in the right place to try such a thing? – Getting my mind in the right place for the front flip was really hard. I was fortunate to have a great bunch of people behind me. Joe Parsons and I trained the entire winter together and I really could not of done it without him and his family’s help. They were there everyday with me all the way till the end.

How long did you work on the front flip? – Joe (Parsons) and I worked on the trick for about two months straight. We had to video every jump, change the ramp, change things on the sled, and change how I positioned by body over and over. It was a lot of hard work.

The chatter just before you attempted the trick was that you had only landed it in a foam pit, and never on snow? – That is true, the big snow landing at X Games was the first time I did the trick to snow. Joe and I decided that it was too dangerous to attempt before. If I tried it before and got hurt I’m just another guy talking about how he wants to do a front flip. If I went to X Games and crashed like Evel Knievel trying it, at least I would get some sort of recognition for the trick.

It sounds like Joe (Parsons) played a huge roll in helping you develop and nail the trick. Who else worked with you behind the scenes to make it happen? – I had the whole Parsons gang with me…Joe, Bailey Parsons (Joe’s wife), Wild Bill and Polly (Joe’s parents), Carl, and other close friends of the Parsons family. I also had my good friend Clow, my fiancé Linnae, and my entire family there offering support. It was really nice having everyone around me while working on this trick. I couldn’t have done it without them. Plus the guys at Monster, Ski-doo, and Slednecks were always there behind the scenes too.

I think for most of us, we would have hit the brakes before even getting close to the ramp, no matter how much we practiced the trick in a foam pit. What goes through your mind before you hit the ramp, and how do you keep your emotions in check? – It’s really emotional and sometimes overwhelming, you try to focus and you try to just remember your training, it’s all you have and you have to believe in it or you will crash.

Landing that trick at Winter X must of changed things for you considerably since Winter X? – It really hasn’t considerably changed anything. I still have the same great sponsors and friends around me and we will continue to push the sport together and have fun doing it.

What’s next for Heath Frisby? – I’m not sure. You will just have to wait and see.