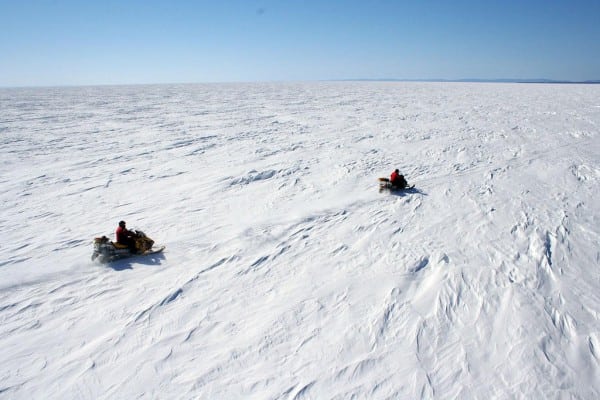 The boys and girls from Valcourt are beaming this week as the official results from one of the most grueling snowmobile races in the world – Cain’s Quest – are in and Ski-Doo riders Jean-Guy AuCoin and Steve Girard stood tall after the 1,500 cross-country journey. The official gushing release from the pen of Ski-Doo follows:

Riders BRP’s Ski-Doo team of Jean-Guy AuCoin and Steve Girard won this year’s Cain’s Quest, making it the third year in a row Ski-Doo X-Team riders have captured the top spot. In just its seventh year, Cain’s Quest has quickly become one of the most coveted and grueling events in snowmobile racing.

Cain’s Quest features 1500-miles (2414 km) of racing across some of the most brutal and unforgiving terrain in North America. It is considered one of the most challenging snowmobile races on the planet, testing a man’s endurance, navigational, winter, and sometimes mechanical skills, plus it requires a snowmobile that can traverse any kind of terrain; from deep snow to ice and back again, while maintaining speed, fuel economy and dependability.

Excellent snow conditions made this year’s Cain’s Quest one of the most daunting to date. Two-rider teams set out from Labrador City, NL, and rode a 1500-mile loop battling through ice fields, deep snow, mental and physical fatigue and mechanical challenges along the way. Team 25 of AuCoin and Girard led the field of finishers into Labrador City on March 22, crossing the finish line at 9:21AM, 39-minutes ahead of the second place team. After them came the Ski-Doo riders of Team 29 (Mark Nui/Joachim Nui) in third place and Ski-Doo riders of Team 26 (Lucy/Flowers) in fourth place. In all, Ski-Doo teams claimed three of the Top 4 finishing spots in the race.

AuCoin and Girard chose Summit Freeride models because of their racing pedigree. The Freeride models share the reinforced REV XP RS chassis, racing brake and shocks of the Ski-Doo MX Zx 600RS snocross race sled, but with a longer track and rising rate SC-5M2 rear suspension. It is built for deep snow like a Summit model, but with a wider front suspension and racing shocks, it can handle the demands of a cross-country race like Cain’s. Powered by the Rotax E-TEC 800R engine, it posts superior fuel economy and oil consumption numbers while making a class-leading 163 horsepower.

“The Summit Freeride with the Rotax 800R E-TEC engine definitely gave us the advantage at this year’s Cain’s Quest,” said Steve Girard from Team 25. “And it wasn’t just us, 8 of the 14 finishers were on Ski-Doo Freeride sleds. I think that’s proof that if you want to finish Cain’s Quest and win, you better be on a Ski-Doo.”