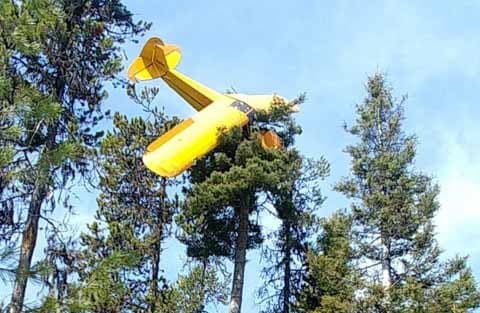 There are many reason that we can tell you why you should ride with a SPOT satellite messenger but why listen to us when you can listen to John Gregory’s story. It was Tuesday April 23, 2019 and the 79 year old; John Gregory was flying out of his ranch near Challis, Idaho when something went wrong. Trying to make it to the nearest airport in McCall he crashed. When asked about the situation John was quoted, “The engine quit, and I ended up in a tree. By the grace of God, I didn’t fall out of it.”

When the plane came to a stop a top of a 60-foot tree, John activated the S.O.S. button on his SPOT Gen 3 device. It took responders about 2 hours to get to the remote scene.
where Captain Jason Speer with the Valley County Sheriff’s Office commented, “This rescue was aided with the SPOT device. The EPIRB (Emergency Position Indicating Radio beacon) put the crash 4 miles away, but the SPOT was right on the money. This was the most extreme recovery I have seen in 25 years of law enforcement service.”

With the help of a harness, rescue crews were able to extract John from the plane and rappel him to safety, he was taken to the hospital as a precaution but was cleared with no serious medical issues, where he was quoted, “I’m glad I had it. I use it every day anyway. I can’t think of a better device.”

We can’t think of why everyone doesn’t travel with a SPOT! www.FindMeSPOT.ca/OSM