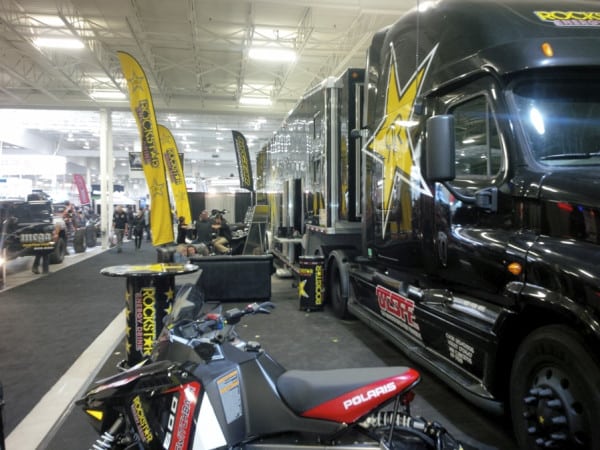 The biggest indoor snowmobile show on the planet (Toronto International Snowmobile, ATV, and Powersports Show) didn’t disappoint this year, serving as a who’s who for the entire industry. The professional racing scene was well represented, most prominently by the Team Rockstar Energy Polaris Racing crew. Here’s a recap from the team:

“It was really nice to see everybody and it almost reminded me that the snowcross season is just around the corner. The snowmobile show is sort of a reality check for us. It sets the stage for us, gets us thinking snow and getting back into action,” multi-time National Champion Hayden said.

The Toronto Snowmobile Show, the largest of its kind in the world, was the first major public showing of the 2015 Polaris 600 IQ snowmobile, the same model the factory team will use to campaign the CSRA National Championship in Canada and selected ISOC World Championship rounds in the United States.

“The Toronto Snowmobile Show is probably the most relaxed environment that we can meet anybody and everybody before we get down to the business of racing,” Laurin said. “We were very pleased with the turnout and the interest people showed in the team and the Polaris sleds. It definitely gets us in the racing mood.”

In addition to mixing with racing fans and snowmobile enthusiasts, Laurin sat down and socialized, if not talk shop, with representatives of most of the team’s sponsors, who were also in attendance at the show with their own booths.

Adding a little music to the proceedings was country singer Larry Berrio, himself a snowmobile enthusiast and friend of the team. Berrio stopped by to sing some tunes for visitors to the Rockstar Energy Polaris Racing booth and, of course, talk snowmobiles.

With the rapidly approaching Canadian racing season, which kicks off December 12-14 at Searchmont Resort, in Sault Ste Marie, ON, Team Rockstar Energy Polaris Racing will start testing and fine-tuning the IQ racing sleds in mid November and attend the first ISOC race of the season in Duluth, MN on November 28-30.