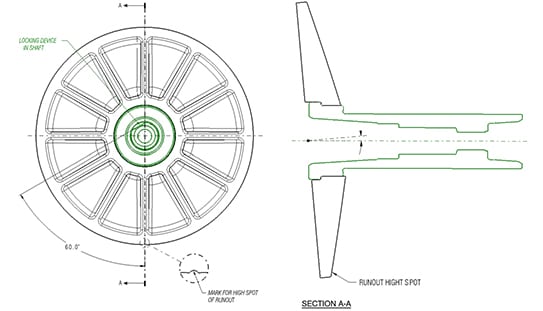 We couldn’t help but chuckle a little after reading the press release from Ski-Doo that hit our inbox late last night. The release reveals a new vibration damping clutch technology that has been lurking within all Gen4 850 snowmobiles since their introduction a year ago. The patent pending technology features a counterbalancing pDrive fixed clutch sheave. What made us laugh is we recently watched a video on social media of a “performance shop” that had discovered “the hot set-up” for 850 owners. What they had actually found was the slight offset built into the clutch sheave that is perfectly timed with the engine’s firing to create a counterbalancing effect thereby reducing vibrations. Instead the performance shop deemed this off-set as a “serious” engineering and manufacturing flaw and was offering a service to machine and “true” the fixed sheave for improved performance. Here’s the official release from Ski-Doo along with a few illustrations on how the technology works.

Since the launch of the REV Gen 4 platform, BRP has been using a Patent Pending technology on the pDrive clutch to minimize engine vibration. This unique new solution adds no weight but solves the vibration issue many large displacement two-cylinder snowmobile engines experience.

Those with a keen technical eye will notice the D-Shaped crankshaft alignment and the twenty four thousandths (.024) of an inch (.6mm) precise offset or runout built into the clutch sheave. This runout keeps the belt more perfectly tensioned within the primary and secondary clutches to reduce vibrations sent into the chassis through the secondary clutch. The timing of the runout’s high spot meeting the belt is synchronized with the engine’s firing to offer a counterbalancing effect without added weight or complexity. The net result is less vibration transferred into the chassis and the rider.

Because of reduced vibration transferred to the belt, the belt temperature remains stable or even cooler, compared to not having this runout.