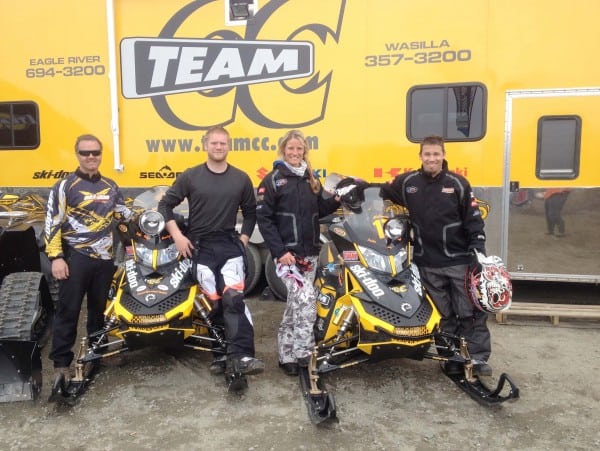 The big year-end bash on snow held in the Alaska back-country better known as the Arctic Man, saw a sweep by team Ski-Doo racers and their skiing partners this past April. The unusual competition combines snowmobiles and downhill skiing into a single 5-mile race that includes a stretch where the skier is pulled by the snowmobile at ridiculous speeds. The yellow gang was feeling smug at the close of this year’s event, as their crew took home top honors in the premier classes. Here’s their official take:

Alaska’s HooDoo Mountains play host to the annual Arctic Man competition that consists of a skier or snowboarder teamed with a snowmobile rider. There are three parts to the run: a 1.75-mile downhill, a 2.25-mile snowmobile pull and another 1.75-mile downhill run to the finish line. The pairs must work as a team as the snowmobile rider hands off the tow rope to their partner for what can be a blazing fast pull if the team coordinates their run well.

Aklestad also won the (Snow) Board competition with partner Nate Holland clocking a winning time of 4-minutes, 47.92-seconds and logged a top speed of 75.7MPH. Ski-Doo rider Tyson Johnson backed up Aklestad in both events with his Ski partner Scott Montalbo and Board partner Jayson Hale. Julie Thul pulled Anna Goodman to the win in Women’s Ski division with a time of 4-minutes, 14.47-seconds and another impressive top speed of 80MPH.

Aklestad, who hails from Palmer, Alaska, is a veteran cross-country racer and normally competes in much longer events on his Ski-Doo MX Z X RS snowmobile than the Arctic Man including the grueling 2000-mile Iron Dog. Sullivan, who hails from Truckee, Calif., is a World Cup downhill skier. Combine Aklestad’s terrain racing ability with Sullivan’s World Cup skiing experience and you get an event-winning time of 4 minutes, 4.80-seconds and a top speed of 80.6MPH.