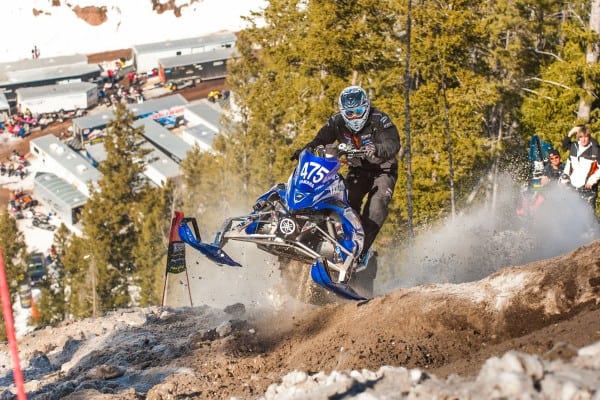 The blue crew has been breathing some rarefied air, at least when it comes to their own personal record books in RMSHA hill climb competition. At the final RMSHA event of the season, Yamaha pilot Cable Willford put Yamaha  on the podium, a first for a four-stroke, and a celebratory achievement for Yamaha in general. Here is their official take on the weekend:

PLEASANT PRAIRIE, WI— Aboard an FX Nytro MTX, Cable Willford became the first person in history to race a four-stroke snowmobile to a podium finish in RMSHA hillclimb competition at Schweitzer Mountain Resort in Sandpoint, Idaho on Saturday, April 14. With a blazing run of 1 min. 2.937 sec., Willford topped six other pro drivers for the position while also giving Yamaha its first RMSHA podium in recent years. Adding to the laurels, Willford and teammate Kody Malmborg both put their Yamahas into the finals in a total of seven different classes on Saturday, ultimately earning three additional top-five finishes along the way. Simply put, the season-ender in Idaho was Yamaha’s strongest and most dramatic hillclimb showing this year, serving notice that its four-stroke snowmobile technology can match the best competing two-strokes.

At about a quarter-mile long with 500 feet of vertical gain, the run at Schweitzer Mountain was shorter than some hillclimbs, but it made up for this with a series of technical challenges including tight hairpin turns through the trees and lift towers. Mastering these rapid-fire challenges required equal measures of power and handling, along with a boondocking-style technique that rewarded driver skill. Fortunately weather conditions were terrific, with sunny skies for much of the weekend and well-packed snow that held up well. Willford and Malmborg both rose to the challenge on Friday, each qualifying their FX Nytro MTXs in five classes, the maximum number allowable, for the first time this season.

RMSHA racing is perhaps the most concentrated form of snowmobile competition, in that drivers get only one chance to qualify and then a single final run – that’s it. When Willford lined his FX Nytro MTX up for the 600 Mod final, two racers had already run up the mountain and put good times on the clock. So he knew had to run hard and fast – with no mistakes – the entire way up. But Willford had a few tricks up his sleeve, starting with the 1049cc four-stroke Yamaha engine, which launched his sled out of the starting trench like a Top-Fuel dragster. He then jumped the course’s one downhill section, which many drivers simply rolled, picking up more time. From there on, Willford blasted through the corners and maintained as much speed as he could on his way up the mountain, setting the third-fastest time in class to earn the historic podium.

“After my run we had some tense moments waiting for the other racers to make their runs up the hill, and we had a giant celebration when my time held up,” Willford said. “It was a very rewarding moment and it put the competition on notice that we are here and getting better. This is definitely a building block to competing for overall wins.”

Yamaha’s Eric Josephsen added, “Our goal the whole year was to put both Cable and Kody in the finals. We knew that Yamaha’s four-stroke machines are capable, and we’re really happy with the way things turned out. Congratulations to the whole team, including Cable, Kody and our semi-pro rider Kolton Malmborg, our crew chief “Big Kody” and Troy Johnson, who maintained and tuned Cable’s machine.”