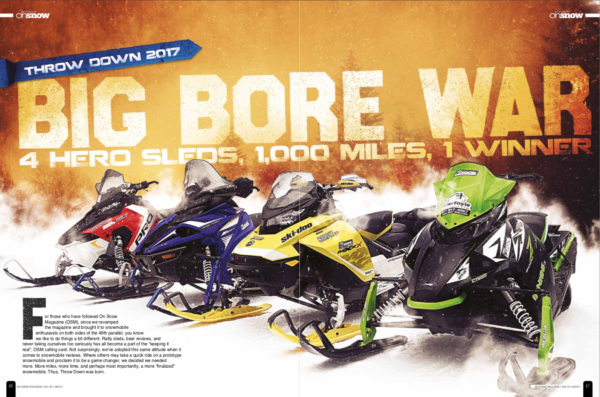 For those who have followed On Snow Magazine (OSM), since we revamped the magazine and brought it to snowmobile enthusiasts on both sides of the 49th parallel, you know we like to do things a bit different. Ratty sleds, beer reviews, and never taking ourselves too seriously has all become a part of the “keeping it real”, OSM calling card. Not surprisingly, we’ve adopted this same attitude when it comes to snowmobile reviews. Where others may take a quick ride on a prototype snowmobile and proclaim it to be a game changer, we decided we needed more. More miles, more time, and perhaps most importantly, a more “finalized” snowmobile. Thus, Throw Down was born.

Just as we have in previous years, Throw Down compares true production snowmobiles, not prototypes, and does so by racking up real trail miles (and lots of them). However, due to the seasonality of our sport, this approach means we must compare the current model year sleds. While not ideal, we also know you don’t need your information spoon fed. You can draw your own conclusions on future model year sleds by digesting the feedback we provide from the previous year’s sleds. 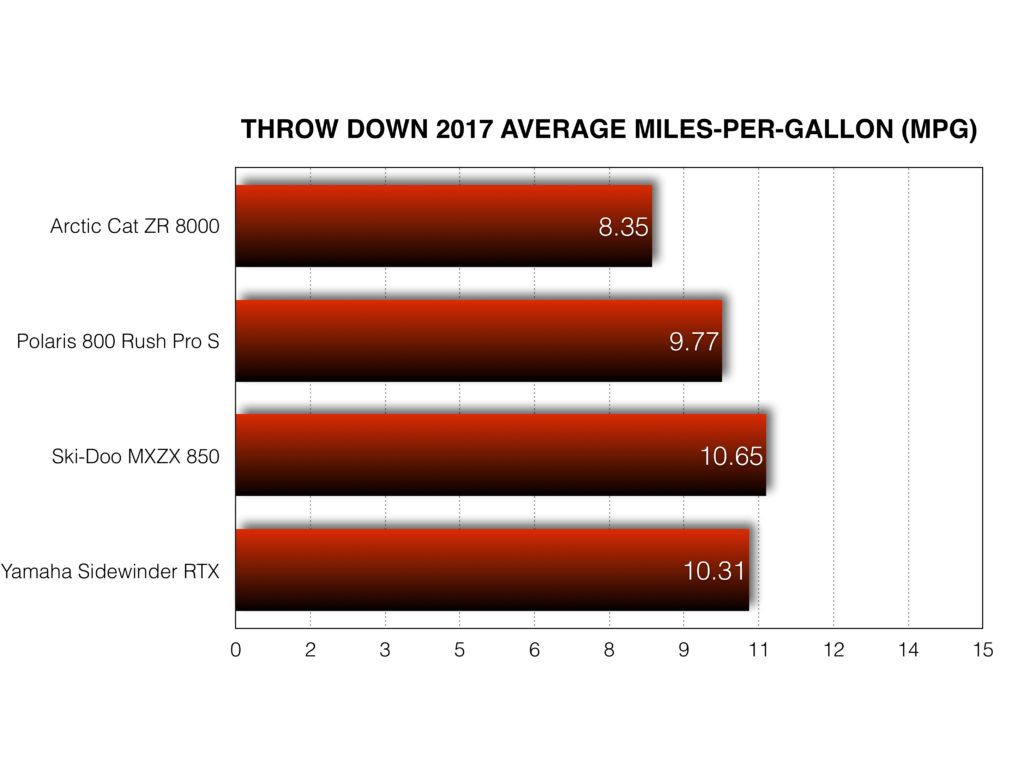 For this go around, we gathered together the cream of the crop trail sleds from 2017. The Yamaha RTX, Ski-Doo MXZX, and Polaris Rush XCR, each represented the very best trail bangers of their respective brand. But with Arctic Cat pulling the sheets off their long-awaited new 800 CTEC-2 engine by mid-season last year, we felt it only fair and fitting to include the early release 2018 ZR 8000 into the mix. After all, it was a true production snowmobile, and with it, all four brands were represented by their biggest and best engine packages.

With our buggies fueled, prepped and ready to roll, we headed east…way east, to some of the best trails in North America. For the better part of week, we racked up nearly 1,000 miles hammering the trails of New Brunswick and Quebec. When the final mile was logged and the sleds loaded up, we logged our thoughts, ranked the attributes, and crunched the numbers of each sled.

What we learned is that this crop of buggies are good, really good. In fact, the top three sleds were separated by just three points, and while the Yamaha finished a few points further back, if you could scrub 20-pounds from the Sidewinder, we suspect the final tally would be much closer. For certain there are winners and losers, but when you dig deeper into the attributes, and factor in personal preference, additional set-up, and riding style, separation is little more than a coin flip. 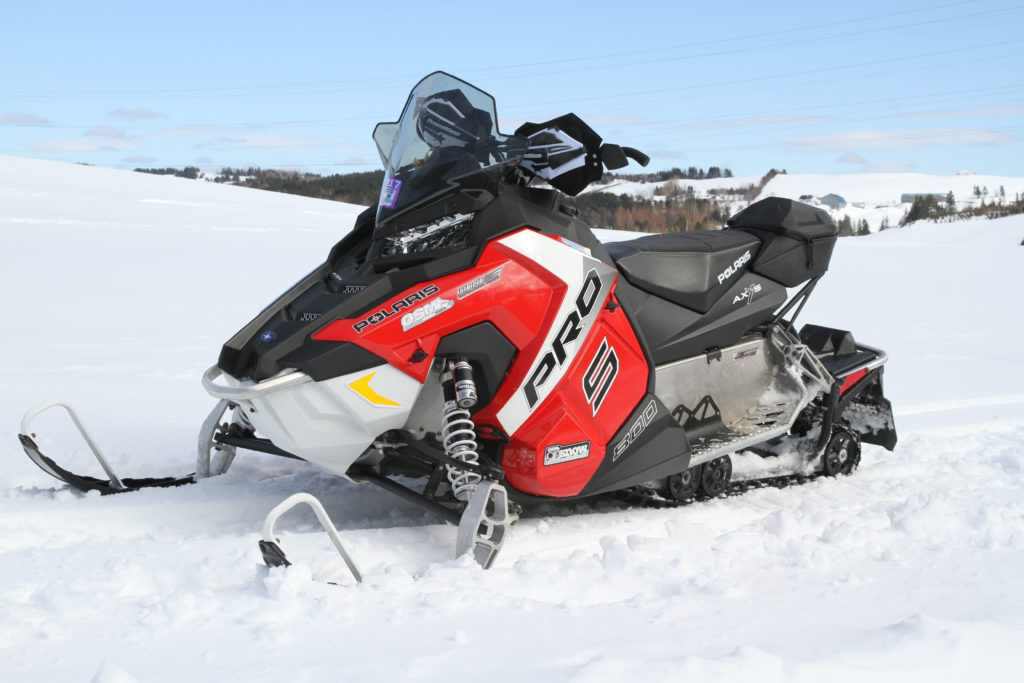 The 800 Rush Pro-S is a great trail burner! It feels light and nimble, and when the trail gets twisted, this sled feels perfectly at home. Body positioning plays a big role in the handling equation. One you and the Rush are on the same page, it delivers razor blade control. Shock set-up and spring rates are geared more towards smooth trail applications. Keep the flipper below jail-time speeds and you’ll be fine. Failure to do so will cause the Rush to lose its composure, and send a spine-tingling wakeup call straight to your brain. – Dan Skallet 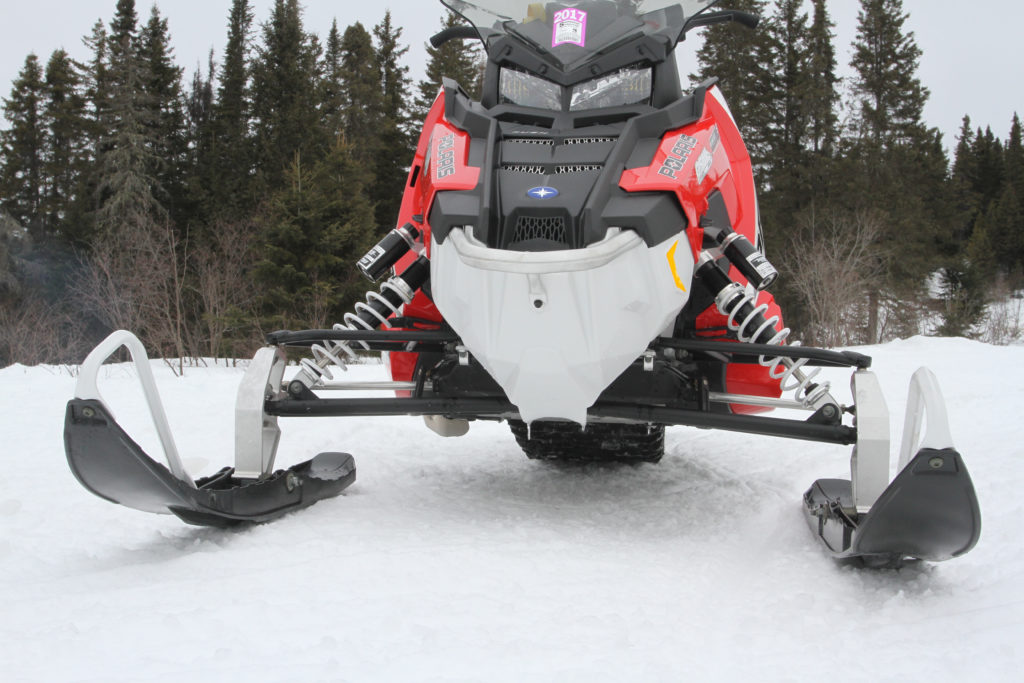 Sporting the only 121-inch track in the group, the Rush had a clear advantage when rallying tight corners, making it my favorite sled for the always twisting trails of Quebec. Throughout the day we would trade machines, and every time I got on the Rush, the fun meter spiked. The sled corners flat, handles with precision, and romps through whooped out trails with confidence. The power and acceleration of the 800 HO was always there, and the advantageous power-to-weight ratio of the Rush ensured you could feel it on every straightaway. Once you throw a leg over the Rush, you never want to get off. – Logan Gamble 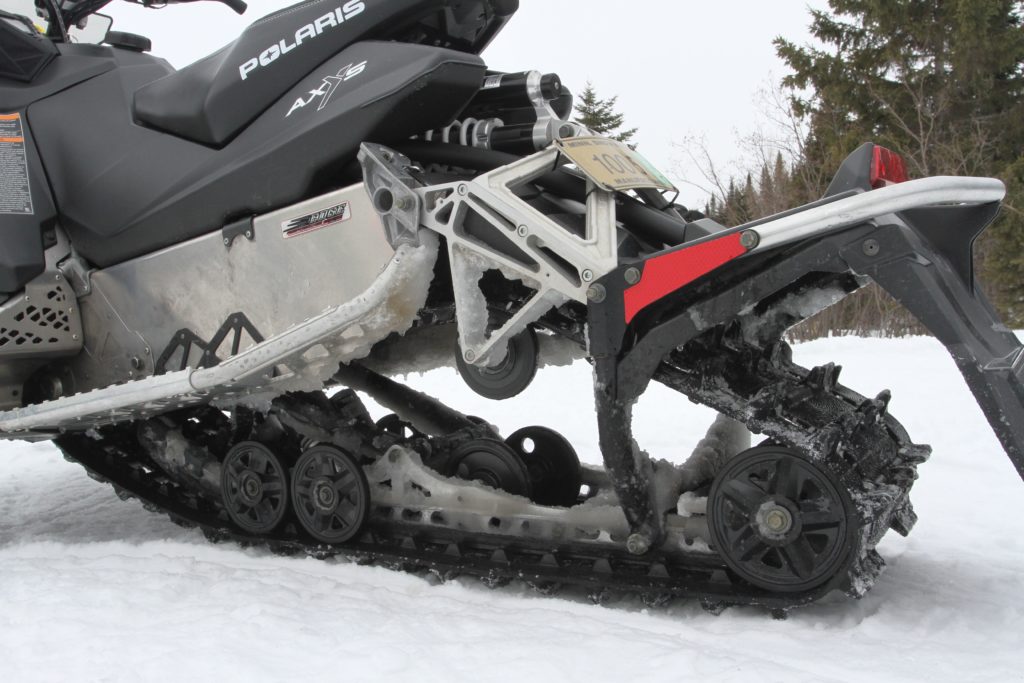 Much like the original Indy, the Polaris AXYS chassis has become the poster child of how a sled is supposed to “feel” from the saddle. I was an outspoken critic of the original outside the tunnel design of the first Pro-Ride. In fact, there was a time when the original Rush would have a hard time claiming fourth place in a four-horse handling race in my book. But the newer AXYS design combined with year-over-year refinement has transformed the demeanor of the Rush into one of predictable confidence. While I wouldn’t call it “on rails”, its damn close. Once you get accustomed to its rider active design, you can pick your line and hold it.  Until you do however, the sled’s playfulness can at times be mistaken for a lack of stability. With light steering effort, just right turn-in, you simply feel connected to the trail with the Rush. While the rear suspension can still be one-dimensional at times, and long-distance comfort is lacking, there’s no denying the smile this sled puts on your face, every time you ride it. – Pat Bourgeois 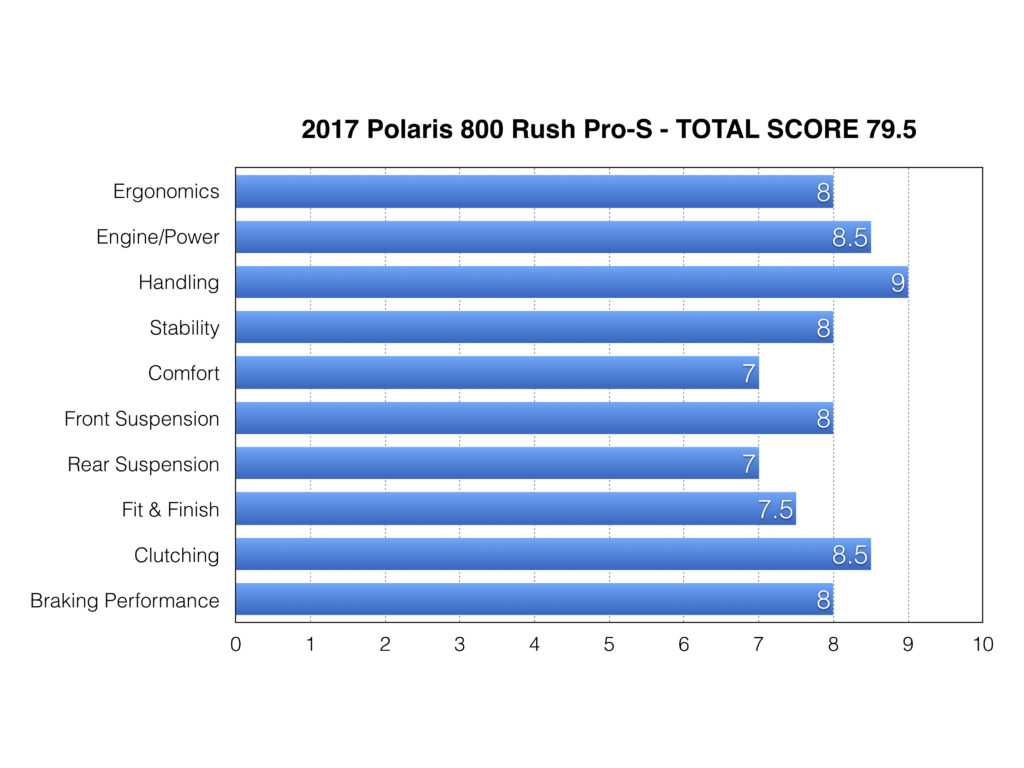 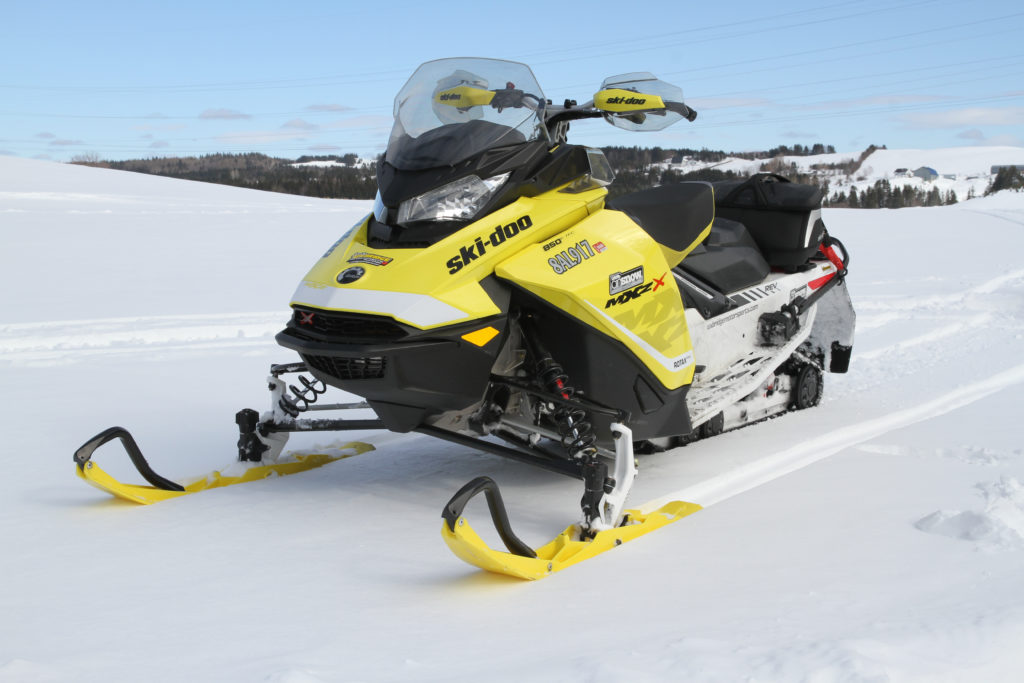 Just when you think they can’t make the REV any better, they give us the new GEN4. An absolute blast to ride, the new 850 motor puts a smile on your face with every throttle grab. With optional Quick Adjust running board mounted adjusters and adjustable Pilot skis, you simply set it and forget it. In fact, the only thing missing was more adjustment capabilities for the front suspension. Of course, Ski-Doo nails the fit and finish, they are the kings of this domain. Give me a bigger display screen for my aging eyes and I’d have a hard time finding any faults with the new yellow rocket. – Dan Skallet 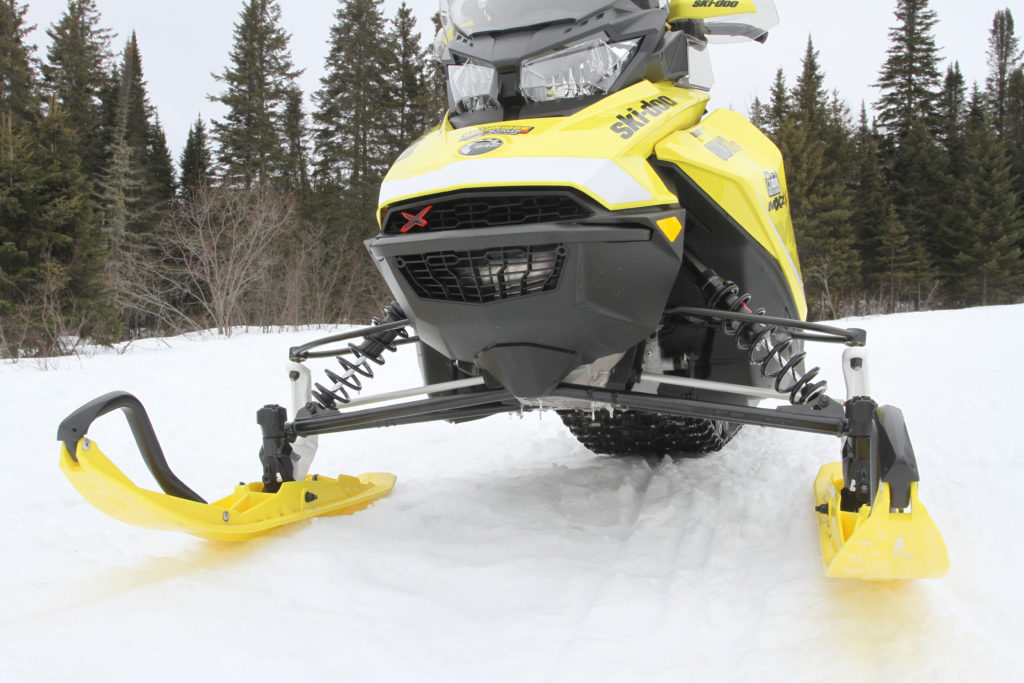 Back in the day, I owned the snowmobile that many now point to as having changed the industry. I can remember how excited I was to ride my 2003 MXZ 800 REV, and I can honestly say I’m equally as excited to ride the newest one too. The GEN4 850 is in a category all its own with its 850 E-TEC engine, narrowed seating position, and head-turner styling. The open toe-hold caught me off-guard and forced me to change my riding style. While it might be a benefit off-trail, I’ll take it closed for the trails. The upgraded RAS3 suspension and its extra inch of travel made a significant difference in the bumps, and I found myself pushing harder in these situations instead of letting off. If this is just the tip of the GEN4 iceberg, I can’t wait to see what is coming next. – Logan Gamble 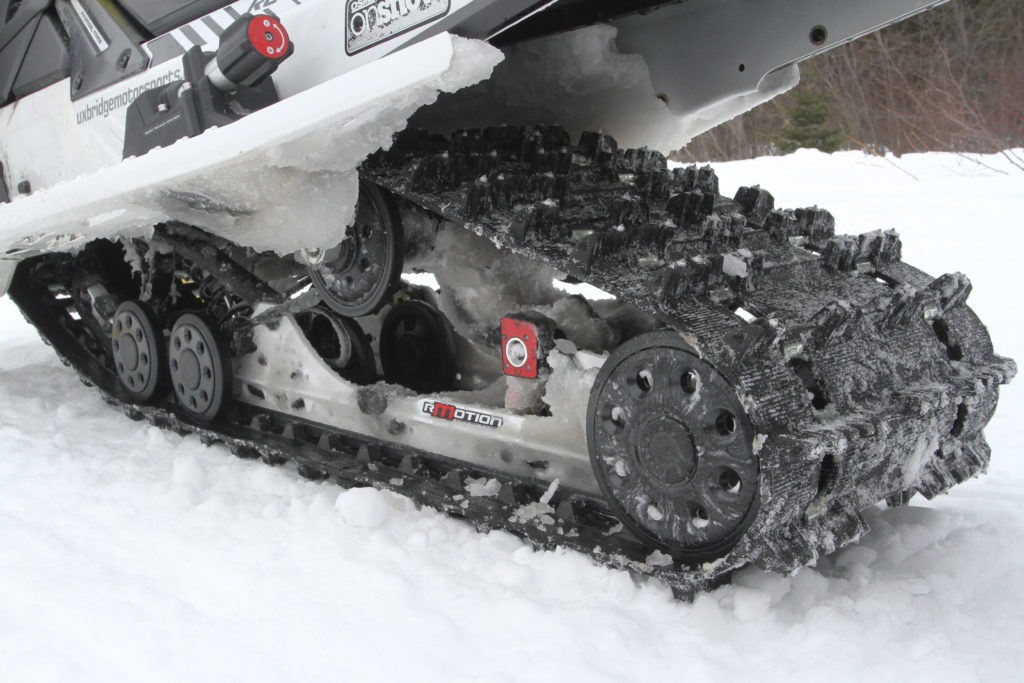 I remember how awkward I felt when I experienced the original REV for the first time. The unusual seating position forced me to change how I rode, and it wasn’t until my third day of riding did the light bulb finally come on. Obviously, it did for a lot of other people as well. While the new GEN4 REV doesn’t represent the same kind of dramatic change, it is yet another step in the continual evolution of the REV platform. The narrowed cockpit, further forward rider position, and overall more rider active design makes this the most “playful” REV yet. But despite all of these positive traits, the new GEN4 set-up seems to have lost some of the precision I loved from previous REV platforms. Light, agile, and easy steering effort all give the MXZ positive marks, but a hint of vague push in the corners keeps it from being a home run. The new 850 second generation E-TEC is so pure and technical, in some ways it lacks character. A jerky transition point just off idle needs refinement, and I never felt the big 850 pulled as hard as it should have, or overachieved on the big end as I had hoped. – Pat Bourgeois 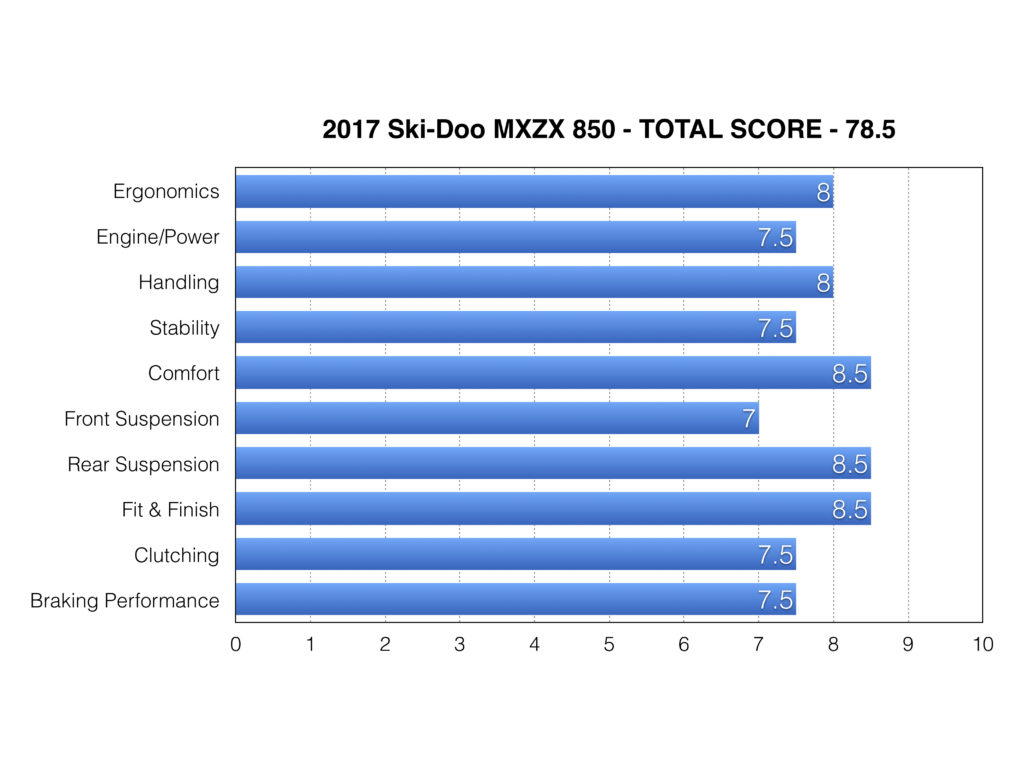 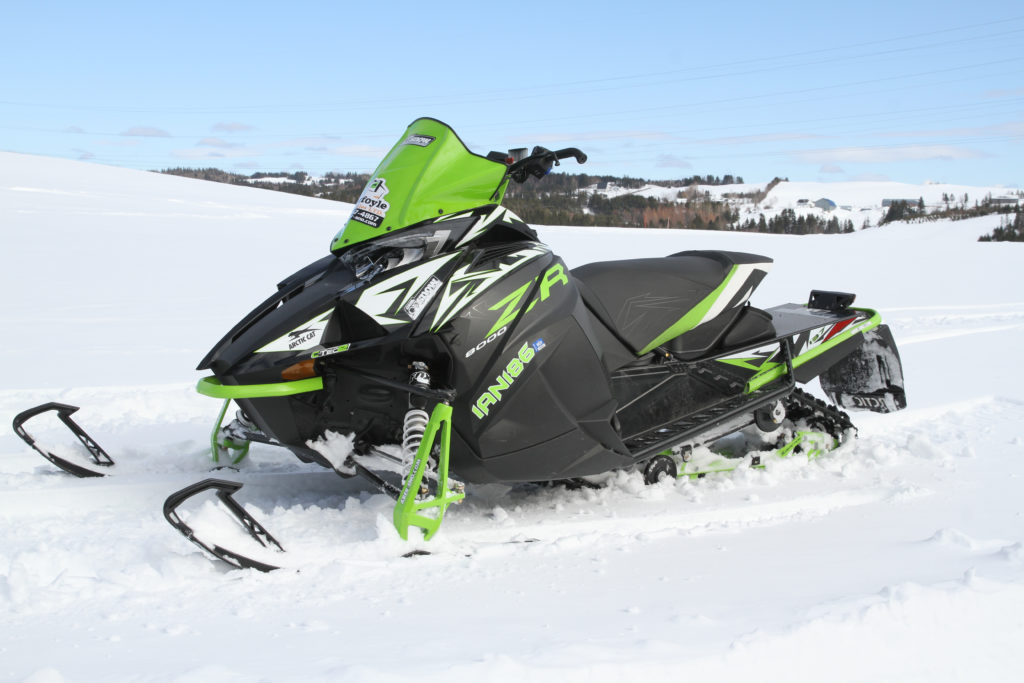 There’s a lot that’s right with the Cat – super-light steering effort gives you all-day ride and comfort; the seating relationship, handlebar bend, and grip size remain my favorite for comfort and control; and the longer track of the 137-inch set-up allows you to hold a line while hot on the throttle that the other sleds simply can’t match. – Dan Skallet 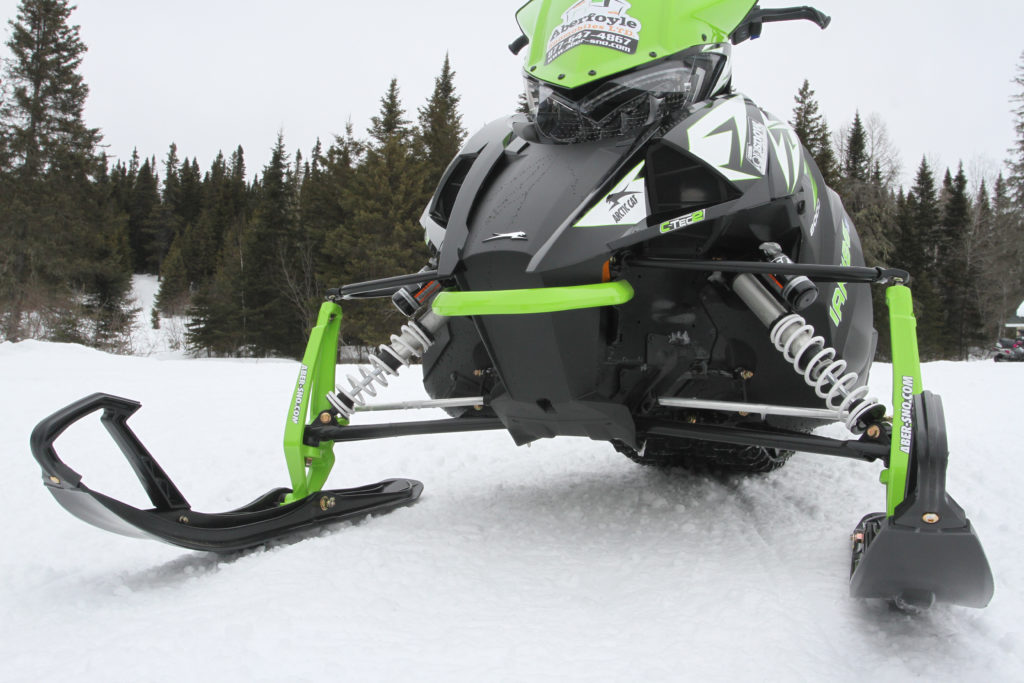 Throughout the season, our Toronto office had a 2017 XF8000 at our disposal. I spent a lot of time on that sled, and it made the transition to the new 800 CTEC-2 powered ZR that much more eye-opening. Everything seemed better…way better; clutching, throttle response, acceleration, the new ZR 8000 felt like a completely different sled. The get-up-and-go from this sled felt like it was completely off the charts, and it begged to be hammered down on the long straights. The engine delivers in every key category, and TEAM Rapid Response clutching keeps the power delivery exactly where it should be, no matter the situation. – Logan Gamble 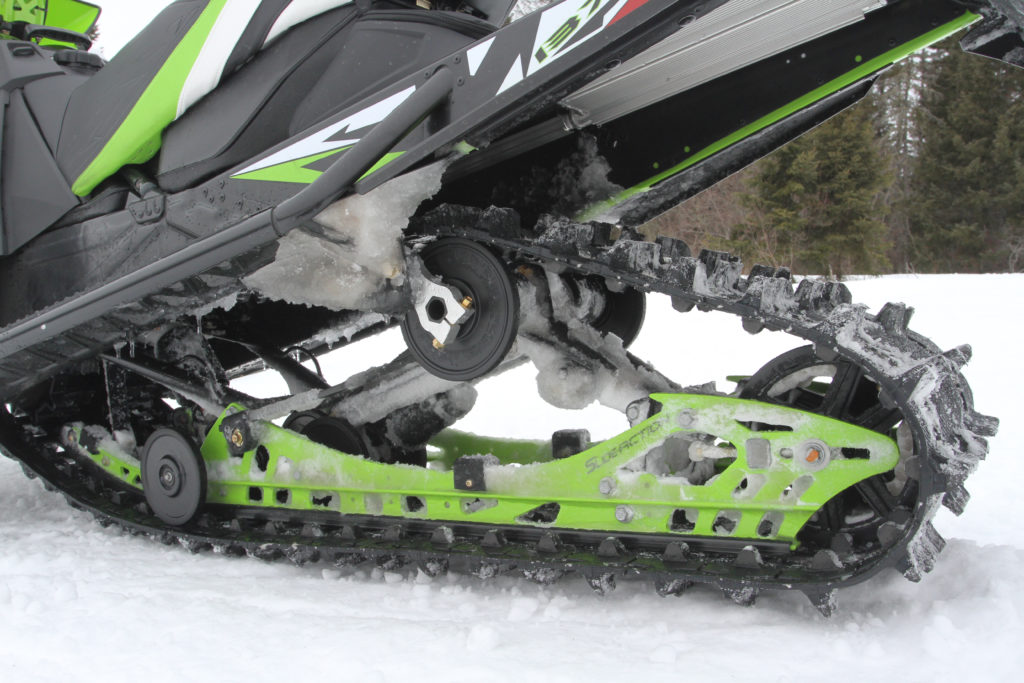 With the addition of the new CTEC-2 800 engine to the ProCross platform, the new ZR is without question, the most complete Arctic Cat ever. The sled’s consistent scores in every category illustrate this coveted quality, and while we were never “wowed” by the ZR, we all agreed the sled constantly exceeded expectations. For certain, the new 800 motor is a ripper. For year-one effort, I was blown away with the engine’s run quality, performance, and shredder power. The ZR is balanced and predictable, and exudes a feeling of security and a do no wrong attitude that others can’t match. Much like the entire feel of the ZR, it’s hard to find fault with the suspension at both ends. The race proven design will tame any terrain, and never turn against you. In fact, too many will overlook the ZR rear suspension for something more sexy…big mistake. – Pat Bourgeois 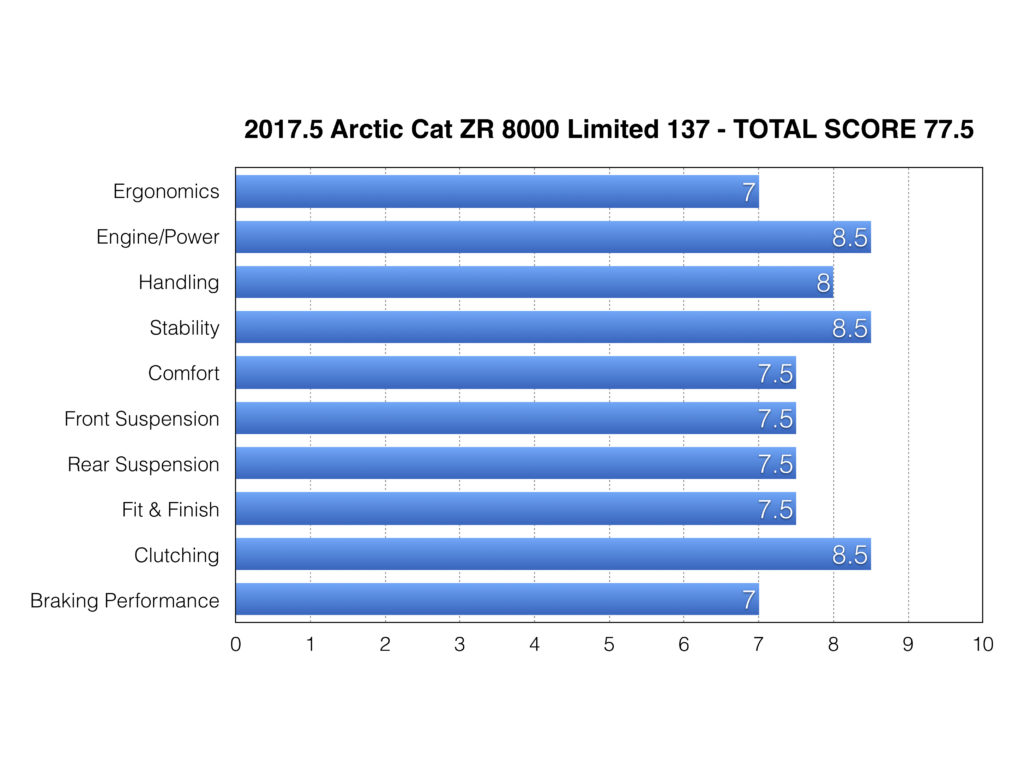 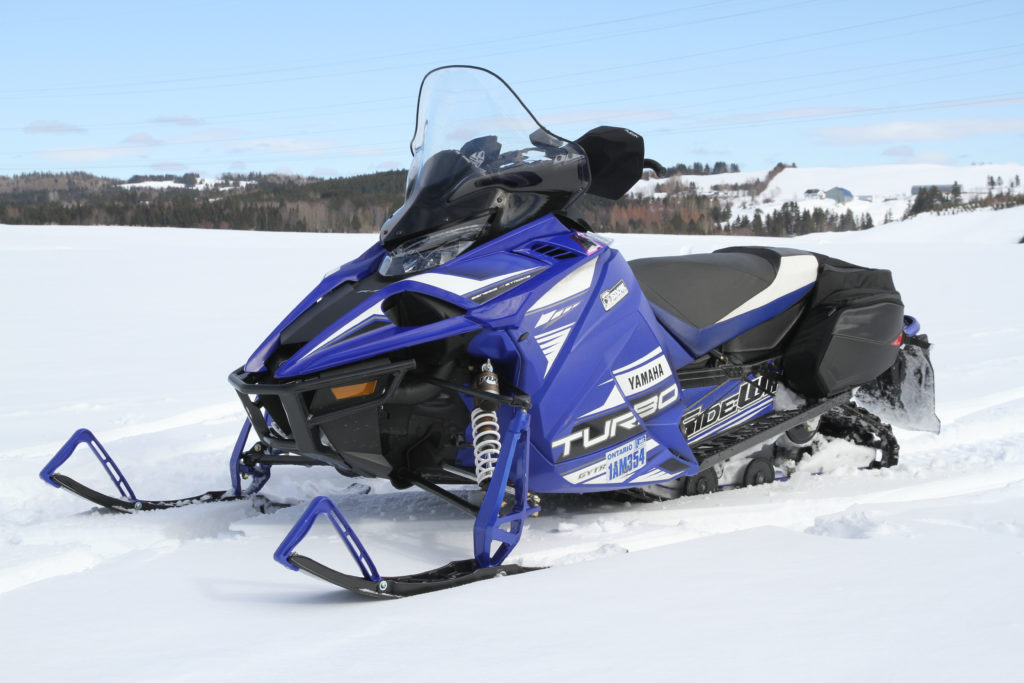 The Sidewinder is a rocket ship! The factory turbo equipped sled has the ability to instantly clean-out and polish any corner on any trail with the simple snap of the throttle. The nearly 200-horsepower musical playing under the hood delivers near ludicrous speed in seconds. It’s stupid fast and its feels stupid good. Still, with all this power on tap, and some extra pounds under the hood, coming in “hot” is an all too common and scary occurrence that you’ll quickly learn not to repeat. – Dan Skallet 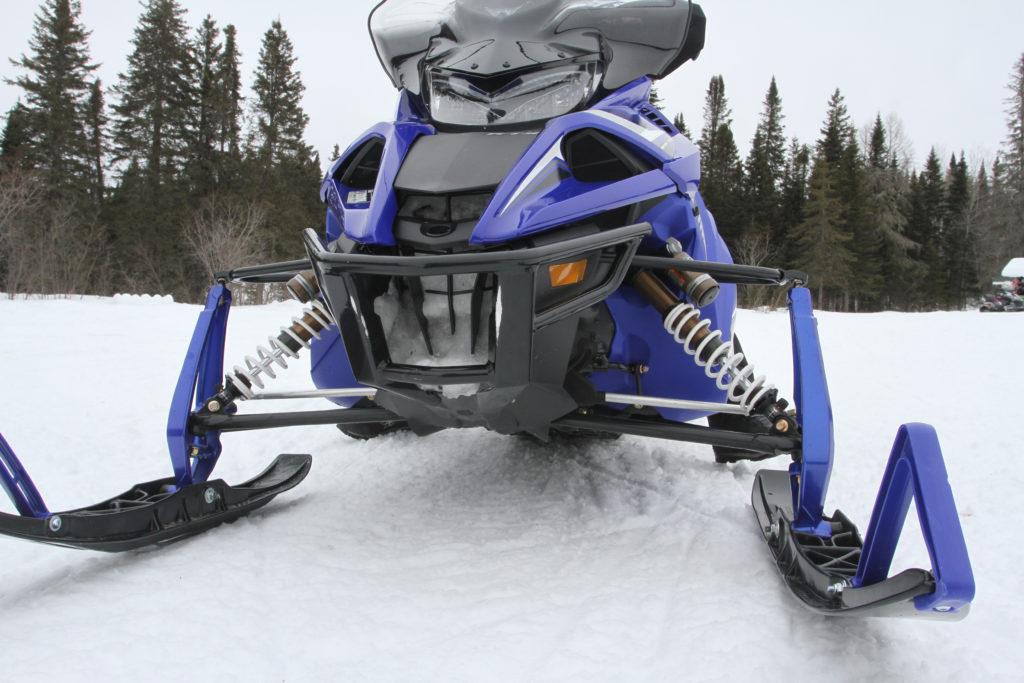 When I was a younger man, I remember that one guy who rode with my Dad and owned a Yamaha SRX 700. Low to the ground and an absolute bullet on groomed trails, I always wanted to squeeze the trigger on that blue beast. Fast forward to 2017, and the Yamaha Sidewinder RTX is an absolute beast, and faster than that SRX was, even in my dreams. On the wide-open trails of New Brunswick, the Sidewinder really shined. It delivered a level of power and speed that is unfair to compare to the other 800 sleds in this comparison. Yes, the Sidewinder is heavier in comparison to two-stroke big bores. You feel the extra heft when entering a corner, but the instant and abundant acceleration coming out erases those extra pounds in seconds. – Logan Gamble 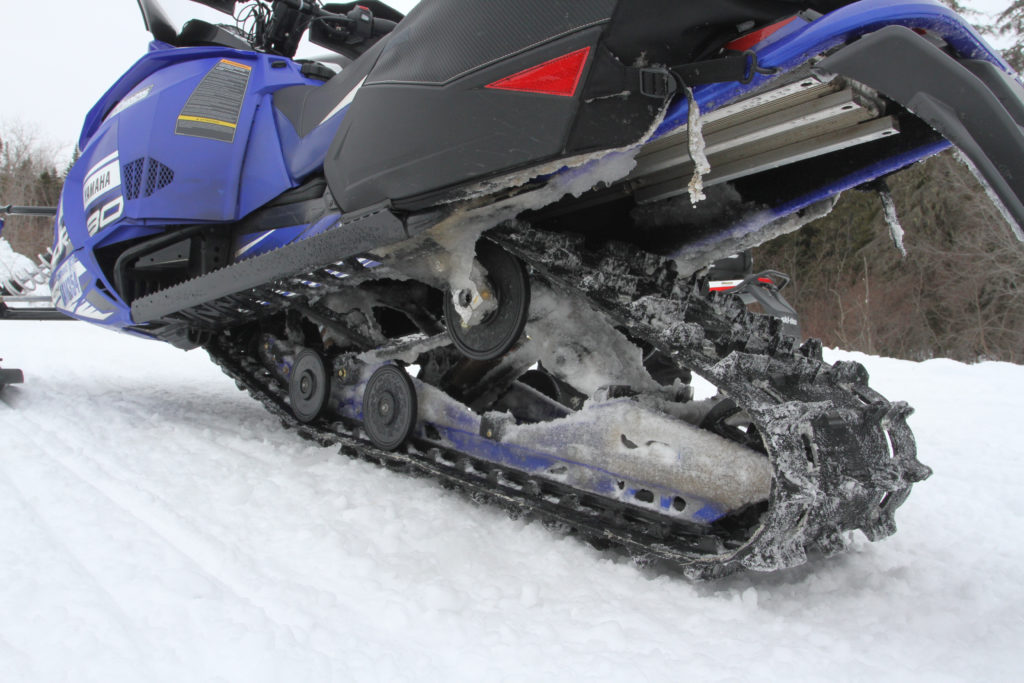 They say power corrupts…well lock me up and throw away the key. If mind altering acceleration and speed are what fuels your mojo, you’ve found your soulmate. The Sidewinder is without question the fastest, smoothest, quickest, nastiest, most bad-ass production snowmobile ever produced. How a motor with this much power and acceleration can also deliver almost docile and manageable sub-30mph trail propulsion, perfectly suited for newbies, still has me scratching my head. Yamaha chose two key areas to help differentiate itself from Arctic Cat, yet both come up short, compared to Cat components. The dual runner skis track arrow straight, but sporadic, vague steering and an uncertain push in the corners squashes confidence. Yamaha clutching begs for quicker backshift and a more aggressive upshift, while also exhibiting a strong appetite for belts. – Pat Bourgeois 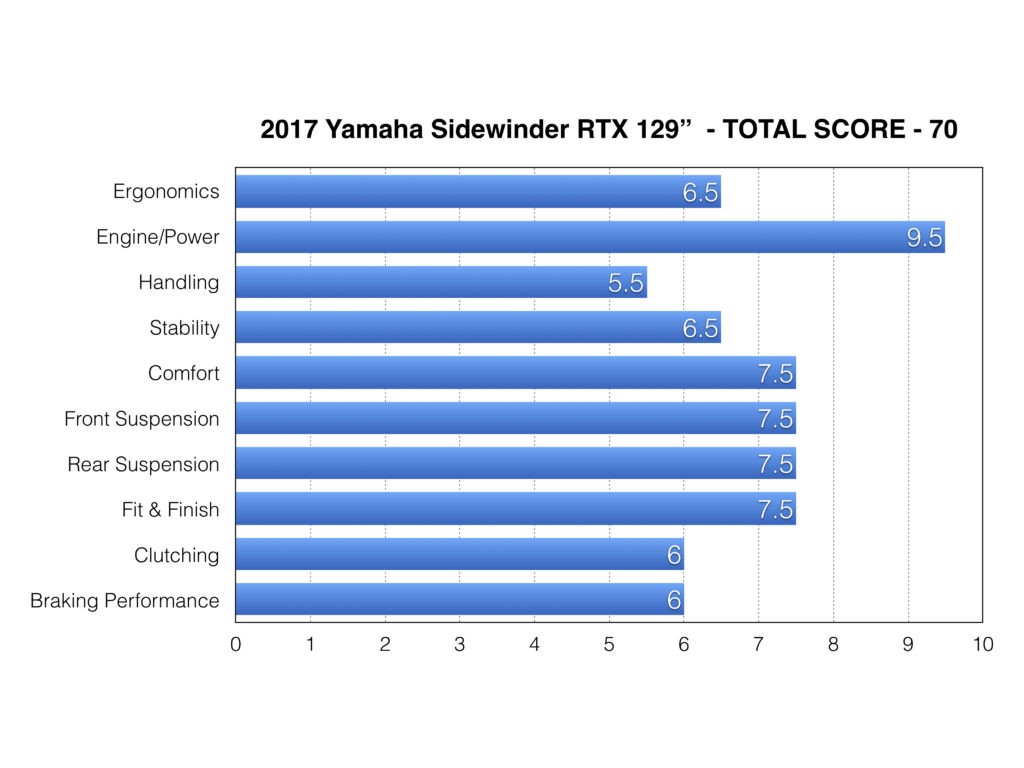