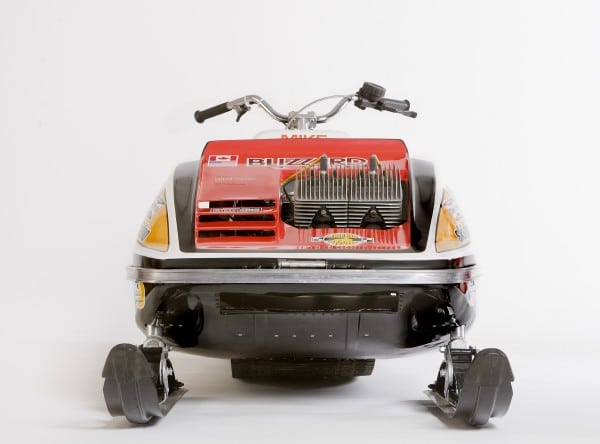 One snowmobile journalist called it the most exciting race in snowmobile history. It was the Eagle River World Championship in 1971 and young Yamaha racer Mike Trapp was set to race the 15-lap final on a 433 Yamaha. The odds-on favorite to win was Ski-Doo racer Yvon DuHamel – he had won the race the year before and was on a sled powered by a massive three-cylinder 797cc Rotax engine. While Trapp’s sled was smaller than his competitors, his advantage was weight. DuHamel’s machine had massive power but the big triple meant it didn’t handle as well as Trapp’s. Plus, Trapp’s smaller, lighter Yamaha twin was running on alcohol and making way more power than it should. When the green flag flew Trapp got out front and traded the lead with DuHamel for the full 15-laps until DuHamel finally spun out on the last lap, handing the win to Trapp. Trapp went on to repeat the next year on a bigger 650cc Yamaha, making him the first repeat Eagle River World Champion.

At the end of the 1972 racing season, Trapp was one of the hottest riders in snowmobile racing. He had back-to-back World Championships and along with his cousins, Lynn and Wayne, had placed Yamaha firmly on the snowmobile racing map. Riding a wave of racing success, Trapp flew to California to meet with Mel Calloway, the guy who ran Yamaha’s snowmobile racing program. Trapp was expecting to get a good offer from Yamaha but Calloway was reluctant to sign the Trapps to a multi-year deal, favoring the year-to-year agreement they had been using and, in fact, the overall race package of sleds, parts, and money was less than the previous year. Feeling he had done more for Yamaha snowmobile sales and image than they were offering in return, Trapp jumped a plane back home disappointed and miffed.

Once home in Minocqua, Wisconsin, Trapp got to talking with some of his friends about what had happened at Yamaha. One of his friends had been racing for Ski-Doo and he offered to call Laurent Beaudoin, Ski-Doo’s Racing Manager at the time. Trapp’s friend got Beaudoin on the phone and put Mike on with him. The two talked about a contract and they agreed to have Trapp come up to Valcourt for a contract meeting. In a matter of weeks, Trapp signed with Ski-Doo and the relationship quickly blossomed.

During the 1973 season, his first with Ski-Doo, Trapp won or placed in every race he entered with the 340 Blizzard pictured here. Upon his first return to Eagle River since leaving Yamaha, he used this sled to win Mod II. But by the fall of 1973 many things in the world had changed, and political events were starting to impact snowmobile racing. In particular, the OPEC oil embargo happened in October of ’73 and the world was entering a huge energy crisis. Fuel prices spiked and, with so much uncertainty, no one was really crazy about doing anything that wouldn’t bring an immediate return. Ski-Doo, Polaris and Arctic Cat got together and made a handshake agreement not to go Sno Pro racing for the coming season. When racing began a few months later, Ski-Doo stayed home, honoring the agreement, but Polaris and Arctic Cat backed out and decided to go racing. Trapp, still under contract with Ski-Doo, was more or less left out of racing by Ski-Doo’s decision to honor the agreement they had made.

During the fall of 1973, while all this was going on, Trapp was living in Valcourt getting ready for the 1973-74 race season. Once his day in the race shop was done he found there wasn’t much for an American to do in rural Quebec, so he asked his boss, Conrad Bernait, if he could put his 340 Blizzard from the previous year back together. Ski-Doo had used it the previous spring for testing and was now simply collecting dust. Getting the go-ahead, Mike was not only able to rebuild the sled, but he also sent it back home where his younger brother Brian who raced it briefly. At the end of the 1974 season it was put in a shed where it sat for the next 20-years.

Ski-Doo gradually worked its way back into racing after falling behind after sitting out the 1974 season. Trapp stayed on and was part of the brand’s formidable Sno Pro team in 1976 that consisted of Leroy Lindblad, Yvon DuHamel, Larry Rugland, and Trapp.  Mike switched from ice racing to cross-country racing for the 1977 season and posted his final victory at a race in Forest Lake, Minnesota. He went on to head a successful construction business.

In 2004 Trapp began talking with John Jantsch, a snowmobile restoration expert from Wausau, Wisconsin. He mentioned the 1973 340 Ski-Doo Blizzard racer he still had stuffed in his shed and Jantsch said he’d like a shot at restoring it. Trapp pulled it out and found that, while complete, it had suffered damage to the tunnel at some point. Regardless, Jantsch stripped the sled down to the tunnel, straightened it and gave it to Trapp who polished it up. Jantsch spent the next three years restoring the sled.

While the basic chassis of the sled is very much similar to what anyone on Ski-Doo’s racing program would have had in 1973, the engine is what makes this sled unique. The Rotax 340 features the best the Austrian engine maker had to offer including a magnesium case, titanium rods, and a short stroke/big bore dimensions designed for high RPM. While there could be another 1973 factory racer out there from the likes of a few local Quebec racers, such as Lucien Lamoreaux and Gaston Ferland who would get the good stuff from the race shop, as of now this is the only 1973 Ski-Doo factory team sled known to exist. It is currently on display at the Snowmobile Hall Of Fame in St. Germain, Wisconsin.

To learn more about the Snowmobile Hall of Fame visit www.snowmobilehalloffame.com 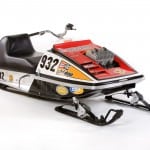 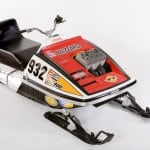 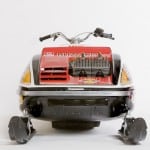 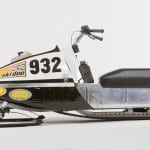