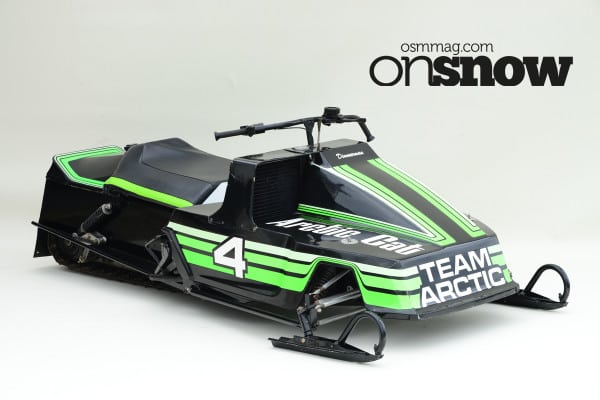 The lore and mystic surrounding Arctic Cat’s successful racing efforts during the late 1970s is often a driving force for many vintage snowmobile collectors of sleds from that era. The Z and Sno Pro series of sleds from Arctic Cat were dominant on the racetrack and incredibly stylish. Their sleek and muscular lines bolstered by what has become Arctic Cat’s signature green and white graphics allows these sleds to stand the test of time, looking as powerful and iconic today and as they did more than 35 years ago.

The 1980 Arctic Cat 340 Sno Pro pictured here is part of the Richard Pederson collection, better known amongst collectors as simply the Zedshed. The 1980 Sno Pro represented a new direction for the factory race efforts of the time; moving away from hand-built one-off racers to factory built sleds in hopes of evening the playing field. To learn more we spent an afternoon with Hall of Fame racer Jim Dimmerman who tells us in his own words, his racing journey and of the personal significance of the 1980 Arctic Cat Sno Pro.

My first racing season was 1974…I was just out of high school, living at home with my parents, and working at a snowmobile dealership. There were hundreds of guys racing snowmobiles during that time, and to be better then the guy next to you, you had to spend more time at it. My job allowed me to work and still race full-time. That’s why I became more successful at it…I could spend more time on it. I got good enough to where I quit my job for the 1975 season and raced full time during the winter.

At that time, Roger Skime was Arctic Cat’s Race Director. He was always at all the major races working with guys like Charlie Lofton, Bob Elsner and Larry Coltom Because I was racing Arctic Cats I got to know each of them a little bit. I was good, but I was nothing like, say, Brad Hulings. When I first saw Hulings you could just tell that man was a standout.

I think when Roger Skime was looking for new racers he saw my willingness to talk and my openness to people. Looking back and knowing what I know now, I think Roger wanted more than just a good racer. People like Davy Thompson for example – it didn’t matter that he never won the world championship, he was Davy, he was always friendly and a good representative for the brand. People liked that. So I think Roger Skime probably recognized me as a competitive racer as well as someone that people liked and was willing to talk to fans.

In 1977 I had a solid season aboard the Arctic Cat Z’s racing for Jerry Simison who owned the Fargo based Team Frustration. I won the 340 class at Alexandria against a bunch of tough competitors. I think we had three re-starts in that race and Roger was there. I won the 440 Super Stock class at Ironwood against a lot of competitors. I remember Yamaha was there with the SRX, Ski-Doo was there, Arctic Cat was there, and of course Roger was there too. I came close to winning in Eagle River that year too but Dick Trickle passed me on the last lap while I was leading the 440 class…I finished second, and once again Roger was there. After that season I think Roger had seen all he needed – I was a loyal, determined young man who wanted to win.

Later that summer I received a phone call from Dennis Zulawski. He said they were looking for a new driver and he wanted to meet with me in Minneapolis. He asked if I was available in the wintertime and if I would be willing to move to Thief River Falls. Of course, I said, “Yes!”

On my first trip to Thief River Falls I walked into what was known as “The White House”, the administration building at Arctic Cat, and I met Bill Decker, the head of Arctic Cat marketing at the time. He was the guy who was going to be our boss and oversee racing. Bill grabbed me and we went down through some buildings, across the parking lot and over to the race shop. He pulled out his card key and pushed it in the door, the door opened and in I went. There stood all of them…Larry Coltom, Roger Skime, Davey Thompson, and Durmont Wahl, and they were hovering around a 1977 1/2 prototype that was going to be the test bed sled against what they were building for the upcoming year. They all looked up from the machine and Bill Decker said, “Hey guys, I’d like to introduce you to our new driver, Jim Dimmerman.” Never was there a time or place where I felt I was more out of my league then that moment. I remember thinking “I don’t think I can ever be one of these guys.” I was intimidated and overwhelmed all at the same time. 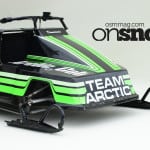 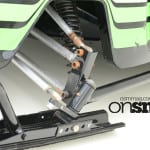 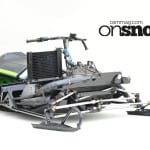 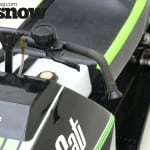 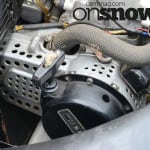 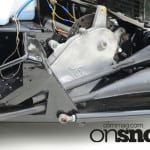 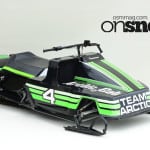 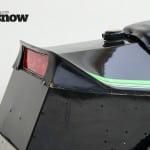 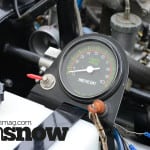 They all came and shook my hand and welcomed me. I was the city slicker, the kid from out of town and I was definitely out of place in Thief River. Up to that time Arctic Cat and Polaris all picked their guys from within. I was from White Bear Lake, but in their eyes I was from the big city. I had to gradually work my way in, but it wasn’t long before Larry and I became close friends. To this day I don’t think there’s another man smarter in the business. He has a gift from god to be able to get on a machine and be able to hear it, feel it, sense it and come away with knowing what is needed to get it dialed in. Had he stayed in racing he would have had every bit as much success as I had, probably more. But he went on to become a development driver, so while we were gone racing he was at home developing our Sno Pro sled to make them better. He was very much a part of Team Arctic even though he was not racing.

By 1980, when the sled you see here was set to go racing, I was heading into my third year with Team Arctic. That year the industry decided they were going to produce production race sleds. They were trying to introduce a lower level of modification to the public because most guys couldn’t race against us. The theory was to build a sled that would put everyone on equipment that was equally competitive. When it all shook out I don’t think an independent ever won.

Building those production machines took us away from hand-building our racers. That was a mistake because we fell behind and you can’t catch up once the season stars. There were a lot of things our 1979 machines had that the 1980 sleds didn’t have due to being production oriented. The 1979 season was a great for Arctic Cat and Scorpion (which was then owned and being built by Arctic Cat); we won something like half of all the races including the World Championship. In 1980 we lost ground, although Brad Hulings did well on his Scorpions.

The 1980 Sno Pro was a definitely a nice-looking machine, although I wouldn’t deem it my most successful year with Arctic. The highlight of the season was winning the Hetteen Cup, an honor that represented more than just winning one race but rather an accumulation of points from the weekend. It was a big win for me and for Arctic Cat, but looking back, it was becoming more and more obvious that we didn’t have the power to match the Rotax engines.

In addition to winning the Hetteen Cup, the 1980 Sno Pro became the basis for success I would find in later years. In 1981 Brad Hulings won the World Championship on a Scorpion. There were six sleds built that year, two scorpions and four Arctic Cats. When Arctic Cat went bankrupt one of those sleds was sold to a guy in Canada and Ted Nielsen bought the other five along with all kinds of parts and hired me to race for him. So I sat and thought about it for a while in the shop and decided that with the Scorpion I had a championship sled based on the parts they had and the aerodynamic hood.

In 1982 and 1983 I rode it the way it was, tuning clutches and shocks. Then in 1984 we tore it down to fix some cracks in the bulkhead and freshened it up. That year Ted Nielsen bought some twin trackers from Ski-Doo and we put one of the Rotax engines in the Scorpion. We also made a new bulkhead, water-cooled the brake and redesigned the hood. When we were done we had a Rotax-powered sled nestled into a heavily reworked Sno Pro racer and the “Phantom” was born.

Editor’s Note: Jim Dimmerman went on to win the 1984 Eagle River World Championship aboard the Phantom and that race is often viewed as his crowning achievement in a long and storied racing career.