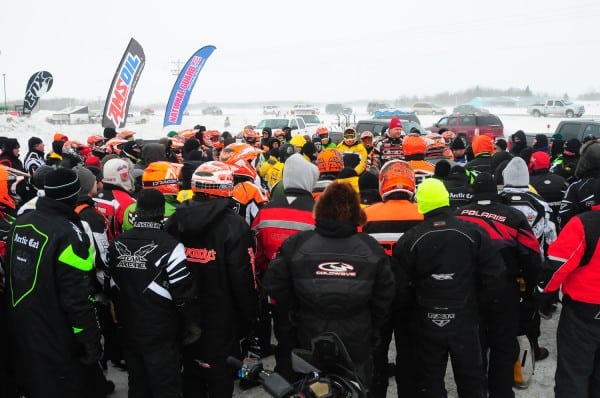 The once shining jewel of the snowmobile cross country community (United States Cross Country USCC) has ceased operations after what can only be described as a challenging period following the tragic death of its founder and visionary leader Pat Mach in February of 2011. While the circuit forged on under the caring and steady hands of Pat’s wife Lisa and other close family members and friends, Lisa and her family made the decision to cease operations and take pride in the growth and success the circuit realized under their, and more importantly Pat’s guidance. Here is the official release:

Minto, ND (June 9, 2012) – It is with both pride and heavy hearts that the United States Cross-Country Snowmobile Racing Association (USCC) will cease operations effective today.

Formed in 2002, the USCC literally put cross-country snowmobile racing back on the map and for the past decade has guided the sport’s resurgence. The circuit and it’s family of racers and crews suffered a tragedy in February 2011 when USCC founder and driving force, Pat Mach, passed away. Since then, the circuit has been run by the Mach family in Pat’s memory. Today, the Mach family is announcing that it will no longer continue to run the USCC.

“We’re so happy that cross-country snowmobile racing was able to grow and flourish under the USCC name,” said Lisa Mach, owner of USCC. “This was a realization of Pat’s dream, to have cross-country become strong again.”

“There are so many people we could thank,” said Lisa, “Especially our crew, the racers our sponsors and our fans. We’re forever grateful for the friendships we’ve made and good times we’ve shared. It truly means a lot to us and we will never forget the time we spent at the races with everyone. We thank everyone for all their contributions and hard work to make it all happen, and we wish everyone the best of luck going forward.”