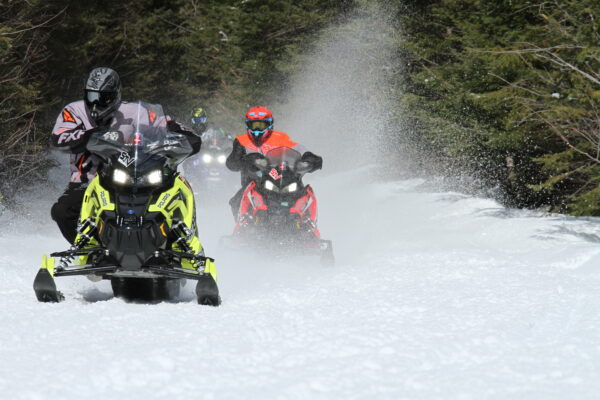 One of OSM/STV’s annual trips is always in New Brunswick. This year we headed to Bathurst and tried out a few of their local hotels. We stayed at the Atlantic Host Hotel, Danny’s Hotel Suites Events Centre, and the Auberge De La Vallee Hotel. No matter which hotel you choose, you will not be disappointed. All have modern rooms and restaurants onsite. 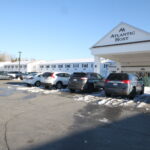 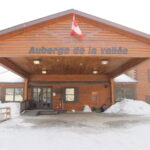 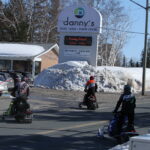 Bathurst itself is a town with a population of about 12,000 people, and because of that, the trail system has a more remote feel to it as you ride away from the city. Bathurst is located in the north eastern region of the province, which is more mountainous compared to southern New Brunswick, which helps to contribute to the remote feel of the system. This was one of the trips I was looking forward to the most in the winter of 2019, because we were going to ride in the Christmas Mountains, and Piston Alley. 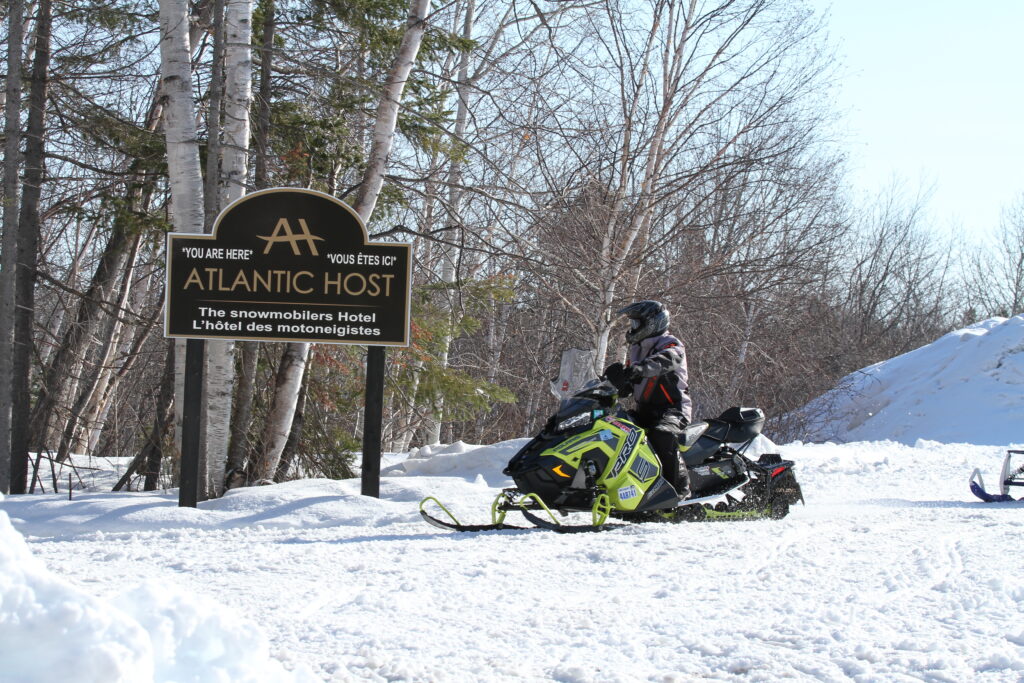 Our main ride in the Bathurst area, was out and back to Serpentine Lodge. This was the ride the boys were talking about all the way from Toronto, and I have to say, this ride lived up to the hype. The ride from the Atlantic Host to Serpentine Lodge was epic! 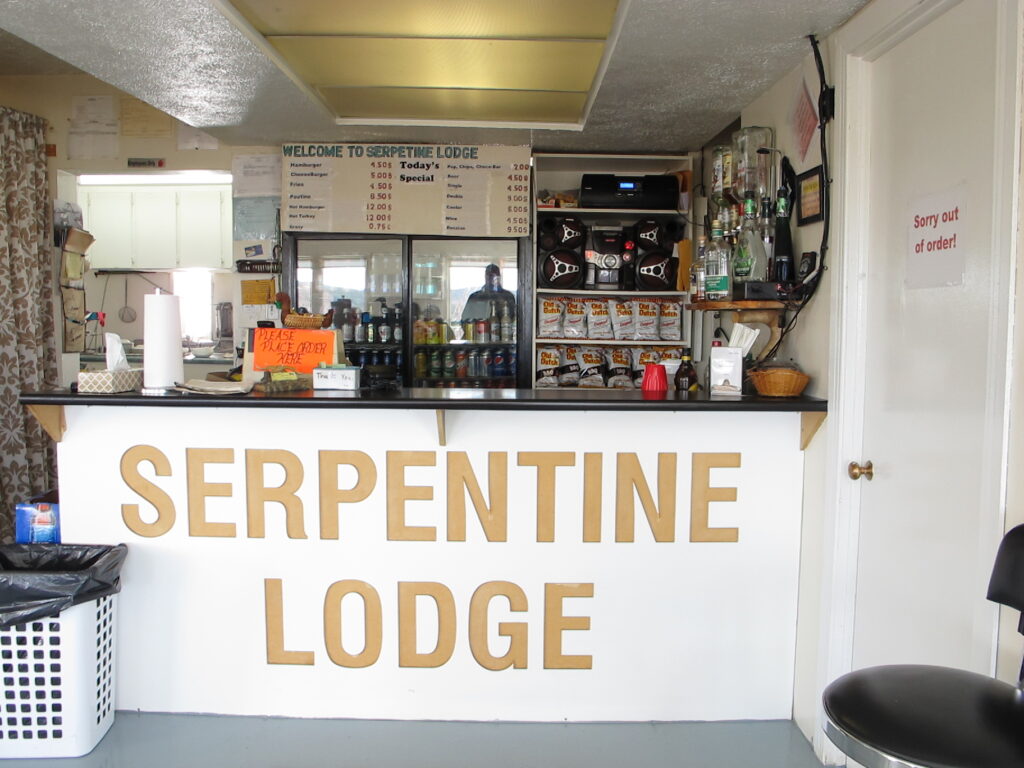 Alyre at the Serpentine Lodge is definitely one of those memorable characters you meet sledding. If you are ever riding in this area you have to make the run to Serpentine. 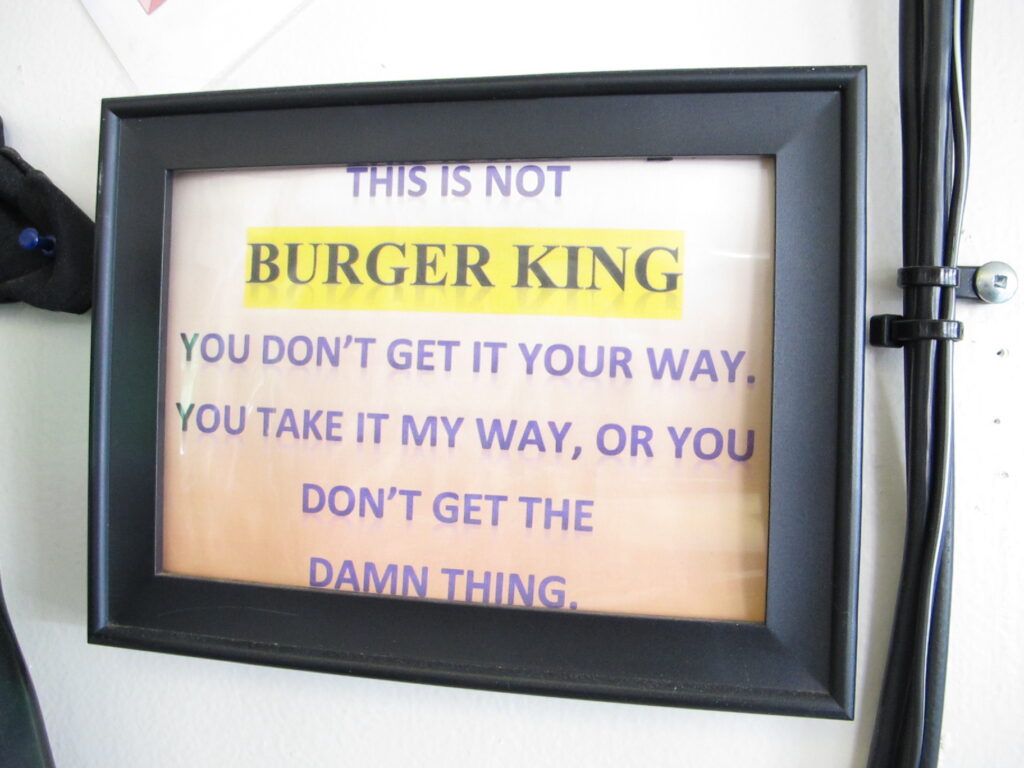 The day started chilly but not cold, with Blue Bird skies when we pulled our sleds out of the heated garage at the Atlantic Host. Immediately we were on freshly groomed white top right out of the parking lot, and things only got better from there. We had just about a 175 kilometre ride to get to Serpentine, where we planned to get fuel and stop for lunch, with a few stops along the way to shoot video and stills. 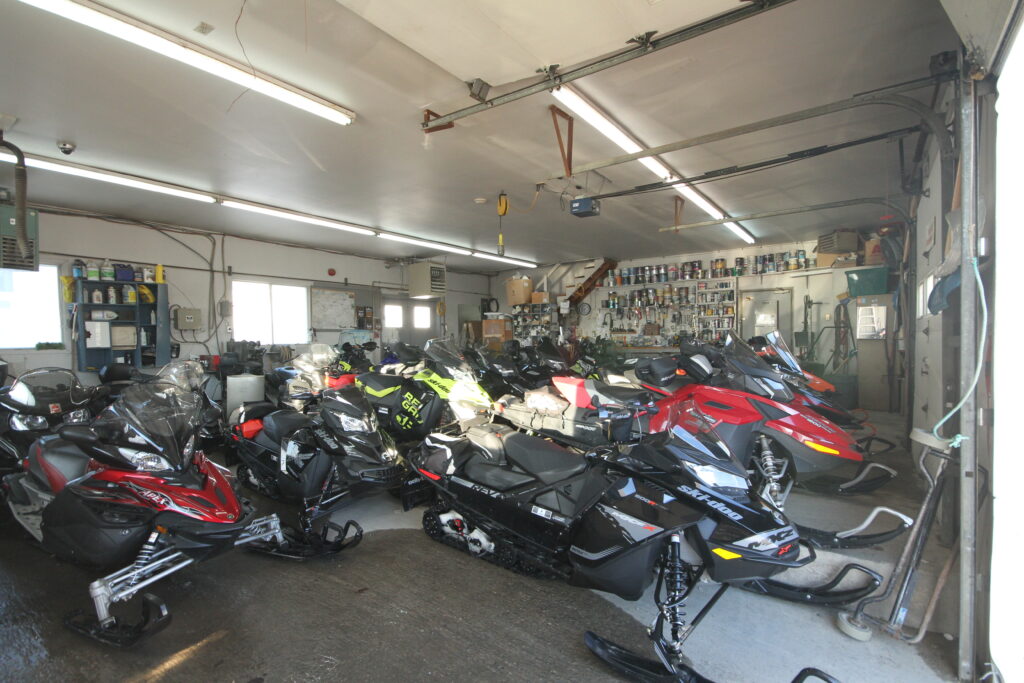 The Atlantic Host has a heated garage available to sledders, but it’s first come first serve. Get there early if you want a spot! Fuel on the trail is never an issue. 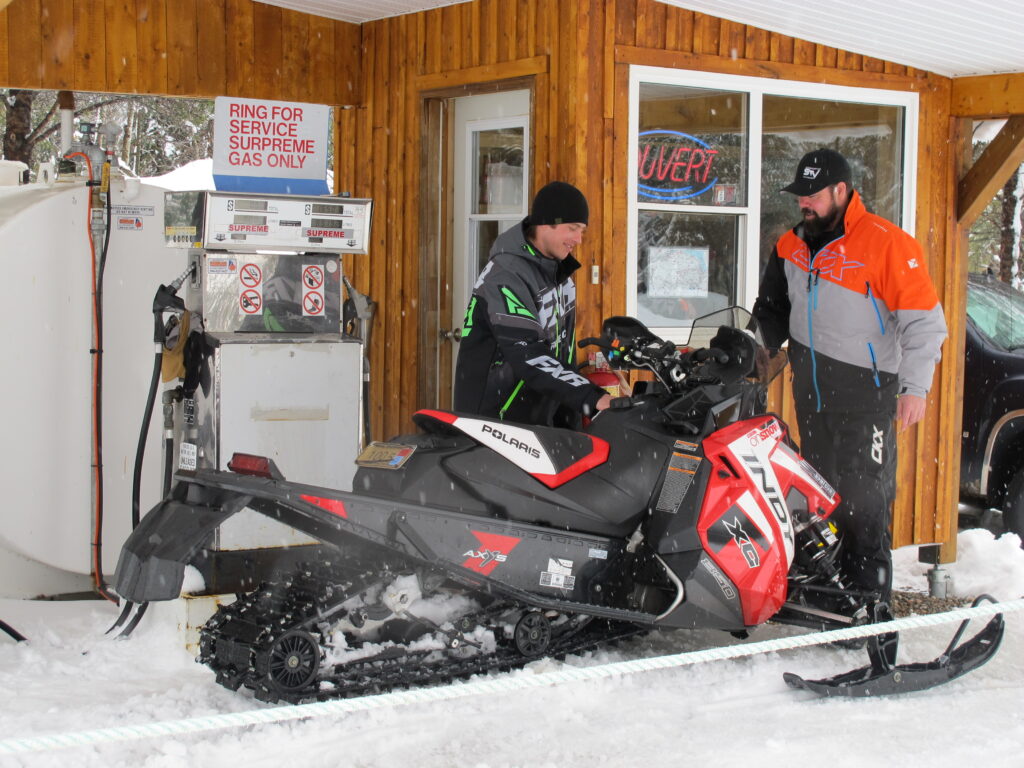 Here we are topping off the tanks at Rogers Lake.

Once we cleared the local Bathurst city trails, our next stop was for a quick warmup at the Nepisiguit Sports Lodge. If you are passing though, take a few minutes to have a coffee, or a small snack; this is one of the clubhouses that’s worth the time to stop at. Plus, you’ll most likely have a chance to get some inside information about what the conditions are like.

From there, Rogers Lake Lodge was our next stop for a gas and go. We probably had enough fuel to make it to Serpentine, but with some of the extra riding we had to do for TV, we figured we better not push the range too far. I should mention that even though much of this system has that remote feel to it, there are still plenty of places to stop for food and gas, and there are a number of warm-up shelters out on the trail if you needed them. Incidentally, you’ll often find club members hangin’ out at the warm up shelters with a fire on. Why? Because it’s what snowmobilers do! 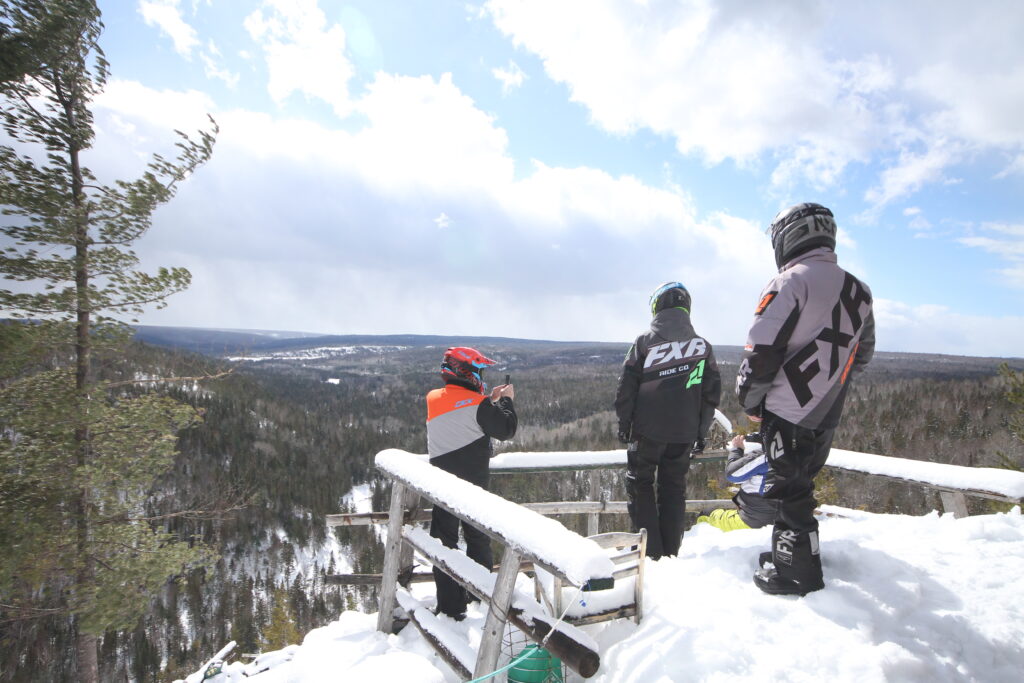 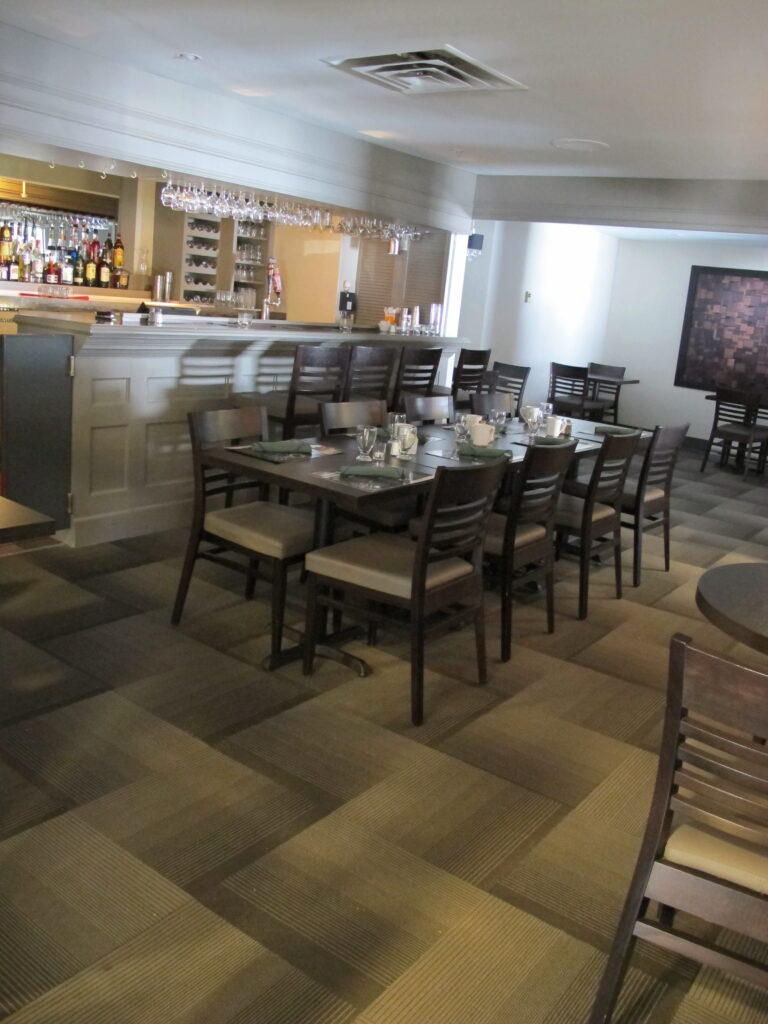 The restaurant at Danny’s was just another one of the great places to eat during the trip. It’s at this table I had my 11th CLUB Sandwich of the tour!

At this point in the ride, we were approaching the “Piston Alley” on trail 23, the one that the guys were talking about. It sorta sneaks up on ya because there’s not a sign that tells you that you are entering the “Alley”, you just notice that the trail is getting wider, and the shoulders of the trail are getting wider, and the curves and elevation changes are mellowing out, and you realize you are in the zone, flowing with the snowmobile down the trail. 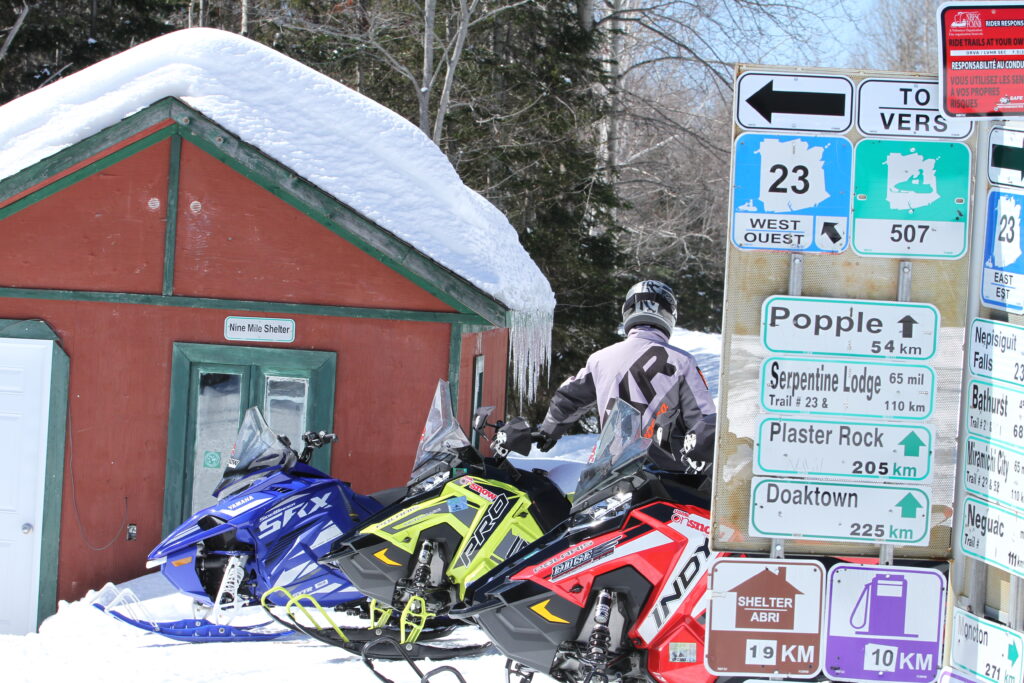 Signage on the trails in New Brunswick is the best I’ve ever seen. Being new to the area, accurate signage is a great companion to have on the ride.

Our Blue Bird day was also making this trip extra excellent; definitely my best day on the snow in 2019! Even looking back on our entire trip, the photos of this day while on these trails, with rolling hills in the background, are the pics I show people on my phone when I’m talking about riding in New Brunswick.

Arriving at Serpentine Lake Lodge, we were all ready for a rest, and one of Alyre’s famous burgers. A little bonus was meeting Butch, the resident dog-boss of the lodge. This fella was clearly in charge of all he could see, out of a pair of spectacular grey eyes. 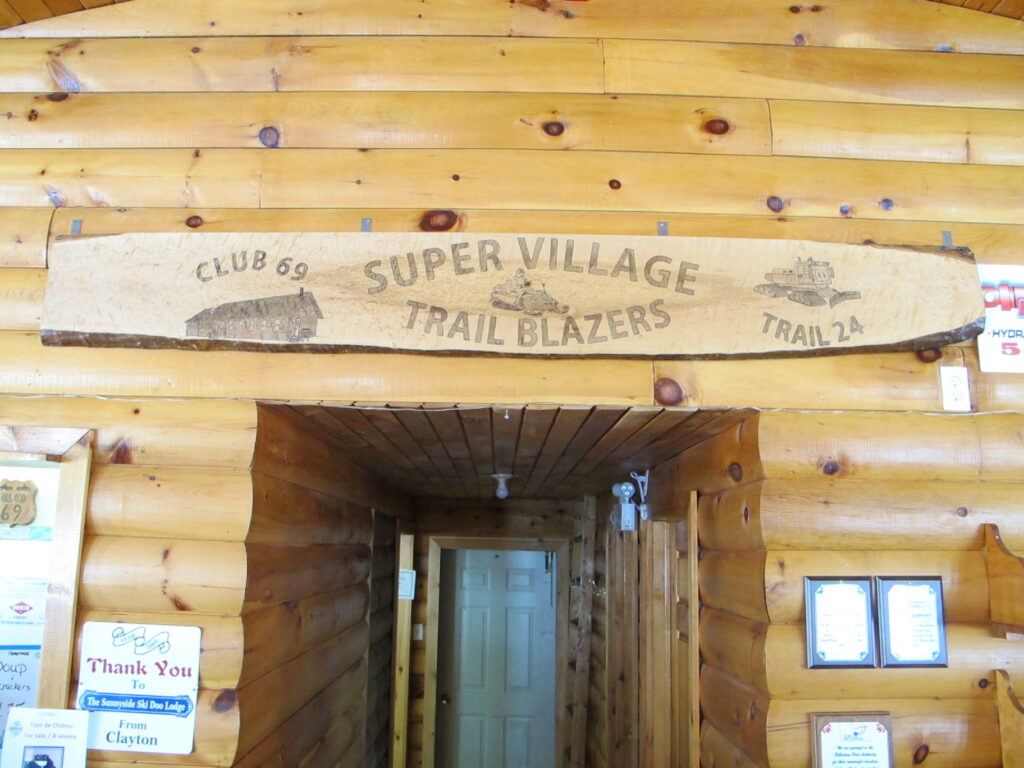 The Supervillage Trailblazers Clubhouse is another one of those places you have to make time to stop at. 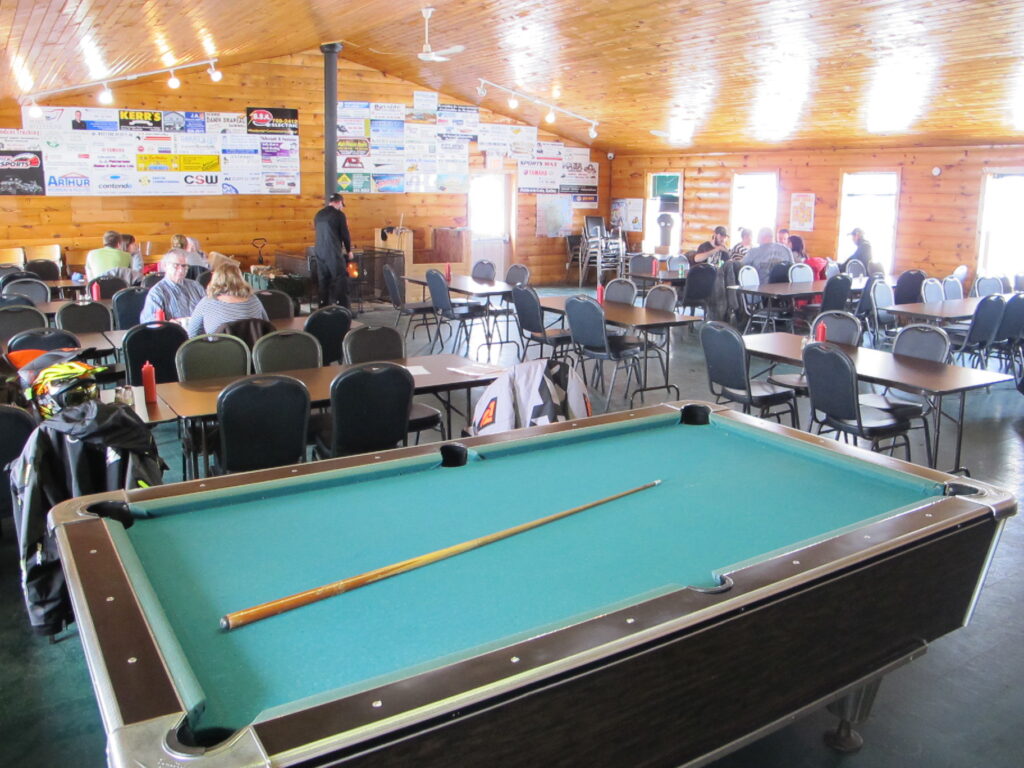 This Clubhouse is spectacular. Bet you can’t guess what we had for lunch….

After lunch, we fuelled the sleds and discussed our options for the return trip back to Bathurst, for which there were a bunch of choices. We settled on returning back on the same trail, mainly because by this time, it was getting a little later in the afternoon. Plus, a hearty dinner at the Host, and an adult beverage was calling our names. Needless to say, the return ride was as good as the ride out, and it was all we talked about over a late dinner.

The following day we were headed to the Jacquet River Gorge, and the Supervillage Trail Blazers Club 69 Clubhouse. This was going to be a shorter day, but would eventually ride out to just over 200km, with the anchor of the day being a lunch stop with what is rumoured to be the best Club House Sandwich on the trails. 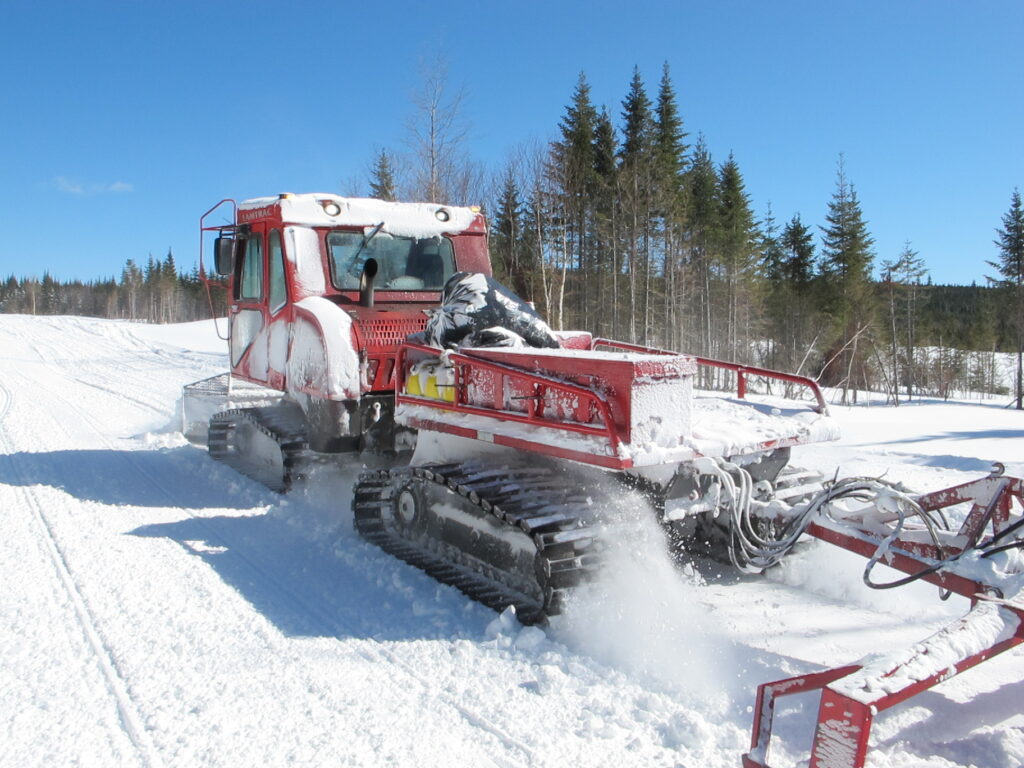 The Supervillage Clubhouse, was one of the nicest I’ve ever been to. Like many clubhouses in the New Brunswick system, it’s accessible by road as well, so it’s become a real part of the community. A warm, inviting attitude greets you when you walk thought the door. There is plenty of room to spread out, and even a pool table to pass the time as you wait for food. Oh, and the clubhouse at the Clubhouse, was the best one I’ve had in a long time!

Each of the destinations we visited on this adventure to New Brunswick was unique to themselves, and memorable in their own way. However, this is just the tip of the iceberg for the snowmobiling opportunities in New Brunswick. What this means is that I have to go back. Every aspect of the trip to this province, from the trails, to the people, to the environment itself, make a huge impression on the people who visit. The only problem with going to NB is that it just makes you want to go back. 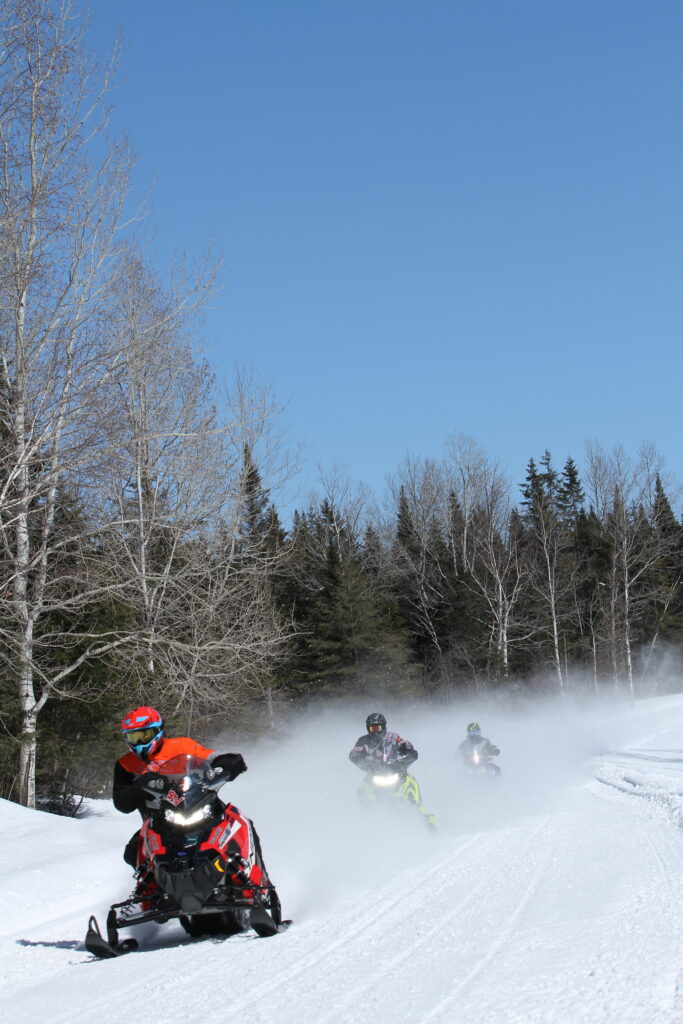