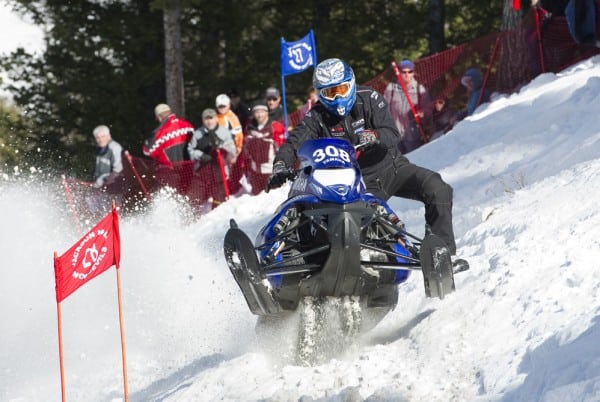 While they didn’t win, Yamaha was plenty pleased with the results of their first ever factory attempt at putting a four-stroke powered snowmobile over the top at the legendary Jackson Hole World Championship Hillclimb. Yamaha pilot Kody Malmborg Jr. was the man behind the bars who not only put the Nytro MTX over the top of the insane grade, but did so quick enough to qualify for the Pro finals, the first Yamaha to do so since 2001. You can read the loud and proud official Yamaha release below and soak in the tuning fork pride.

Pleasant Prairie, WI—Kody Malmborg, Jr. did what many doubters thought was impossible on Saturday, March 24 – top the Snow King on a four-stroke snowmobile at the Jackson Hole World Championship Hillclimb put on by the Jackson Hole Snow Devils. But top the mountain he did, powering his Yamaha FX Nytro MTX to the top of the steep course as the first four-stroke to do so in the 37 years the event has been held – while also becoming the first Yamaha to qualify for the Pro finals since 2001. In all, out of nearly 500 entries, only 60 or 70 made it over the top.

The Jackson Hole World Championships are, as one observer put it, the Daytona of snowmobile events, and the mountain course practically defies description. It presents itself as a nearly vertical face of about a half-mile in length, with 28 gates that the machines and drivers have to negotiate on the way up. Favoring immense horsepower, traction, responsive handling and of course major riding talent, the course quickly weeds out all but the best. “It’s basically like driving up a skyscraper,” said Yamaha snowmobile marketing manager Wade West.

Friday was reserved for Semi Pro finals and Stock qualifying – with Saturday scheduled for the big-horsepower modified and Pro sleds like Malmborg’s FX Nytro, and Sunday reserved for the Pro finals. Even with the FX Nytro’s extreme horsepower and torque, the conditions were so challenging that Malmborg was making it just past halfway up during most of the classes he had entered. The breakthrough came on Saturday afternoon, during qualifying for the Mod 700 Pro event. “The course conditions on the bottom half were slushy, and the top was really icy with rocks and stumps, five-foot ruts and six-foot trenches,” Malmborg said. “When I left the gate everything felt great, and I just told myself to stay calm and work through every gate, look ahead and pick my lines, use the trenches to my advantage and carry my momentum. I was definitely exited to make it over the top of one of the most challenging hills anywhere. There was definitely some hollering going on!”

In Sunday’s Pro finale, Malmborg finished eighth among the world’s 25 top hillclimbers after encountering a few problems on his way up the course. But his achievements on Saturday had already made history for Yamaha, for four-stroke snowmobiles, and for Kody’s newfound career in hillclimbing. “Our goal was just to get one sled over the top at Jackson Hole, and we are elated to be the first four-stroke in history and the first Yamaha team to do it since 2001,” said Yamaha’s Eric Josephsen. “Doing it on our first try makes it even more incredible, and I really want to thank our crew chief ‘Big Kody’ Malmborg for working so hard to make it happen. I’ve always said that the FX Nytro can do everything that a two-stroke sled can do and today we proved it.”