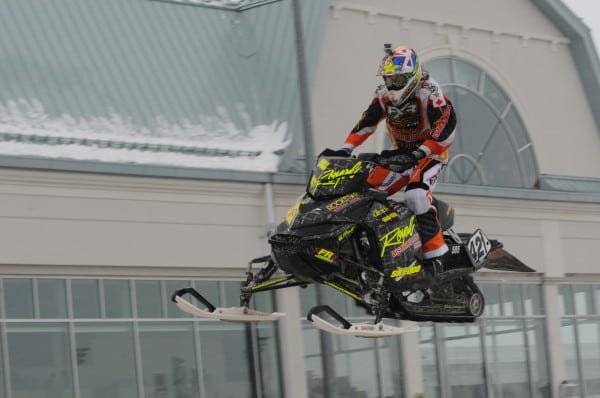 Is it that time of the season already? With the possibility of the first snow just a little more than four months out and the kick-off to the snocross season a little more than five, the behind the scenes moving and shaking of drivers, teams, and sponsors has begun. This one crossed our flickering computer screen late yesterday as Dylan Hall inked a two-year deal with Team Rockstar Energy Polaris of the CSRA circuit. Here’s the “official” release…let the rumors begin.

Team Rockstar Energy Polaris Racing is pleased to announce the signing of Dylan Hall to its North American snowcross team for the 2015 and 2016 seasons. Hall, who hails from Ayr, ON, will campaign the full CSRA Pro Open National and Regional Championships alongside team stalwart and multi-time champ Iain Hayden. In addition to the CSRA points chase, Hall will also race selected ISOC events in the United States with the team.

“We have been wanting to add a second pro to the team since the departure of Lee Butler and we had our eye on Dylan as a replacement for Butler last year, but he wasn’t ready to make the commitment at the time,” said team owner and OTSFF Sports Marketing Group president Andre Laurin. “As Dylan was available for the upcoming season, we took advantage of the opportunity to sign him to a two-year contract and we’re stoked to have him on the team.”

Although just 21-years old, Hall has plenty of racing experience both south of the border and in Canada, and is a valuable asset and welcome addition to the team. Like many snowbelt Canadians, Hall started riding snowmobiles at a very young age and began sanctioned racing at the age of 12. A successful amateur career followed, which saw Hall nail down the 2008 CSRA Sport 500 Championship, followed by the 2009 CSRA Sport 500/600 Championships. In 2011 Hall snared the CSRA National Semi-Pro Mod Championship as well as the Semi-Pro Stock Championship.

In 2012, moving up to the Pro ranks, Hall impressed with consistent results that delivered runner-up in the CSRA Pro Open Regional Championship and fourth in the National title hunt. He also ventured stateside, racing selected ISOC events, recording a noteworthy seventh in the Pro-Lite class. That same year he received the Rookie of the Year Award as well as the Most Improved Rider Award.

This past winter Hall divided his time between the ISOC and CSRA Championships. Although he struggled in the U.S., finishing eleventh in the Pro Lite series, he claimed eighth in the CSRA Pro Open Regional Championship and tenth in the National Championship. Hall campaigned only four rounds, scoring podium finishes at each round including one win.

“After racing for the family-based Hall Transport team since day one, I’m excited to be joining a full-fledged, high profile factory team like Rockstar Energy Polaris Racing,” Hall said. “I’m going to kind of miss the family atmosphere at the beginning of the season, I’m sure, but the time has come for me to step it up. When I got the offer from Andre Laurin to join the Rockstar Polaris team last season I didn’t feel ready, but now I do.”