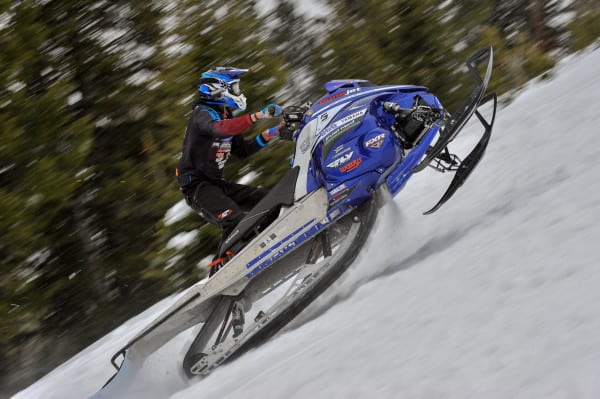 When you have been out of the hill climb competition for a long, long time and rejoined the fray a season ago, its the small victories that count. Thus last season, Yamaha was pleased with any progression the effort showed. This year the progression has gone even further as Chad Jorgensen just scored a third place podium in RMSHA. What ‘s next you ask? A win…gasp!!! Time will tell. Here is the official word from Yamaha on the podium finish:

Aboard his Nytro MTX, Yamaha Snowmobile Racing’s Chad Jorgensen powered to a third-place podium finish in the Pro 600 Modified class at the fifth round of the 2013 RMSHA hillclimb series at Beaver Mountain in Garden City, Utah on Saturday, April 13. The finish is a huge achievement for the Nytro, as it represents the first podium of the year and the second podium in history for a Yamaha four-stroke in this ultra-competitive series. There was more good news at event, as Jorgensen added a top-five finish in Pro 600 Improved, with Cable Willford finishing eighth in the class. Willford then grabbed a sixth and Kody Malmborg a 10th in Pro 700 Improved, while Jorgensen took a sixth in Pro 700 Modified and Kolton Malmborg added a sixth in Semi Pro Modified. And finally, Kolton put his Nytro MTX into the Semi Pro Stock final, marking the first time a Nytro has qualified among its 800cc two-stroke rivals in a stock class.

Situated at the Beaver Mountain Ski Area, the racecourse uniquely started downhill, then made a turnabout and zigzagged up the hill nearly 1000 vertical feet – with plenty of jumps, bowl turns and gates along the way. Snow arrived just in time during the week to offer excellent conditions for hillclimbing, and the weather was equally agreeable with sunny skies and 60-degree temperatures during Friday qualifying. In all, Yamaha riders including Jorgensen, Cable Willford, Kody and Kolton Malmborg, and even Nathan Titus – available now that the woods- and ice-racing season is over – qualified in 12 different classes.

Jorgensen was revved up for the event and his top-five finish in Pro 600 Improved fired him up for Pro 600 Modified, where he quickly staged his Yamaha and raced to his dramatic podium finish – just 1.5 seconds behind the winner. The trip up the hill was a strong one, with Chad flowing beautifully, making each turn count and keeping his corner speed up. Now fully energized, Jorgensen lined his Nytro MTX up for his third final of the day, Pro 700 Improved. This time he was totally in the zone, flying up the hill at an incredible rate and building a nearly two-second lead on the clock by the halfway point before catching a bump while driving hard into a corner and then unloading. Although Chad was only credited with 12th place in the class, his run served notice that it’s only a matter of time before a Yamaha four-stroke claims an outright RMSHA class win.

“The team really pulled together this weekend,” said Yamaha snowmobile hillclimb technical coordinator Troy Johnson. “Kolton performed really well, qualifying in all three classes, and his sixth in Semi Pro Mod was his best result of the year. Also Chad was ready to win the Pro 700 Improved class and he nearly did it. I’m looking forward to more podiums in the next round, and maybe even a win.” Yamaha Snowmobile Racing’s Eric Josephsen added, “I’m very proud of how the team has improved this season. At first just qualifying our four-stroke Nytros for the finals was an achievement. Now we’re on the podium and knocking on the door for an outright win. I can’t wait for the season finale in Idaho next weekend!”