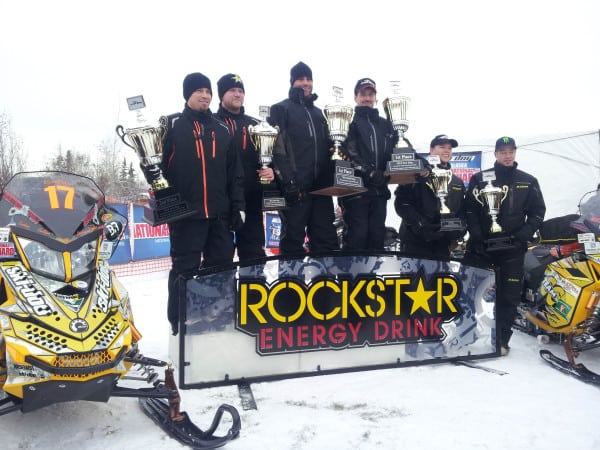 The crew from Valcourt was more than just a little proud upon hearing the results of one of the most grueling and challenging snowmobile races, the Iron Dog. Not only did the yellow squadron win the race with the team of Dusty VanMeter and Marc McKenna repeating the feat in back-to-back attempts, Ski-Doo claimed the second, fourth, and fifth place positions as well. Here’s the official word from Ski-Doo:

BRP’s Ski-Doo X-Team racers Dusty VanMeter and Marc McKenna powered their way to a second straight win in one of the most sought after and prestigious snowmobile races, the Iron Dog Classic.

Ski-Doo snowmobiles made a strong statement about their durability and performance by taking four of the top five finishing positions in this year’s race. The E-TEC powered sleds combined power, speed, fuel mileage and outstanding handling to make it look much easier than it actually is.

The Iron Dog snowmobile race covers over 2000 miles (3200 km) of rugged Alaskan terrain that tests the toughest of men and machines in the worst of weather conditions. McKenna and VanMeter ran towards the front of the pack for most of the race as their experience and savvy strategy served them well. They were the fastest into the halfway point at Nome and ran a strong southbound leg to wrap up the race, choosing their course and rest points carefully, eventually winning by 48 minutes.

Racing the Iron Dog is truly a team effort as the support needed by each team is significant. This year many Ski-Doo Dealers banded together to help supply the resources needed to compete successfully and all can be congratulated and thanked for their efforts. Korey Cronquist, one of those dealers had this to say “We started with the best product. And we had great teamwork from everyone, starting with the designers and engineers at Ski- Doo, followed by support, before and during the race from enthusiast, family, friends, sponsors, pilots, and lastly the racers.”