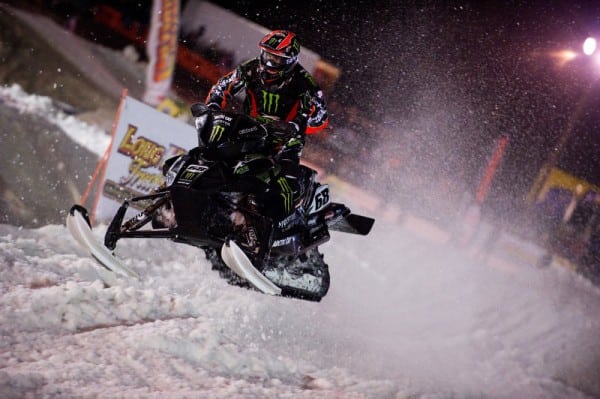 UPDATED 4.2.12 – Just got the latest update from the Tucker Hibbert camp on the “Train’s” injury. After the injury Hibbert sustained in Wisonsin (see below) all appeared to be going well for the multi-time snocross champ, but a set-back last week sent Tucker back to the hospital. Hibbert started experiencing complications from the injury and was hospitalized again Monday through Friday of last week. Now back at home, Hibbert will remain under close observation by his doctors over the coming months. There is no realistic timeline set on his return to racing motocross this summer.

“I’ve been really fortunate throughout my racing career to only have a few injuries and all of them have been either broken bones or torn ligaments,” said Hibbert. “It’s been a hard couple of weeks because internal injuries are unpredictable. I’m thankful my kidney is healing, fully functioning and that I didn’t end up having it removed. I haven’t seen the video of the crash and I’m not sure what I hit. I didn’t have one bruise or scratch on my stomach or back from the crash. I think my TekVest saved me from a much more severe injury. I’m thankful to be home again and am completely focused on my recovery.”

OSMMAG will have more updates as they become available.

ORIGINAL NEWS REPORT 3.19.12 – Just one week before the Clash of Nations Super Snowcross in Sweden, Tucker Hibbert suffered an injury while competing at the year-end International Series of Champions (ISOC) national snocross race in Lake Geneva. The Monster Energy/Arctic Cat rider was laying down the fastest laps on the track during Saturday’s Pro-Open final, when he bobbled at the base of one of Geneva’s famous downhill sections and was unable to continue. While Hibbert managed to leave the track on his own, persistent abdominal pain convinced Tucker to admit himself to the local emergency room. It was quickly determined Tucker had suffered a moderate laceration to his left kidney which caused internal bleeding along with bruising on his pancreas. He was transferred to a trauma center in Milwaukee for precautionary measures and is expected to make a full recovery without the need for surgical repairs. Tucker was fully alert during the entire ordeal and his team made it clear no head trauma was sustained from the incident. Hibbert is a tough as they come and is one of the most fit athletes in snocross, thus his recovery time should be blistering fast. However not fast enough to make the big show in Sweden, which would have been his final snocross race of the season. We will keep checking in with Tucker throughout the next few weeks to get an update and to also peek-a-boo his plans for next winter. – OSM