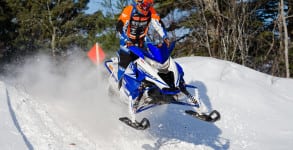 With the national snocross season underway a week prior, it was time for the natural terrain season to commence one week later as COR Powersports