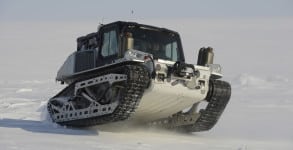 We received an interesting email this week from Polaris showing off their latest creation dubbed the Rampage. As Polaris puts it the vehicle is a